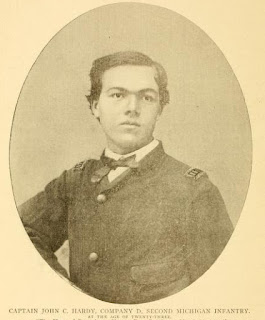 John C. Hardy, Second Michigan Infantry, Company D.
"The Hero of Petersburh Virginia, at Fort Steadman, March 25, 1865."
He enlisted April 20, 1861, at the age of nineteen.  Promoted to Color Guards March 18, 1862, the color corproal, where he did valiant service, defending the colors.  Was promoted sergeant and returned to his company and advanced step by step to the rank of captain.
Colonel March says: "The company can never pay to him, and to such as he, the debt it justly owes.  In times of danger that made the fearless quail, Captain Hardy seemed never to thank of himself, but of a soldier's duty.  I promoted him, because of his intrepid volor.  To his clear perception and quick comprechension, a half defeat was turned into stimulating victory on the 25th, of March, 1865.  His intelligence, courge, quick action on that desperate night attack of the enemy under General Gorden, stamped him a worthy successor, of the patriots of Lexington, Bunker Hill, Vally Forge and Yorktow.
﻿
Posted by Dennis Segelquist at 4:05 PM

Thanks a lot for sharing. You have done a brilliant job. Your article is truly relevant to my study at this moment, and I am really happy I discovered your website. However, I would like to see more details about this topic. I'm going to keep coming back here.
farm house karachi