STEPHEN BARLOW ESPY, Captain, was born at Espyville, Penn., June 8, 1827, being the ninth in a family of ten children. His father, Patterson Espy, was a lawyer of good education. His mother, Mercy Freeman, was a Quaker from Newark, N. J. His grandfather, George Espy, settled the hamlet Espyville in 1789, after serving through the War of the Revolution, being one of the barefoot boys at Valley Forge. The more remote ancestors on his father's side were all of Scotch-Irish Presbyterian families that settled in Pennsylvania at an early day. Captain Espy received an academical education at Franklin, Pa. In 1846 he came to Fort Madison, Iowa, where he engaged in mercantile business with his uncle and brother. In September, 1848, he married Miss Rebecca Cutler, daughter of Judge Cutler, one of Iowa's pioneers.

In the spring of 1861 he opened a general store in Shelbyville, Ill., where he was in business at the time he entered the service. He made his store a recruiting office, and soon led to the field Company G, of which he was chosen captain. Captain Espy's ability in the management of his company soon pointed him out as a suitable officer for staff duty, and he was detailed as brigade commissary of subsistence, in which capacity he was serving at the time of the battle of Chickamauga. Major George Hicks, of the 96th Illinois, in a letter to the New York Tribune soon after the battle, thus speaks of Captain Espy's conduct in the battle:

"Captain S. B. Espy, of General Whitaker's staff, was a very lion that day. He was advised to remain with his trains, but too noble spirited for that, he forthwith went on the field, and, fearless of danger, did wonders in cheering and rallying the men under the destructive fire of the enemy. He was one of Illinois' noble sons, and his loss is severely felt."

While thus gallantly discharging his duty, Captain Espy received his death wounds. It is probable that his body lies in the National Cemetery at Chattanooga, with thousands of others marked "unknown." Our country cannot do too much in honor of such heroes. He was the father of five children, the eldest of whom is the wife of Col. J. B. Morrison, of Fort Madison, Iowa. Two of his daughters, Florence Mercy and Georgiana, now reside with their mother at the same place.
Posted by Dennis Segelquist at 4:08 PM No comments:


From the seventh Regimental History.

Captain Bane and Lieutenant Stone, and fifteen men left the field a little after 9 o'clock at night, carrying one of the wounded, George Knoll, who had an ankle bone fractured. Knoll was borne on the back of Isaac Hare a mile or more to the hospital in Boonsboro.

No. 5. R. H. Bane, sergeant; elected first lieutenant at reorganization, April, 1862; promoted captain on death of Blackard; wounded at First Battle of Manassas; led the company for the remainder of the war ; died since the war.
Posted by Dennis Segelquist at 1:56 PM No comments:

Captain Eugene A. Hawkins went out with the famous Baldwin Blues as a private in April, 1861. In 1862 was promoted second and then first lieutenant of his company. Appointed A. D. C. on staff of General Doles December, 1862. Promoted captain and brigade inspector in November, 1863. Was killed at the battle of the Wilderness May 5, 1864. There was no better nor more popular officer in the brigade. He was a brave, dashing and daring soldier ; a true gentleman and a warm friend. In every battle he was complimented by General Doles for faithful service rendered, and gallantry in action.  His untimely death was deeply regretted by his comrades, and his loss to the service was great.
Posted by Dennis Segelquist at 12:04 PM No comments:

Walker, Myron P., (Mus.) b. Belchertown; 14, S.;------Belchertown ; June 4, '61; drummer boy for Co. D. 10th Reg't. M. V. M. When the war began, he was anxious to go with his fellows, but they being slow in enlisting, he accompanied a number of the Belchertown men to Springfield and enlisted, with parental consent in Co. C, where, the youngest member of the Regiment, he did his duty in a manly manner; when his enlistment was about half out, he conceived the idea of a trip home so, with his application for a furlough of twenty days in hand, he first obtained the consent of his regimental commander, thence to brigade and division commanders, and finally, to General E. D. Keyes, Commander of the Corps, all of whom consented, thus accomplishing in two hours what, through ordinary channels, would have taken as many days, possibly as many weeks; M. O. July 1, '64; went to California, '68; for ten years in the insurance business, returning to Mass. in 1878; in that decade he was actively connected with the National Guard of California, holding the Com. of Captain, June 6, '73; Major, June 10, '74; in Mass. he was Colonel and A. A. Gen'l. on the staff of Gov. George D. Robinson, '86; member of the State Senate '85 and '86; in '88 was Commander, Department of Mass., G. A. R.; in 1908, manufacturer, Belchertown, with office in Springfield
Posted by Dennis Segelquist at 1:43 AM No comments: 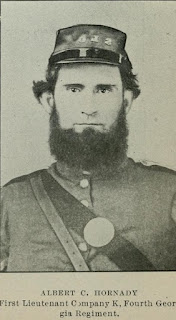 Albert was the son of Isaiah and Lavina Penelope Robinson Hornady. The 1850 census lists him as a dentist. On Sept. 26, 1855, he married Sarah "Sallie" E. Green, the daughter of Frederick J. Green, in Marion Co. He served in Co. K, 4th Georgia Inf., The Sumter Light Guards. Records indicate that he enlisted as a Sergeant, April 27, 1861. He resigned due to disability on February 9, 1863. His rank at that time was 1st Lieutenant. He was in some of the bloodiest battles in Virginia as well as Gettysburg. Albert and Sarah had the following 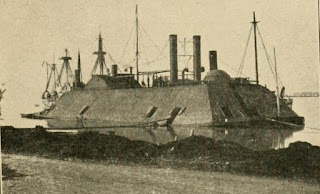 SIR: On the 31st of July last I wrote to Lieutenant-Colonel Ludlow, informing him of the charges and specifications against Spencer Kellogg. Immediately thereafter I sent for the witnesses, and upon interrogating them found that the charges and specifications were true. On the 18th of this month he was brought before a court-martial, and on the following day, upon the most ample evidence, convicted of being, first, a deserter from our service (which he at one time joined) to the enemy, and secondly, of having acted as a spy while in our service at Island Numbers 10. As you are aware, he was captured in arms against us near Baton Rouge something more than a year ago.

On the 25th of this month Spencer Kellogg was publicly executed by hanging at Camp Lee, near Richmond. Some day or two before the execution he openly confessed that he had been employed by the Federal authorities as a spy and acknowledged the justice of his sentence. I am under the impression that he left letters for his relatives wherein the same admissions are made. In my next communication to you I will forward you a copy of the order in his case containing the charges and specifications.

If you will reciprocate in such cases I will send you a certified copy of the record in his case. To my certain knowledge the evidence of his guilt was overwhelming, one of the witnesses being the lieutenant of engineers under whom he served while at Island Numbers 10. In spite of that, however, if he had not already been executed, I am sure a suspension of execution would have been ordered to await anything which you might have had to produce in his favor. His trial was fair and impartial. He was not tried before an improvised military commission, but before a general court-martial, convened months ago and composed of intelligent and honorable officers. A longer time elapsed from the time of his conviction to the date of his execution than is usually accorded to spies.

Your Government cannot complain of the fullest notice. On the 31st of July I informed Lieutenant-Colonel Ludlow that he would be tried. When you see the charges and specifications you will see they are almost copied from my letter of that date. If there was anything to be produced in favor of Kellogg it should have been presented long age. There must be, however, some mistake about the ability of his friends to show that he should not be treated as a deserter and a spy. The evidence and his own confessions settle those two facts beyond a doubt.

I will give you further information as to this case in a subsequent communication. To-night I have not the time to procure it.

Respectfully, your obedient servant,
RO. OULD,Agent of Exchange.
Posted by Dennis Segelquist at 12:34 AM No comments: