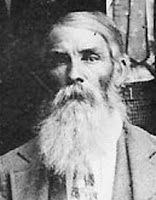 Photo provided by Kenneth A. Allgood

Enlisted in November of 1861 as a private in the Union Army, 20th Kentucky Volunteer Infantry Company H., was mustered out in January of 1865, as a private, with a honorable discharge. Between the years of 1865 and 1911, he was a farmer.
Posted by Dennis Segelquist at 2:21 PM No comments: 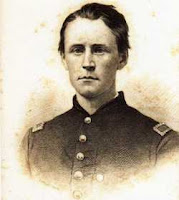 Note. These are just part of the reports.

I was told by several prisoners in Richmond that Captain Sampson, of Company A, was the first man to run away. On the other hand, it is said Lieutenant Conor, of the same company, did bravely. I am also told that Lieutenant Symonds, of Company D, was eminently cool, sedulous, and vigorous in the discharge of his duty. Sergeant Carr, of Company E, not being too sick to take the field, as were both of his superior officers, fell while bravely fighting in commanding his company. Captain J. J. Thompson, of Company H, proved himself to be a brave and reliable soldier. His first lieutenant T. T. Salter, one of my most valuable officers, I learn with much grief is among the missing. These are the only officers in the regiment worthy of particular mention excepting Lieutenant Stiles, of the Sharpshooters, who did his duty, all of it, manfully. Captain Whorf, Lieutenant Washburn, and Lieutenant Stearns were wounded before they had much opportunity to distinguish themselves. I had nearly forgotten our chivalric adjutant, who was severely wounded in the shoulder. We can illy spare his services, as he is one of the most intelligent gentlemen in the regiment and altogether the hardest working man. Assistant Surgeon Prince is a superior man. Neither shot nor shell can deter him from his duty, which he has always performed under whatever circumstances with untiring zeal. In Richmond his good qualities were pre-eminent.
I have the honor to be,
WM. S. TILTON,
Major, Twenty-second Mass., in command on 26th and 27th June.
-----------------------------------------------

The regimental reports give the full particulars concerning the killed and wounded. Captain Henry, Company H, Ninth New Jersey, was killed whilst gallantly leading his company. Captain Foster, Company D, Twenty-first Massachusetts, was severely but not dangerously wounded, and Lieutenant Stearns, adjutant of the Twenty-first Massachusetts, was hit twice in remained, his face covered with blood, with his colonel at the head of the regiment during the whole day.

By: Leon Basile
Posted by Dennis Segelquist at 4:43 PM No comments:

His Father was Levi Thompson Sr.
His Mother was Sarah Barbee. This was her second marriage her first was to David Harwood, about 1847.

He was the mayor of Gilman, Illinois for 2 terms, during which time the brick paved streets were put in. Also was the assessor for Douglas Township, Illinois for 31 years.

He served in the 113th Illinois Infantry in the Civil War.