SERGEANT LORENZO D. CUTLER, volunteered for and counted on the quota of the town of East Montpelier and when Company C was organized was appointed 5th sergeant, which position he filled with credit and honor during his term of service. On his return to Brattleboro, Vt., to be mustered out was obliged to go into the hospital and there died July 24, 1863.The Gettysburg campaign was too strenuous for his rather delicate constitution . It is said that he was buried in the Cutler Cemetery, East Montpelier, Vt. He gave up home, ambition, friends, everything, even life, that his country might not pass away without accomplishing the ends secured by the heroes of 1776.
Posted by Dennis Segelquist at 4:14 PM No comments: 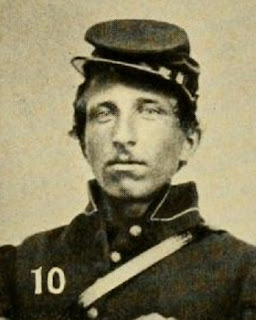 Sergeant Joseph Sawyer Sweatt, eldest son of Ira and Mary S. Sweatt, was born in the town of Boscawen, N. H., Oct. 28, 1843. He was fitted in the schools of that town and of Fisherville (now Penncook) for the Tilton (N. H.) Seminary, which he left for the purpose of enlisting in the Second New Hampshire, a three months' regiment. He was thus present at the First Bull Run.

During the retreat he was one of the many who were lost from their regiment and was reported killed, but, at length, he found his way back to his command. Upon his muster out he immediately joined the Second New Hampshire (three years) Volunteers, but soon after was taken sick, discharged, and sent home.

A little later he went to Woonsocket, R. 1., where an uncle resided, the late Enoch Sweatt, railroad contractor, and was by him employed as an assistant civil engineer. When the call came for "three hundred thousand more," he enlisted as an orderly sergeant in the Seventh Rhode Island. He was wounded at Fredericksburg Dec. 13, 1862, and was taken to Windmill Point Hospital, Md.

There his father visited him, and, after fourteen days, was able to remove him to Washington. After a brief rest he took him home to New Hampshire, but he lived only ten days after his arrival. Yet he was very thankful to gaze once more upon familiar scenes, and to die among his friends. His final and fatal illness was typhoid fever, to which he succumbed March 6, 1863. Three older sisters survive.

Posted by Dennis Segelquist at 12:34 PM No comments:

Page 279, It was a custom of the cooks late at night to visit the well just outside the stockade entrance and fill their camp kettles for the next morning's coffee. It chanced on a certain bright moonlight night the well-known and popular comrade George C. Beckford, who at that time was cook for an officers' mess, went out with his kettle at the weird hour of eleven p. m. Near the top of the slope up from the well were some scattered graves.

Now just as this man had raised his filled kettle to the well flooring he chanced to glance toward the graves, and there he saw or thought he saw a ghost looking over one of the wooden headboards. As he had been a sailor, this was too much for him. He dropped his kettle, rushed back to the fort and to his quarters, threw himself upon his bunk, drew his blanket over his head and never again went outside the fort after dark.

Page 364, During one of the terrific bombardments to which Fort Hell was constantly liable the lieutenant had the good fortune to arise from his bombproof couch just in season to escape a sixty-four-pounder mortar shell that penetrated his apartment, and, plunging directly through the bunk and its covering of blankets, buried itself several feet in the earth, and then exploded making a complete wreck of the habitation.

Cook Beckford of his officers' mess dug over the ruins and recovered what of his belongings he could discover. Among other things he brought forth an army blanket, perforated >through the center by that shell, which to-day is exhibited as evidence of a fortunate avoidance of death.

Posted by Dennis Segelquist at 11:40 AM No comments:

Elisha Maxson Palmer, son of Hezekiah Palmer and his second wife, Lydia Rathbun, was born in Hopkinton. Oct. 2, 1843. He had one sister, Mary Elizabeth, who married John Ackley of Potter Hill. They were grandchildren of Elder Phineas Palmer. Elisha received a common school education and then became a stone cutter.

He enlisted in Co. A, of this regiment Aug. 8, 1862; a half-brother, Henry C. Palmer ( Whose mother's maiden name was Abby Maxson) was a member of the same company. Tlie latter who resides at Potter Hill, has a brother Daniel also abiding there, a sister Abby J., living in the west, and two deceased brothers, Tracey A., and Edwin M. Just before the battle of Cold Harbor, Elisha was detailed as orderly at brigade headquarters where he remained until mustered out.

He was beside Major Peckham when he was shot, April 2, 1865, and was sent with him to City Point, where he continued to minister unto him until his death next day. Once more at home, he wooed and won Sarah A. Gardner of Niantic, whom he married Nov. 18, 1866. She died at Providence, Dec. 22, 1895, leaving a son Cranston Tucker who still resides in that city, and a daughter, Sarah Leona, who died in 1896. Elisha's homes have been at Niantic, until 1885, at Providence for four years, at Oakland. Pascoag, where he superintended a quarry one year (1889), at Niantic again, until 1897, and since then at Westerly.
Posted by Dennis Segelquist at 1:02 AM No comments: