Having accomplished our object, we retired within our lines, suffering a loss in our regiment of one killed and five wounded. A comrade informs me that the man killed was Lyman Mead, of Co. C, who was wounded as we fell back, and could not be brought off. The infuriated rebs were seen to rush over their work and repeatedly shoot him.
Posted by Dennis Segelquist at 7:38 PM No comments:

On Dec. 7, 1869, between twelve and one o'clock, two men entered the office of the Daviess County Savings Association. One of them asked the cashier, Captain John W. Sheets, to change a hundred dollar bill. Cashier Sheets went into the back room to get the money, when he was shot. Hearing the shot, Mr. McDowell, the only other person in the bank, turned quickly and was immediately covered. He managed however to get out of the door and gave the alarm, although pursued by one of the bandits who shot at him several times. Hastily gathering up what funds they could get quickly, they mounted their horses and rode away, closely pursued by citizens who had heard the alarm. They managed to escape. One of the horses escaped and it was afterwards proved that it had at one time been the property of Jesse James. In a letter to Governor McClurg, dated June, 1870,  Jesse James stoutly denied that he had anything to do with the robbery and murder, and said that while the horse captured had belonged to him, he had sold it prior to this time. A number of people testified that they had seen him at other places during the time of the robbery .
Posted by Dennis Segelquist at 12:11 PM No comments:


Mr. Bybee was born May 19, 1838, of John S. and Jennetta (Creed) By bee. His parents came to Missouri among the earliest settlers, and so few facilities were there at that time for housekeeping that they were compelled to do their marketing in Hannibal. Mr. B. improved a farm one and one-half miles north-west of Santa Fe,  and raised principally hemp and corn. George attended school, helping his father meanwhile with the farm until he was 17. He then worked for a year with an uncle in Fulton county. Ill, two years with his brother in Audrain county, and the war coming on, he went into the Confederate army with "Capt. Murry. After six months' service he was dischargecl at Pea Ridge and worked on a farm in the Indian Nation. Returning to Illinois, he married January 25, 1864, Miss Mary J. Powell, a native of Missouri, and farmed there until 1865, when he again took up his residence in Monroe. The following year he bought the home farm where he still lives. He is an energetic and capable farmer and stock-raiser. He deals in cattle, hogs and sheep. Mr. Bybee owns 223 acres of land, upon which he has just erected a new residence, barn, etc., causing it to present a very tidy and attractive appearance. He has a family of eight children, Isadore, Anna, Celia, Harris, Emma, Wallace, Leon and Charles. Mrs. Bybee is a member of the Christian Church.

Posted by Dennis Segelquist at 3:53 PM No comments:

At the time of this engagement the color guard had been reduced from eight members, at the beginning of the campaign, to three members. Of the three members present Corporal Burt Inman of Company H was wounded and private John Mitchell of Company F was killed, leaving only Corporal George W. Wing of Company C with the colors. Soon after the retreat began Corporal Wing, who had the flag, fell exhausted to the ground. In retreating the writer came to Corporal Wing, lying upon the ground with the colors by his side, and said to him : "Wing, can I help you ?" He replied : "No, don't mind me, take the flag." There was no time for deliberation. The flag was carried a short distance to the rear and used to rally the regiment.

.
Posted by Dennis Segelquist at 11:47 AM No comments:

The following was taken from the 43rd., Regimental History.

The only incident of general interest which happened during our voyage was an accident of a serious nature to our quarter-master, Lieut. Henry A. Turner. He, with quite a number of other officers, was on the quarter-deck, at the extreme after-end of the ship, on the most windy day of our voyage. The ship was very uneasy, making it difficult for landsmen to preserve their balance. The officers had gathered a quantity of joiner's chips, pieces of board, and the like, and one by one they were throwing them overboard, and then firing at them with revolvers, as long as they remained within easy range.

It was quite exciting sport, as the water showed where the balls struck ; and encomium or ridicule rapidly followed upon each shot, according to its success or failure.  All at once, we of the ranks, who were debarred from the official precincts above us, noticed a sudden cessation of the firing, the laughter, and talk, and it quickly appeared that the services of our surgeon were required. It proved that Lieut. Turner, while waiting for his chance to fire, had prematurely discharged his weapon while holding it downwards; aud the ball had gone through the centre of his foot.
Posted by Dennis Segelquist at 1:43 PM No comments: 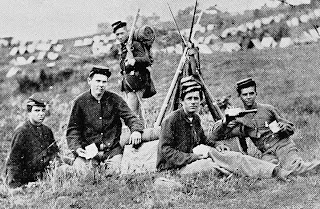 The following comes from the Regimental History of the 6th., Alabama.

Page-66.  The first illustration was that of a soldier under my command Vickers of the Sixth Alabama Eegiment. There was no better soldier in either army than Vickers. He had passed unscathed through two previous wars, in Mexico, I believe, and in Nicaragua. He was in every battle with his regiment in our Civil War until his death, and always at the front. The greater the danger, the higher his spirits seemed to soar. The time came, how- ever, when his luck, or fate, in whose fickle favor he so implicitly trusted, deserted him. At Antietam Sharpsburg I called for some one who was willing to take the desperate chances of carrying a message from me to the commander on my right. Vickers promptly volunteered, with some characteristic remark which indicated his conviction that he was not born to be killed in battle. There was a cross-fire from two directions through which he had to pass and of which he had been advised ; but he bounded away with the message almost joyously. He had not gone many steps from my side when a ball through his head, the first and last that ever struck him, had placed this brave soldier beyond the possibility of realizing, in this world at least, the treachery of that fate on which he depended.

Page 89. Private Vickers, of Alabama, volunteered to carry any orders I might wish to send. I directed him to go quickly and remind the men of the pledge to General Lee, and to say to them that I was still on the field and intended to stay there. He bounded away like an Olympic racer ; but he had gone less than fifty yards when he fell, instantly killed by a ball through his head
Posted by Dennis Segelquist at 3:48 PM No comments:

The U.S. War with Spain in 1898, was one of the briefest in our history and required the fewest men, but did not leave Scott County men untouched. When the call went out from the President that Arkansas was to provide a thousand men, five patriotic adventuresome men, who were born in this county, volunteered immediately and at least seven others are buried here.

After the war, veteran John Henry Stuedle, of German descent a native of Lafayette County, Missouri made his home Scott County. At Higginsville, Missouri on May 4th, 1898, he enrolled in Company K, 5th Missouri Volunteer Infantry and only got as far as Kentucky before being mustered out with his regiment on Nov 9, 1898. In November of 1915, he married a local girl, JohnAnna Highfill, and they lived out their life in the once thriving Greenridge settlement, now referred to as Mt. Pleasant after the church, cemetery and township.

At the age of 90, on 24 February of 1965, Stuedle walked into the office of the Waldron News, and reminisced about his military days and showed the editor, Randel Grigsby, a letter and a ribbon sent to him by the Adjutant General of the State of Missouri in honor of his service as a Missouri Volunteer in the War with Spain.

It was only a year later that on 24 February 1966, that veteran John Henry Stuedle, a first generation German American passed from this life. His father was Balshasar Stuedle from Baden, Germany and his mother was Christina Dorothea Schwab from Wurtenburg, German. Two years later his wife, “Anna” followed him in death on 12 February 1968. They were both laid to rest in the peaceful and protected Mt. Pleasant Cemetery seven miles east of Waldron.

Posted by Dennis Segelquist at 11:41 AM No comments: