Posted by Dennis Segelquist at 4:06 PM No comments:

The following information is taken from the 64th., regimental history, written by Wilbur F. Hinman, published 1897.  This book can be found and read on line.


Ohio 64th., Infantry, Regimental History.
William H. Farber, Captain, age 19; enlisted October 22, 1861; appointed Corporal October 31, 1862; promoted to Commissary-Sergeant, May 11, 1863, to First Lieutenant December 9, 1864; appointed Adjutant February 28, 1865; promoted to Captain April 26, 1865; mustered out with regiment; veteran.
Page 359, A striking illustration of faithful, patriotic devotion to duty is afforded by the sad case of Martin Bowser, Company C, Sixty-fourth. When the regiment left Nashville to enter upon the Stone river campaign, Bowser was so ill as to be unfit for duty Eager to share the fortunes of his comrades, he objected to being sent to a hospital, declaring that he would march with the company, if his knapsack could be carried on one of the wagons. Permission for this was given, and Bowser took his place in the ranks and kept it, on the march and through the terrible battle of December 31st, doing his duty with splendid courage. During the long, cold night that followed he was without a blanket.
After the brigade changed its position to the left, and the troops were permitted to rest, Corporal William H. Farber and George W. Stewart shared their blankets with him. He lay between them, one blanket being spread upon the frosty ground, while the other barely sufficed to cover the three. A few hours later, when the soldiers were aroused to stand at arms, Farber and Stewart tried to awaken their comrade, but there was no response. Bowser was dead.

Page 412, While rambling about the outskirts of the bivouac, Quarter-master-sergeant Charles H. Baker and Commissary-sergeant William H. Farber, of the Sixty-fourth, came upon two fine three year-old colts capering about in a field. Regarding it as a dispensation of Providence, to relieve them from the irksome toil of 1 hoofing it" with the train, they at once set about the capture of the animals. After some strategic maneuvering they were successful and led their "mounts" in triumph to where the train was parked. Congratulating themselves upon their "soft snap," they were busily engaged in improvising the necessary riding gear, when a well-dressed lady, on horseback, rode up. As soon as her eye fell upon the brace of colts she gave notice that they belonged to her. She said her name was Crutchfield, and exhibited a safe guard for her property, bearing the signature of General Thomas J. Wood. Of course the captive animals were instantly released and turned over to a negro servant who accompanied the lady. The next day Baker and Farber, disgusted and crestfallen, took it afoot, as usual.

Page 516, That morning Commissary-sergeant William H. Farber and John W. Leidigh, of Company C, Sixty-fourth, thought they would like to "view the landscape o'er," and so they climbed a tall tree just over the crest of the ridge. They enjoyed the scene for just about two minutes. The rebel pickets caught sight of them and promptly opened lire. Bullets whistled around and pattered against the trunk, while Farber and Leidigh scrambled down very much faster than they went up. No doubt they made even better time than Zaccheus did when directed to "make haste and come down " from the sycamore tree.


Posted by Dennis Segelquist at 3:54 PM No comments:

I will give you the information I have and let you decide who's who.


Indiana State Records
Marion Elstun, Corporal, 37th., Indiana Infantry, Co. K., Age 20,  enlisted at Lawrenceburg, Indiana, April 18, 1861.  Transferred to Field and Staff, October 19, 1863.  Died July 23, 1864, from wounds received in action July 20, 1864; Sergeant Major.
37th., Indiana Regimental History.
About 10 o'clock that morning, the 21st, Sergeant Major Marion Elston came along to the rear of Co. K, his old Company, and told us we could get beef at the rear and foot of the elevated ground. Just as he told us that, he turned to go to the next Company to the right, and as he turned a minnie bullet struck him at the side of the shoulder, and he fell to the ground. I and one or two others went to him.
The blood could be heard spurting in the cavity of his body, and he asked : "What is that?" and on being told, he said : ''Yes, that's it."
An ambulance had been brought as near as it was safe to bring it, and we carried him back and put him in it. The ambulance driver having a holy terror of bullets, drove off  before Marion got to say good-bye to us or we to him, and he waved his last good-bye to his comrades and Regiment by raising his foot up and down for several seconds. He lived but a short time after he was taken back.
Posted by Dennis Segelquist at 4:13 PM No comments:

The story of the Sultana is well known and information on its sinking can be easily found on the internet.  But what is not well known is the names of those prisoners on the ship.
At the time of the sinking there were 2,300, prisoners, passengers and crew on board   The prisoners on board were from Indiana, Kentucky, Michigan, Ohio, Tennessee and West Virginia.
As there are so many names I couldn't copy them all, so I have put down one page of the list.
This post is about the prisoners only, although I do have some of the crew, non of the passengers.
At the end of the first page you well find a list of those who were on the Sultana, but were not listed on the official list.
If you don't find you ancestor on these lists you may request a search.
When requesting a search give full name and company regiment if known, you must give the title of this post ( Exchanged Prisoners on the Sultana, April 27, 1865.), or I may not be able to help you.
My E. Mail address can be found in my profile.
OFFICIAL LIST OF EXCHANGED PRISONERS ON
THE BOAT SULTANA.
Phillips, Wm., private company C', 2d Indiana cavalry

Note.  There may be some errors in the spelling of a few names, but these are according to the official record. The same is true with regard to company and regiment.
Persons Known to have been on Board but Not Reported in the Official List.
Sanders, S. F company I, 137th Illinois 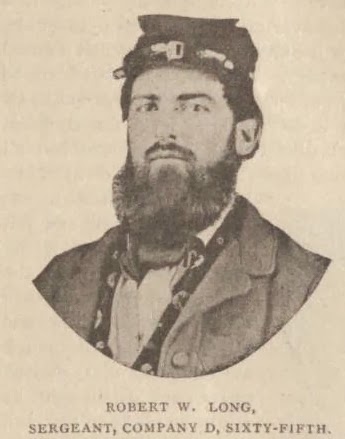 Posted by Dennis Segelquist at 1:18 AM 2 comments: