J. G. Huggins, California, Washington county, Pa., was one of the squad that went from that section, and became members of the "Plummer Guards." He was born in East Pike Run township, October 21, 183 1, where he lived and worked until he was 20 years of age, after which he worked at boat building until the call for volunteers was made. He received a common school education. When the company was organized, for muster, he was commissioned second lieutenant, which position he held until he resigned in March, 1862, at Cheat Mountain sumrait. Upon his return home he again resumed work at his trade as ship carpenter. He was married February 7, 1863, to Miss Sarah Craft, to whom three children have been born, two sons and one daughter, the latter dying when about two years old. His wife died May 17, 1876.
Posted by Dennis Segelquist at 2:05 AM No comments:

Serg. Arthur P. Lyon was killed on Sunday morning, January 15, 1865, just before the break of day, at a place called Red Hill, near Warrenton, Ala., some miles south of the Tennessee River.

Lieutenant Lyon led the advance guard of his Regiment and captured the rebel General Hylan B. Lyon, who, after he surrendered, shot Lieutenant Lyon through the head, killing him instantly. His remains were sent home by his Regiment under escort, with the message from his Colonel, "He was the bravest man in my Regiment."

Aethur once said; "There is not the rebel bullet made that will kill me."

My attention was soon called to the fact that Lyon had been wounded, and on looking up I discovered that one ball had struck the horse's shoulder, nearly disabled his left leg and covered his side with blood; another had struck Lyon's left arm above the elbow, passed under the skin, lodged between the shoulder blades, and carried with it quite a wad of clothing, making a very painful wound. While being helped on his crippled horse, from the field to the rear, he shouted to me, holding up his shattered arm: "This is good for a furlough," showing his absolute unconcern at the thought of death, and I hope changing his opinion that "the rebel bullet was not made that could kill him."

CONTENDS HE WAS YOUNGEST SOLDIER.
LATEST APPLICANT FOR THAT HONOR is C. P. HARDER, DANVILLE S POSTMASTER. ENLISTED AT AGE OF TEN.

Special Dispatch to The North American.

The distinction of having among its citizens the youngest soldier who served during the Civil War undoubtedly belongs to
Danville. It is true the honor is contested by other localities, but in every instance where the facts are verified it is found the young est soldier went into service when about 12 years old, rarely below that age.

The Danville claimant is C. P. Harder, who enlisted at the age of 10 years and 6 months. He was the youngest of five
brothers, all of whom entered the Union army.

Mr. Harder spent more than two years in the service and had the honor of being one of the boys detailed to drum on the
occasion of Abraham Lincoln s funeral.

Mr. Harder is a member of the Montour county bar. He served a term as Sheriff. He was a member of the Danville School Board and served three years as its President. He is now Postmaster.
Posted by Dennis Segelquist at 12:45 AM No comments:

I don't have any family information here, but then it's more about his service in the civil War.  However if any one has any information about him I would like to hear about it.


Simon gives his statement on beindg a prisoner of war.

I was a Corporal of Co. I., Thirty-Ninth Massachusetts Volunteers.  Was captured on the Weldon railroad August 19, 1864, and was a prisoner seven months.  Was marched to Richmond, where we were stripped naked and searched for valuables, which were all taken from us.  Was kept at Bell Isle four weeks.  The allowance of food was enfirely too small when issued, and was often withheld on the slightest pretext.  Was taken to Salisburg in freight car packed to their utmost capacity.

Was kept in the open air three months.  Were without bread or meat of any kind very frequently, having nothing but a pint of soup.  The place was commanded by Major Gee.  I suffered everthing possible, except death, for food, shelter, and clothing; when released I was attacked by a fearful sickness, caused by ill-treatment while a prisoner, from which I have never fully recovered.

Men were shot dead with the slightest provocation.  Five thousand and forty-six men died at this prison in five months.  They died by scores every day, and were carried out as logs of wood, piled on a wagon like dead hogs, and buried in a continuous ditch.
Signed, Simon Hardy, Natick, Massachusetts, October 27, 1867.
Posted by Dennis Segelquist at 3:33 PM No comments:

In the afternoon of March 7, Colonel Splaine sent for Charles S. Bolton of Company A, and said to him: "Bolton, I have your furlough at last. Here it is, and transportation also, and now I want you to take the next train for Newbern, and there board the first steamer going North." Bolton asked if the next day would not do as well. Colonel Splaine said that the soldier must go today and that the train would start in about an hour's time. Bolton said, "Well, colonel, I don't see any need of hurry about it. I have my furlough, and that is the main thing.' '

Becoming a little irritated at the obstinacy of the soldier, Splaine said, "Now, Bolton, you know that I have worked like a beaver to secure your furlough, which has been unlawfully kept from you for over a year. You know that my first official act, after taking command of the regiment,was to place you in Company A, the company of your choice at reenlistment, and which right had been denied you by officers high in rank. You are the only one of the veterans who re-enlisted in the field who has not been home to see your friends, and now here you are, with furlough and transportation in your hand, and yet you hesitate about going home."

Bolton still stubborn, said: "Colonel, you seem to be in a hurry to get rid of me. Why won't you let me remain until tomorrow?' ' Colonel Splaine said: "Now, no more nonsense about it. Start for that train and go home and see your friends while you have the opportunity to do so. This may be a very long march and as we go into the interior, circumstances may arise which will destroy your chances of ever enjoying that furlough among your friends." Bolton said: "Ah, colonel, I know what the trouble is. You know that we are going to have a battle and don't want me to take part in it, for you fear that I might not go home to my friends with a whole skin."No, No, Bolton. I simply want you to go home on your well-earned furlough, and now start for the train."

Bolton, still declining to take the advice of his commander, said he preferred to wait until the morrow. Colonel Splaine, feeling for the poor fellow, thought he would tell him something that would send him running for the train. He said: "Well, Charley, I may as well tell you â€” but you must not tell anybody else we fight tomorrow, and therefore I want you to go right home and enjoy your furlough." Bolton looked at his commander a moment, and then said: "I won't go home, but will stay with my comrades and help them to fight it out.' '

He stayed with his command, and on the morrow, in Splaine's old veteran company, Bolton had all the fighting he wanted. At one time during the day, when his company and others had captured a piece of cannon from the enemy, his command was overpowered and compelled to make a hasty retreat. Bolton, among others, was badly wounded, and in order to save himself, crawled under the bank of a stream, where he laid twenty -two hours, partly immersed in the water, and when found by his comrades next day, was more dead than alive. During his hiding he did not dare to call for help, fearing that such calls would bring enemies instead of friends.

The surgeon said it was fortunate that Bolton's wounded limb had lain in the water so long, as the chill produced by the water probably saved his life, but it was probable that amputation of the leg would become a necessity. As time went on, however, the surgeon concluded that the wounded man was doing so well that he had hopes of his recovery without having to resort to amputation.

After many weeks Bolton was so far restored to health that he was sent home on an indefinite furlough, â€” not his veteran furlough, and was finally discharged with honor from the army in which he had so bravely served.

Charles S. Bolton was a brave soldier, and later became an honorable citizen of Roxbury, Mass. He served for many years as superintendent of Faneuil Hall, but up to the day of his death was not free from suffering on account of his wound, and was compelled to wear crutches all the time. He is survived by a son, Hon. Fred E. Bolton, who is well-known among prominent Bostonians, and who, at this writing, is one of the principal assessors of Boston.

Posted by Dennis Segelquist at 1:05 AM No comments:

Colonel George Denison, born in Stonington, Conn., came from there to Hartland about 1780. He was a sergeant in Captain Elias Weld's Hartland company of militia and went with his company to Royalton on the alarm; also "to Orford on the alarm" under Lieutenant Daniel Spooner. He was the first settler on the farm owned now by Edwin Slayton. It was sold to Truman L. Slayton in 1864 by Henry C. Denison, Esq., a grandson, now of New Bedford, Mass. 'Squire Denison was a prosperous farmer well supplied with this world's goods, and it seemed a pleasure to him to assist freely out of his abundance those neighbors less fortunate. To the sick and distressed he proved himself to be a kind, sympathising, and helpful neighbor and friend. The Census of 1790 shows Colonel Denison the head of a family of eleven.
Posted by Dennis Segelquist at 3:02 PM No comments: 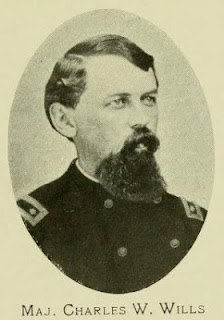 was born in Canton, III, April 17th, 1840. His parents were Andrew Wills and Eliza Brady, both natives of Pennsylvania. He was educated at the Canton public schools, and was graduated from the State Normal School at Bloomington. Enlisted at Peoria, in Co. E, 8th Infantry, April 20th, 1861, for three months, and was mustered out July 25th. He then enlisted in the 7th Cav'y, and was made Battalion Adjutant, in which capacity he served till Sept. 6th, 1862. when by order of the War Dept. all such officers were mustered out. He was elected Capt. of Co. G, 103rd Ill. Infty, Oct. 2nd, 1862, while at Peoria, and served as such till in Dec, 1865, while in Savannah, Ga.. he was elected Major. During the summer of 1863 he served on the Staff of Major General Oglesby. Was with the Command during the Carolina Campaign, receiving the Commis- sion of Lieut. Col., but was never mustered. At the close of the war he moved to La. and engaged in sugar planting. He died on the plantation at Jennerette the 24th of March, 1883. His remains were buried at Canton, Ill.
Posted by Dennis Segelquist at 12:47 AM No comments: