John R. Maybury of Company L, was in a hand to hand fight when a rebel thrust his saber through Maybury,puncturing his belt and clothing and striking his spine. 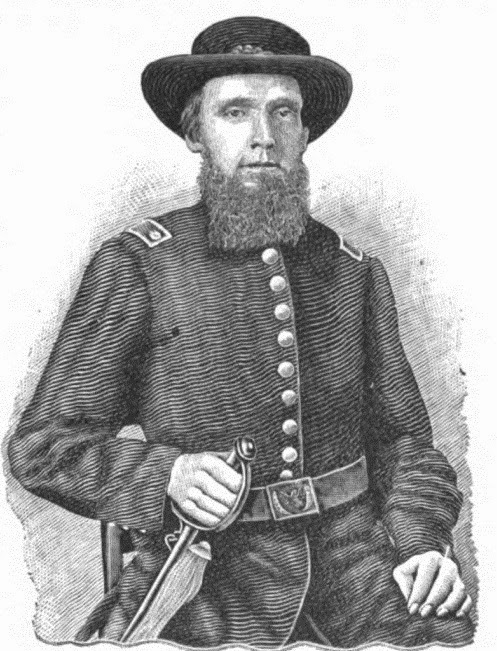 In this charge, about 6 p.m., that Captain William McGinness of H Company was wounded in the right leg by the fragment of a shell, and taken prisoner, and Corporal Peter Mulrine of the same Company was killed.  The piece of shell which wounded Captain McGinness, tore an ugly hole in his knee and injured the ligaments of his leg behind the knee. He was left on the field and captured, taken to Libby prison at Richmond, Va., from thence to Andersonville, and finally to Savannah, Ga., where, under the effects of his wound, and the treatment he received as a prisoner, he died August 31st, 1864.

The brave and good Captain McGinness now peacefully sleeps in the beautiful cemetery at Savannah, Ga., near the broad Atlantic, whose wild majestic waves sing his requiem, as they beat up against
the sandy shore. He was cheerful and gallant, and his death was sincerely and deeply deplored by all the members of the A braver soldier never buckled on a sword nor handled a musket. Three of his sons were in the war for the Union—two of them belonging to the Forty-fourth and the other to the One hundred and thirty-seventh Indiana Regiments.

To perpetuate the memory of Captain McGinness, the G. A.R. Post of Roanoke, Huntington county, Indiana, has assumed his name.
Posted by Dennis Segelquist at 11:27 PM No comments:

Among those who fell to rise no more in the first victorious charge made by the 81st Ohio, was Captain Charles Lane, commanding Company K. A rebel bullet pierced his head, and his death was instantaneous. To say that he died at his post in defense of his country, gives him an immortality of honor on the bright roll of his country's heroes ; to say that he was beloved by his men, and respected by his fellow officers ; that he was one of the very few in the army possessing firmness sufficient to resist its temptations; that his private character was stainless^ that his example was that of a noble Christian soldier all this may render his memory dear to his friends, and reconcile them in part to his loss. But around his widowed and orphaned hearthstone are lonely hearts gathered to whom no eulogy can bring the balm of consolation. Theirs is a grief too sacred and tender for h II man touch.

Mr. Beauchamp lived in Ennis, Texas,was a business man, being the proprietor of the  Ennis House.

Ennis a town of 250 inhabitants, not nine months old is well located,far enough from any other town, is 96 miles from Sherman, 726 miles from St.Louis, 282 miles from Galveston Texas.


Posted by Dennis Segelquist at 1:50 PM No comments:

New York State Records.
On the State record his name was spelled "Biegle."

Posted by Dennis Segelquist at 1:01 PM No comments: