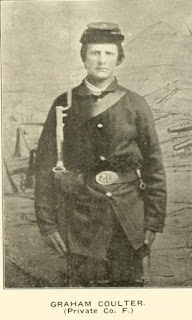 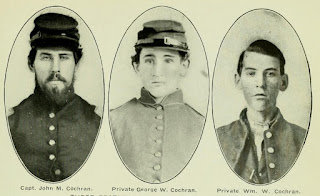 Posted by Dennis Segelquist at 3:30 PM No comments:


The following men of the seventh Indiana Cavalry were on the Sultana on the night of the explosion according to the regimental history there were about 30 men from the seventh on board however only ten are known.  There is a very good and sad story on the explosion of the Sultana, by Thomas S. Cogley the book is called ( The History of the Seventh Indiana Cavalry), pages 184-187.  This book can be found at the site of (E Books Open Library.)

William Barrick, Co. I., No info found on him.

Elisha Swords, Co. I., no info found on him.

Robert B. Armstrong, Co. I., no info found on him.

Authors note.  Only the names were recorded in the regimental history, the rest of the information came from the Indiana State Archives.
Posted by Dennis Segelquist at 3:46 PM No comments:

The following was taken from the 112th, Illiinois Infantry Regimental History.

At 1 o clock moved from Columbus and ran without change to Bellair on the Ohio river, arriving there at 6 o clock on the
morning of the 23d. Crossed the river, by ferry, to Benwood, West Virginia, and breakfasted, and at 10 :30 again took cars on the Baltimore and Ohio Railroad, and at noon moved eats. The weather was extremely cold ; and the change from South ern Tennessee to a northern latitude told severely on the men. The cars were ordinary freight cars, and of course had no stoves. Necessity is frequently the cause of mischief, as well as the mother of invention. At Piedmont, in West Virginia, our train met a west bound freight train. The trains stopped but a few moments, but long enough for some of the boys of  Co. A, of the 112th Illinois, to confiscate a stove and its pipe in a box car on the freight train, and transfer it, unobserved, to their car. Philip J. Wintz got a wrench and loosened the nuts on the bolts that held the stove to the floor, and others stood ready to assist in removing it. In the meantime others were obtaining fuel. As soon as the train was under way a stove-pipe hole was cut through the car roof and a tire built. It is not known what was said by the conductor and brakes men of the freight train when they discovered their loss. If  they consigned the boys to a warm place, it was no more than they deserved, and had already obtained. Such enterprise etitled them to fire, and they had it.

Posted by Dennis Segelquist at 1:43 AM No comments:

He entered the service from Somersworth as First Lieut, of Company F, and in August was promoted to Captain. Before leaving the Peninsula he had heen appointed Lieut. -Colonel of the F.leventh N. H., but determined to go through this campaign with the Secmd before joining his new command. In the charge over the railroad he was severely wounded and left in the hands of the enemy. He lay upon the field several days, until rescued by a Union relief party, and lingered until September 17, when he died. The above portrait, furnished by Littlefield Post, (J. A. R., of .Somersworth, is a copy of the picture hanging in their post room.

From the Official Records.
In the death of Adjt. Morris Baxter we lose a noble man, brave to rashness in battle, energetic and efficient in camp.

I have done a couple posts on Morgan's cavalry before but I ran across this pece and found it interesting, and I thought you may too. 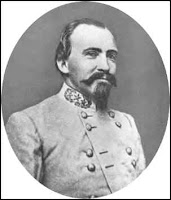 John H. Morgan was reared in Kentucky. When nineteen years of age he enlisted for the Mexican War and was elected first lieutenant of Captain Perry Beard's company of Colonel Humphrey Marshall's regiment of Kentucky cavalry. His brother Calvin and his uncle Alexander G. Morgan were members of the same company. His uncle was killed at Buena Vista, in which battle Colonel Marshall's regiment was hotly engaged. Soon after his return home he married Miss Bruce, of Lexington, a sweet and lovely lady, who, almost from the day of her wedding, was a confirmed and patient invalid and sufferer. Immediately after his marriage, he entered energetically into business; was industrious, enterprising and prosperous, and at the breaking out of the war, in 1861, he was conducting in Lexington two successful manufactories. Every speculation and business enterprise in which he engaged succeeded, and he had acquired a very handsome property. This he left, when he went South, to the mercy of his enemies, making no provision whatever for its protection, and apparently caring not at all what became of it.
Posted by Dennis Segelquist at 4:16 PM No comments:

Samuel Charles Ilgenfritz was the son of Samuel & Lydia Imfelt Ilgenfritz and the husband of Harriet C. Weiser Ilgenfritz, whom he married August 29, 1866.

Comrade Samuel C. Ilgenfritz, of Company B, was then introduced and spoke as follows :

"My Comrades, it is late and my speech will be short and sweet. Apart from my own Company I know but few ; nevertheless by virtue of our identification with the 187th Regiment, I know every one of you whether I can call you by name or not.  You have made me your Historian. Why, I cannot say. All that I have done along that line was the publication of an eightcolumn sketch of the Regiment in the York Daily, which was simply my own observations upon its inception, service and immolation, for the defense of the flag. Reminiscences of the camp, the march, the picket, and the battle are pleasant 34 years after the conflict in which we stood shoulder to shoulder battling for our country. I am sure that we have to-day something better and greater challenging our attention and thought. That Comrade to my right hit the nail square on the head when he said we made history. Yes, this gallant old 187th Regiment, as an integral part of the Army of the Potomac, made history.

Now, it does not take three or five or ten years to do this. The actual fighting service of the Regiment only spanned from Petersburg to the Weldon Railroad, but it came into service in an hour when the result was trembling in the balance ; at a time when hours and days and months made history with wonderful rapidity in their sweep down the last thirty-four years. As it stood, superbly stood, receiving its baptism of blood before Petersburg, June 18, 1864, losing 200 of its intrepid sons, more than all the other Regiments of the Brigade combined, and more than any Regiment in the Fifth Corps, I do not know but this single heroic act may have been the boys' push that moved the forces of Union along the line of the Weldon Railroad, to Five Forks and the salvation of the Union at Appomatox, the 187th Regiment contended for a great and far-reaching principle.

What is a principle? A truth received, believed and fixed in the mind from which there flows out a corresponding course of action. When this Regiment marched to the defense of the imperiled interest of its country, it received and wrote upon its colors,' a great truth, namely, the principle of national sovereignty, i. e., This is a nation, not a compact, a rope of sand, that may be snapped asunder by the mere whim of any one ; nor set of States, but a nation possessing the power to defend, preserve and perpetuate its life. And its organization, and camping, and marching, and picketing, and fighting, was the course of action which flowed out of its reception of the truth of national sovereignty, and that made it give the health, and limb, and life, of its gallant boys in defense of the best Magna Charta the world ever saw, and characterized by DeAubigne, as the standing miracle of history, and which Buckley says should be hung up in the nursery of every king, and blazoned on the porch of every royal palace. This sheet anchor of our liberties has gone beyond the environments of our civil strife;  yes, the actors in the conflict of the sixties must pass away, but this will go out and onward until civil, political, and religious liberty shall girdle the nations as the undisputed right of all peoples. And here this grand old Pennsylvania Regiment made history, that has, and will continue to have a tremendous sweep down the ages for the good of mankind, while the luster of an imperishable glory shall abide with the 187th, its posterity, and Pennsylvania forever.

"Led by the dauntless Chamberlain, the gallant Griffin, the superb Warren, and the cultured Meade, to the defense of the national sovereignty, we need not blush to say that we belonged to the 187th Regiment, Pennsylvania Volunteers. Contending for this great basic principle of the Government, it makes a vast difference as to whether we fought for or against 'Old Glory.' We dare not speculate as to who was right in the conflict. The North defended a de facto Government and it was eternally right. The South fought for a de jure Government, which they could not make a fact, and this was a rebellion, and those who engaged therein were Rebels, and hence they were eternally wrong, and being wrong, the sun of the heresy of State sovereignty set in blood at Appomatox forever. I would like to say much more, but that clock bids me cease. My Comrades, farewell, and may God be with you till we meet again. Tell the story of your cares, toils, and hardships, sacrifices for the land and flag you loved and" served', but above all cherish this thought, namely, that the 187th Regiment, Pennsylvania Volunteers, made history on whose pages will be read the principles for which we fought by millions yet unborn; truths that shall live and bless the world when we are sleeping in patriots' graves."
Posted by Dennis Segelquist at 1:26 PM No comments: