Civil War and Spanish-American War figure. In 1864 he participated in the Northwest Conspiracy, a failed attempt to free Confederate prisoners of war from Camp Douglas near Chicago. Led guerrilla force to burn supply boats at St. Louis wharf.

He was captured in Indiana in 1864 and was sentenced to death and spared only at the personal intercession of president Abraham Lincoln. After Lincoln's assasination, Castleman was deported to France, returning to Louisville, Kentucky in late 1866 after a pardon from president Andrew Johnson.

In 1878, he revived the Louisville Legion of the Kentucky Militia. Appointed adjutant general of Kentucky in 1883. In 1898, Castleman led the 1st Kentucky Volunteer Militia in the invasion of Puerto Rico during the Spanish-American War. He later served as the islands military governor.


History from Confederate Operations in Canada and New York.

Capt. John B. Castleman is a member of the firm of Barbee & Castleman, which has represented the Royal Insurance Company of Liverpool, for all the Southern States since the war. He was colonel of the Louisville Legion for many years, and twice Adjutant-General of Kentucky.

Colonel Castleman commanded the Louisville Legion in the Spanish American war, serving on the expedition of General Nelson A. Miles in Porto Rico. On his return from Porto Rico, Colonel Castleman was commissioned a brigadier-general by President McKinley. General Castleman has been president of the Board of Park Commissioners of Louisville since the creation of the board. Resides at Louisville, 1906.
Posted by Dennis Segelquist at 1:41 AM No comments:

He served in Company C, 11th Tennessee Infantry Regiment, Confederate States of America. He was a member of Forbes Confederate Veterans Bivouac, in Clarksville, TN.
Posted by Dennis Segelquist at 11:55 AM No comments:

Daniel Farrar, M. D., was born in Troy and was the sixth physician to locate in the town. He graduated from the Harvard Medical School in the spring of 1862. He was appointed Assistant Surgeon of the Third New Hampshire Regiment, Ang. 13, 1862, and arrived at the regiment about the middle of September, 1862. His jjosition at this time was an anomalous one, as in his appointment a vacancy was anticipated in the medical staff and soon after occurred. He began his duties at once and performed them well. In the spring of 1868, the regiment was scattered, two companies being at Hilton Head, S. C, seven companies were at Pickney Island and one company at Pope's.

Dr. Farrar remained \vith the two companies at Hilton Head, on April 15, 1863, after the regiment had gone to Edisto Island, Dr. Farrar was ordered to special duty, taking charge of the sick at the outposts of Hilton Head (Seabrook, Fort Mitchel, Pope's, Jenkin's Island and Spanish Wells), with headquarters at Pope's. He had scarcely entered upon these duties when he was relieved by an order relieving everybody in the brigade of which the Third New Hampshire was a part.

He rejoined the regiment at Edisto River, and not being in good health very soon after sent in his resignation, Which was not accepted. He repeated the act at once and was honorabh discharged, on surgeon's certificate of disability, at Botany Bay Island, on May 4, 1863. Upon his return home he commenced practice here. Not being Physically strong he could not endure the rides over this hilly country, and he gave up his practice sometime in 1865, and afterwards removed to Leominster, Mass., where he continued in practice till his death, June 3, 1875.

Posted by Dennis Segelquist at 12:38 PM No comments:

Here is a list of about 83 Bartenders  and 71 Saloons, there is no information on the names.  This list is to help find a ancestor and learn where he or she was  at this time in history.  The City Evansville, Indiana, the year 1888.

A note about the Saloons of Evansville and there were many and I bet you get a picture of what they may look like but you would be wrong. The saloon as we know them wasn't the only saloons in town.  There were saloons in Boarding Houses, Billiard Rooms or Halls and Groceries Stores. One could get a bottle of beer or a glass of wine about any place in town.

The saloon list which there are three, were copied from the City Directory and you may not be able to enlarge them enough to read. In this case you may copy them so you can enlarge  them your self.  No need to ask its ok.  In fact all the information an pictures at this web site are free to any one to copy.

Saloons.
There are no names of the saloons just those of the owners, saloonkeepers and so on.
push any picture to enlarge. 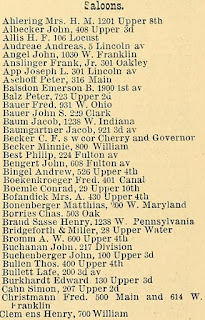 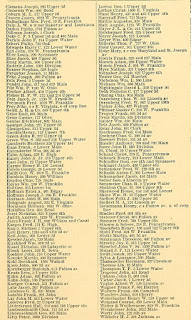 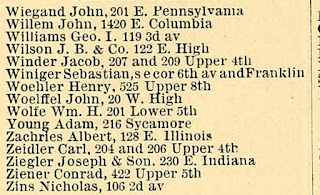 Posted by Dennis Segelquist at 11:52 AM No comments:

The first Sheriff of Eastland was born in Arkansas, December 28, 1843. He enlisted in the Confederate Army (1861) as First Lieutenant in the 7th Arkansas Regiment, and served until the surrender in 1865.

In 1868 he came to Eastland and engaged in the cattle business.  When the County was organized in 1873, he held the office of Sheriff for eight consecutive years. He has been merchandizing since his term of office expired. He is a member of the Christian Church.

Mr. Schmick was a Civil War Veteran, and listed in the 7th., Arkansas Infantry Co. E. C. S.A.  His head stone say's the same.  Whoever He is not on the roster.  There was a Henry Schmick, in the 7th., only in Co. A, as a Private.

Henry S. SChmick is listed in the 38th., Arkansas Infantry Co. E as a Second Lieutenant.
Posted by Dennis Segelquist at 1:41 AM No comments: