Absalom became a sawyer and owned a sawmill, unknown location, probably in New York
He may not have known it, but he was a Mayflower descendant of Georg Soule.
He died Feb 11, 1916

Absalom's  bugle, I believe,  stayed in the family, and my brother, William T. Rexford, had a family bugle( that probably came from my grandmother Rexford's house)  in 1974 when my dad was stationed at Hanscom AFB in Massachusetts.  One evening my brother blew "Taps"  perfectly at twilight in our neighborhood, and you could hear the neighbors applauding.  I don't know what happened to the bugle after that (we didn't know then what the connection might have been) and my brother passed away in 1985. 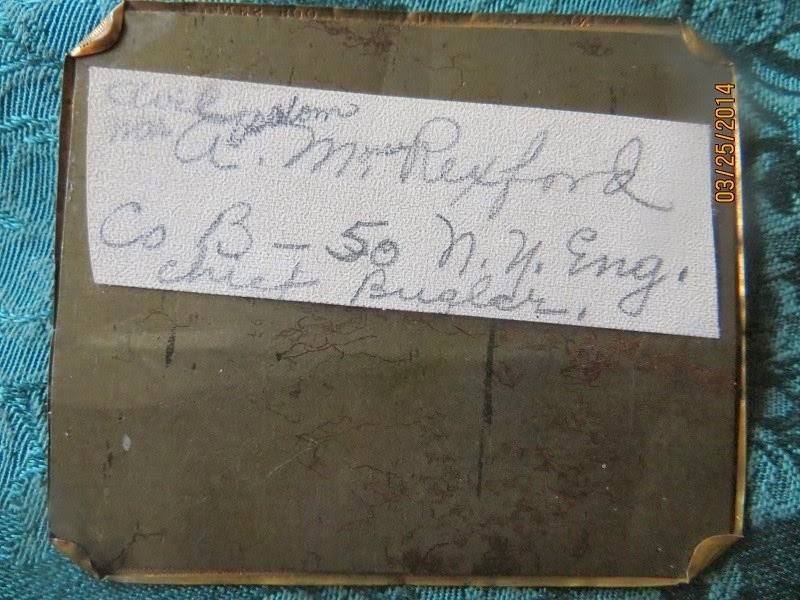 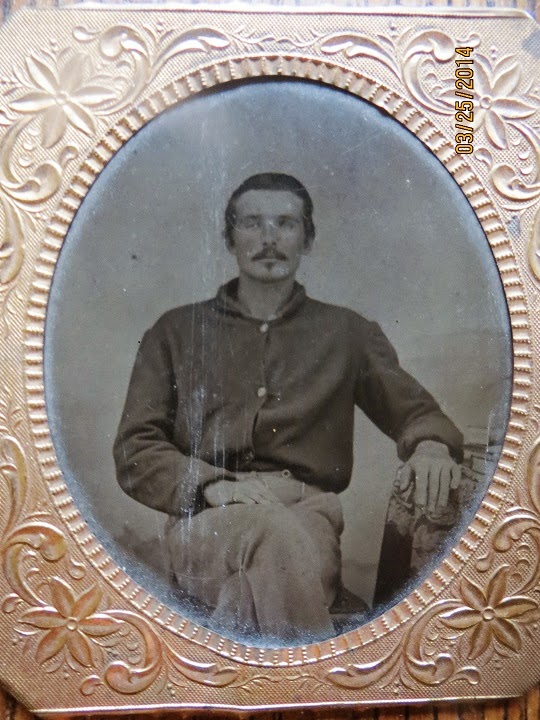 Duty at Alexandria, Va., till March, 1862, and at Washington, D. C., till March 18. Moved with Army of the Potomac to the Virginia Peninsula. Siege of Yorktown April 5-May 4. Advance up the Peninsula and constructing bridges on the Chickahominy River May. Battle of Fair Oaks, Seven Pines, May 31-June 1. Seven days before Richmond June 25-July 1. Battle of Seven Pines June 27. White Oak Swamp and Charles City Cross Roads June 30. Malvern Hill July 1. At Harrison's Landing till August 16. Moved to Washington, D. C., August 16-22. Maryland Campaign September-October. Operating at and about Harper's Ferry, W. Va., and Berlin, Md., during and after the battle of Antietam. Threw two pontoon bridges over the Potomac River at Berlin, Md., for the crossing of the Army of the Potomac in their pursuit of Lee from Antietam. Rappahannock Campaign November, 1862, to June, 1863. Battle of Fredericksburg, Va., December 12-15. "Mud March" January 20-24, 1863. Chancellorsville Campaign April 27-May 6. Operations at Franklin's Crossing April 29-May 2. Maryes Heights, Fredericksburg, May 3. Salem Heights May 3-4. Banks' Ford May 4. Operations at Deep Run Ravine June 5-13. Gettysburg (Pa.) Campaign June 13-July 24. Battle of Gettysburg, Pa., July 1-4. Bristoe Campaign October 9-22. Advance to line of the Rappahannock November 7-8. Mine Run Campaign November 26-December 2. Campaign from the Rapidan to the James River May 3-June 15, 1864. Laid all bridges for Army of the Potomac during the Campaign. Battles of the Wilderness May 5-7; Spottsylvania Court House May 8-21. To expedite the transportation of wounded three Companies made a forced march to Fredericksburg on May 10, starting at 11:30 a. m. Built bridge over the Rappahannock at Fredericksburg Lower Crossing, having it completed and ready for use at 4:30 p. m., having marched 8 miles and built bridge 420 feet long in 5 hours. North Anna River May 23-26. On line of the Pamunkey May 26-28. On line of the Totopotomoy May 28-31. About Cold Harbor June 1-12. Crossing of James River June 15. Before Petersburg June 16-18. Siege operations against Petersburg and Richmond June, 1864, to April, 1865. Jerusalem Plank Road June 22-23, 1864. Demonstration on north side of James River July 27-29. Deep Bottom July 27-28. Hatcher's Run February 5-7, 1865. Appomattox Campaign March 28-April 9. Fall of Petersburg April 2. Appomattox Court House April 9. Surrender of Lee and his army. (Co. "I" march to Danville with 6th Army Corps April 23-27.) Mustered out at Washington, D. C., June 13, 1865.

Will searching through some medical journals I ran across this first note on midwife's and found it interesting.  When searching for surnames I look into books and many different kinds of records, but I never thought of the subject of midwifing.  I looked in many medical journals and found a lot of cases on the midwife's however hardly any names were given only what went right or wrong.

When reaching more I found that there were hundreds if not thousands of books and articles written of the subject of the midwife.  I found it would take me weeks if not months to compile a list of names.  So I will leave the subject with these few names.  I hope these few names will peck your interest and make you want to look into it more.

Margaret Cobbe, who officiated at the birth of King Edward V. in 1470, and received a salary of £10 per annum as royal midwife, which appears to have been .the usual sum granted at that period ; the same having been given in 1503, to Alice Massy, midwife to the Queen of Henry VII. Women in this capacity also received perquisites in the form of money and presents at weddings and baptisms ; but the fees paid by private parties for services were usually ridiculously small.

Catherine "Kate" Cruikshank was born on 14 February 1837 in Lee County, Iowa. Her father, Alexander, was a native of Norway, while her mother, Keziah (Perkins) Cruikshank, came from Kentucky. The family included seven children. From a biography of James Cruikshank, Kate's older brother, we know that the Cruikshank children had access to several years of schooling and were raised as Methodists. In 1864, one month before her twenty-seventh birthday, Kate married Samuel Dunlap, an Ohio native. He was thirty-eight and had worked as a teacher at the Indiana Deaf and Dumb Asylum. Three months after their marriage the couple left Iowa for Bannack City, Montana Territory. Although mining conditions were quite favorable in Montana in the 1860s, the Dunlaps operated a drug store. Samuel also worked as a stock raiser, and Kate taught at a subscription school in Nevada City. Kate bore seven children before Samuel died in 1878, only fourteen years after their marriage. Kate remained with her children in Bannack, Montana, for five more years before moving to Junction, Idaho, in 1883. She operated a drug store and also worked as a midwife and practical nurse. She died in 1901 and was buried at Salmon, Idaho.

Thomas Bishop wife sometimes served as midwife for the slaves and servants on the Mount Vernon plantations.

Catherine Skinner, Idaho Springs, Clear Creek County, Colorado, was a will known midwife of the 1800's.

Sarah Owenes against the estate of William Christian.
Bill for the amount of 0-15-0 (fifteen shillings) owed to midwife Sarah Ow[enes] for delivering the child of William Christian's slave Pole [Polly?] in May 1792; statement and receipt signed by Robert Mosby and James Lock January 4, 1793; [page 2] January 2, 1793, request from Sar[ah] Owenes to Richard Woo[lfo]lk for payment.

Posted by Dennis Segelquist at 2:36 PM No comments:

Reuben H. Holladay, age 19 years, Private, Co. A., 24th., New York Cavalry, had a gun shot flesh wound of the left thigh.  The wound was caused by a minie ball, at the battle of Hatcher's Run, Virginia, February 7, 1865.
Posted by Dennis Segelquist at 3:46 PM No comments:


The following letter was written in 1912.

Mrs. M. J. Eagan, of Crystal Springs, Miss., desires to recover the sword of her father, Lieut. Thomas H. Lewis, who was killed in the battle of Shiloh. The sword was then given by her mother to Capt. Tol Lindsey, Company F, 6th Mississippi, who was also killed in some battle. Information about his sword will be very much appreciated by her.

Authors Note.  It would be interesting to know if it was ever found.
Posted by Dennis Segelquist at 12:30 AM No comments:

Civil War Soldiers And Their Injuries.

2. Charles H. Shields, Private, 6th., Maine battery, age 21 years, was injured by the explosion of some cartridges during the battle of the Wilderness, May 6, 1864; wound burns to the face, ears burned off, discharged from the service for disability June 13, 1865 and pensioned.

3. Charles Withee, Private, 1st., Wisconsin battery, was severely injured by the explosion of a caisson during the battle of Big Black River, May 18, 1863, was burned in the face, hands and both arms.  Died on June 15, 1863.

4. R. A. Runion, Private, Co. I., 68th., Indiana Infantry, age 24 years, had his feet scalded.  The injury was caused by the upsetting of a pot of hot coffee.  After being admitted  into the hospital became more sick and died on March 8, 1863.  Note. This name wasn't found on any companies or regiments rosters.

8. Abraham Bickel, Private, Co. K., 142nd Pennsylvania Infantry, age 29 years, received a server injury during the march to Gettysburg, the accident incurred while a fence was being knocked down.  He was struck with the butt end of a musket in the lower part of the abdomen and forcing his right testicle back into the abdomen.  Discharged December 16, 1863, and pensioned.

11. Laban Swafford, Farrier, Co. G., 9th., Indiana Cavalry, age 36 years, was hurt at Pulaski, November 8, 1864, by his horse falling and throwing him upon his left shoulder, dislocating the joint, transferred to the Veteran Reserve Corps, May 11, 1865; mustered out of the service September 4, 1865, was pensioned, pension paid on December 4, 1880.
Posted by Dennis Segelquist at 6:32 PM No comments: