Joined the 33rd WI. Vol Inf at age 17 with his younger brother, after the war he speculated land in Texas, lived in Texas, Washington, Iowa and Wisconsin Wrote a small book about his war experiences as well as several other works buried in a common grave with his brother

Authors note.  This book can be found and read on line.

The following is from his book, it tells what happen on his first picket duty.

On the 12th of October, 1862, I was detailed for the first time on regular picket duty and placed out as sentinel on the outside line, and I vividly remember that night. We were on the main pike road to
Holly Springs in an oak forest, perhaps a mile from our camp. My turn came for outpost at 10 p. m. to 12 m. It had rained all day and the night was very dark. I had a beat of about 200 yards to walk and
pass the word to comrades on adjoining beats, "Who comes there?" Answer, "All is well." We could sarcely see the form of a man ten steps distant. I was making my return to the road to my right when
I saw the form of an animal I took to be a horse coming in on the road. I commanded "Halt!" It paid no attention. My next command was "Halt! Who comes there?" cocking my gun at the same time, but
the object still came on, and another showed up in the rear. I fired with the third command and brought down the leading object, and there was a scurry through the woods of several sounds on the run. I reloaded before I advanced on my prey and walked up stealthily at bayonet charge upon my enemy. To my surprise, I found I had killed a calf.

I had an attack of the buck ague all the balance of my two-hour stand, and I was the jest of the camp the next day.
Posted by Dennis Segelquist at 12:29 AM No comments:

Here is aa short that comes out of the 14th., North Carolina Infantry.
Mince Pie.

''Two boys came into camp one day selling" mince pies. Two soldiers bought one, ate, smacked their lips, pronouncing: it's good and wished for more.  Before the boys got out of hearing they got into a dispute about the division of the money. The smaller boy cried and said it was his puppy that was killed to furnish material for the pie and he was entitled to his part of the proceeds. The soldier boys would have been glad to have parted with the puppy dog, but it had come to stay.
Posted by Dennis Segelquist at 10:12 AM No comments:


The following was taken from the 43rd. Regimental History.

This the most of us believed to be true, till after the action, when we were informed that a ball had glanced from a tree, and passed between his arm and body with sufficient force to cut his clothes, and slightly wound his side. He was not disposed to leave the company ; but his comrades, seeing the torn clothing, insisted on conducting him to the field-hospital. When his garments were removed, the ball dropped to the ground, upon which he immediately returned to his place in the ranks.
Posted by Dennis Segelquist at 2:40 PM No comments:

The following is taken from the 56th., Regimental History.

At 1 o'clock p. m., and in one of these attacks they killed Tom Morris of Company C, our former brave drummer boy, who, in 1862, in back of Memphis, took the arms and equipments of the fellow who was afraid, and carried them to a good purpose to this eventful day, when, in his daring recklessness, he disdained the good protection afforded by the cotton bales, and stood up fully exposed and fired at the enemy, who lay behind the levee. He was shot through the brain, and in his death a mere boy, that he was, the Union lost one of its bravest defenders.
Posted by Dennis Segelquist at 12:02 AM 2 comments:

The following was taken from the 44th., Regimental History.

At daybreak, on the 19th, as soon as our line was seen by the enemy, we received a severe fire of musketry and artillery. Corporal Darling of Company E was shot through the head and instantly killed as he was looking over the breastwork. As he was the tallest Corporal in the Company.
Posted by Dennis Segelquist at 11:14 PM No comments:

James Mcginnis was born in Philadelphia in 1861. On august 31st 1861, he enlisted into the 23rd Pennsylvania Volunteers, "Birney's Zouaves". He served his three year enlistment and survived the War. On August 25th, the regiment was on thier way home to Philadelphia, for muster out. The boys were trying to make a grand entrance into the city by riding on top of the box cars. James was killed when he slammed into the Grays Ferry Bridge while riding on top of the box car. Joy turned quickly to grief for his family that awaited him at the depot.

The following was taken from the 55th., Illinois Regimental History.

During the conflict on Sunday a musket ball ploughed through the scalp of James Garner of Company C, which stunned and prostrated him. About half an hour afterward he recovered sufficiently to rise to his feet, but consciousness of the situation dawned slowly. Just as the regiment commenced to retreat, one of his comrades called out to him, "Come, Jim, we are going back;" to which Jim replied, "Ain t I killed?" His commanding officer, Lieutenant Shaw, adds that Garner, "on being assured that he was not killed, joined in the retreat, and ever after, as before, proved himself a live soldier in every respect."
Posted by Dennis Segelquist at 4:09 PM No comments: 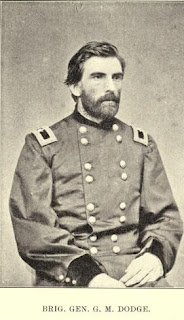 The following was taken from the history of the seventh Iowa Veteran Volunteer Infantry, by H. I. Smith Plub. 1903.

Private Cahill, Co."I," a little Irishman, was shooting through the hole. I told him to step to one side and let Gen. Dodge look through,and he did so. I looked first to see if all was clear, and stepped back and the general stepped in my front, and just as he was looking through, a minnie ball came through the loop-hole and struck the general in the forehead, peeled a ribbon off his scalp laying his skull bare; glanced off the top of his head and went through the top of his black slouch hat he wore. He fell across my feet pinning me fast in the ditch; he quivered and bled, and I supposed he was killed. I sent two men to the rear for a stretcher, and the men released me and we watched him with no expectation that he would ever revive.

After the general was taken off I picked up a piece of his scalp with the hair on it, and after the war brought it home and kept it a number of years. The look-out hole in the works was made by splitting a piece off the corner of an empty pine cartridge case, V shaped, laying it on top of the works and covering it with dirt. The bullet struck the pine board and glanced to the general s head, which saved his life, as the force of the ball was partially spent when it struck him.
Posted by Dennis Segelquist at 12:05 AM No comments: