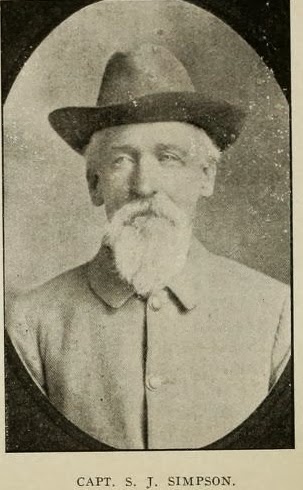 "Capt. Samuel J. Simpson died on January 19. 1910, of heart failure, aged seventy-five years. A native of Warren County, Va., in the spring of 1861 he enlisted as a private in the first cavalry company raised in his county, which became Company E, 7th Virginia, and attached to Gen. Turner Ashby's famous command. At the reorganization for his soldierly qualities he was elected first lieutenant, and was later promoted to captain.

He was an ideal 'beau sabre.' No odds deterred him; and while his courage often seemed recklessness, it was tempered with a cool head which no crisis disturbed, and his war record was second to none of his grade Gen. William E. Jones, his brigade commander, Said of him.

He was the best soldier I have ever seen, regular or volunteer. After the close of the war Captain Simpson beat his sword into a pruning hook and became a tiller of the soil, and his courage in peace was as great as in war. His inherent modesty was such that it was difficult to get him to speak of his achievements, as he considered his service only a compliance with the duty of every son of Virginia.

In private life his integrity knew no compromise, and his hospitality was never appealed to in vain. As a member of the Camp he was an ardent supporter of any measure tending to the comfort and interest of his old comrades, and in cases of their need he was foremost in contributing liberal aid in proportion to his means. He was buried beside his wife by the Camp, his pallbearers being selected from its members. The firing of three volleys over his grave was by a squad from Company D, 2d Virginia Regiment.
Posted by Dennis Segelquist at 4:37 PM No comments:


This picture of Capt. William Ratliff, of Fannin, Miss., was sent by his niece, Mrs. Lou Ratliff McClellan, of Coleman, Tex., who wishes to hear from any of his comrades of the war now living. While she is not able to give the command with which he served, she says Captain Ratliff was known as one of the bravest of cavalrymen, and would go into battle waving his hat and urging on his men. In this brave attitude he was shot from his horse and taken off the battle field as dead; but he came to, sat up, and spat out the ball which had laid him low. He was sent home to recover, and it was months before he could return to his command. His dash and daring caused him to be nicknamed "Hurricane Bill."
Posted by Dennis Segelquist at 1:23 AM No comments:

The Heart of a Soldier.

I ran across this advertisement in the ( Confederate Veteran Magazine ), 1913.
It was written by General George E. Pickett, in 1913.  The add says it all.  I looked to see if I could find the book on line and found it was and can be read on line.

Those of you who would like to see a picture of him and learn more about him and his wife's names and children's names can do so by taken this link.
http://www.findagrave.com/cgi-bin/fg.cgi?page=gr&GSln=pickett&GSfn=george&GSmn=e&GSbyrel=all&GSdyrel=all&GSob=n&GRid=812&df=all&

Posted by Dennis Segelquist at 4:40 PM No comments:


William Marion Seay, Adjutant of Garland Rodes Camp, U. C. V. , Lynchburg, Va., was born in 1842, and had hardly completed his course at Lynchburr College when in June, 1S61. he entered the Confederate service as sergeant in the Lynchburg Rifles, or Company E, 11th., Virginia Infantry. With his regiment, under Col. Samuel Garland, he participated in the fight at Blackburn's Ford, battle of Manassas, And Dranesville in 1861. In 1862. under the brigade command of Gen, A, P Hill, the regiment took a prominent part in the battle of Yorktown and Williamsburg. He also shared in the services of his regiment at Seven Pines, the seven day's fighting before Richmond, Georgetown, Second Manassas, and Fredericksburg, and participated in the campaign of Longstreet's Corps in 1862-63 about Suffolk and Newbern, N. C He Also shared in the heroic fighting at Gettysburg. During 1864 be was in the engagements at Drewry's Bluff and Milford Station, and at the latter place was captured He was held for ten months at Point Lookout, and released in March, 1865. Though engaged in many encounters with the enemy, he escaped with but one light wound, received at Seven Pines

Authors note.  The last name of the information given is either the Great-great -grandson or Great-grandson.

Austin, John, born in Virginia, 1736, died near Oldhamburg, Oldham County, Ky., Oct. 5, 1845. He served the entire period of the War in the Regiment of the Virginia Line commanded by General Daniel Morgan, known as Morgan's Sharp-Shooters or Riflemen. Gathright, Owen.

Martin, Joseph, was born in Goochland County, Va., 1740, died in Henry County, Dec. 18, 1808. On Feb. 17, 1779, appointed Major of a battalion of Volunteer MDitia to be used against the Cherokee Indians in Western North Carolina and east Tennessee. Robertson, Archibald Thomas.

Puryear, Jesse, born in Virginia and died in Green County, Ky., 1783 Was a private in the Third Continental Regiment Virginia Infantry and served from early m 1776 constantly and continuously until discharged honorably from further service at Chesterfield Court House on the 22nd day of October, 1780. Puryear, Emmet Vance.

Walker, Seth, born in Portsmouth, N. H., Aug. 29, 1756, died in Derry N. H., Oct. 8, 1838. On hearing of Battle of Bunker Hill, marched with number of others from Portsmouth to Charlestown, and afterwards to Dorchester. Took part in the siege of Boston. Returned to Portsmouth and was stationed at Fort Constitution, New Castle, where he remained some two years, first as sergeant and afterwards Lieutenant of Artillery subsequently was appointed Captain of Marines.  Hartwell, Samuel Adams, 2nd. Hartwell, Samuel Adams, 3rd.

Posted by Dennis Segelquist at 12:17 AM No comments:

p. 118, The Thirty-Fourth was deployed in line of battle during the halt, facing the lines of the enemy. After the rain ceased, the sharpshooters of the enemy began firing occasional shots at our
regimental line. Jesse Berlin, of Company I, was killed, and one man in Company D., was wounded. Berlin was a good target. He wore a red shirt, and had laid his blouse off, making him an easy mark.
Posted by Dennis Segelquist at 3:31 PM No comments: 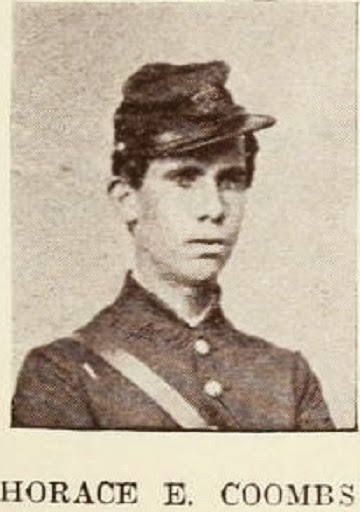