Civil War Confederate Army Officer. After his family moved to Richmond in 1827. he worked as mechantile clerk for his father while being educated. He undertook the study of law and qualified for the bar in 1842, and served as a volunteer for the Richmond Grays in the Mexican War. In 1849 he resumed the practice of law, partnering with George Wythe Randolph and Isaac Watkins. Specializing in commercial law, he built an extensive and successful practice, and was active in the Virginia militia.

He was elected to the Virginia House of Delegates in 1850, and returned to the General Assembly in 1857 as a member of the Senate of Virginia. During the early days of the Civil War he commanded his militia force. In May of 1861 he was commissioned Colonel of his unit when it entered service with the 15th Virginia Infantry. He served under General John B. Magruder at the Battle of Big Bethel, saw action in the Seven Days' Battles and was severely wounded at Malvern Hill. He was assigned to the War Department to assist General Samuel Cooper. He retired from disability in December 1864. Following the war he resumed his practice of law and was elected to the Richmond City Council in 1866. He was removed from the council in 1869 for failure to subscribe to the test oath. He died after contracting typhoid fever and was buried with full Masonic honors.

Cause of death: Typhoid Fever.


From The Official Records of The Confederate Army.

Col. T. P. August, Fifteenth Virginia Regiment, was wounded at the battle of Malvern Hill, July 1, 1862. Before he had reported for duty after that wound he became the subject of a preexisting disease, which was exacerbated by active service, and which incapacitated him for service in the field. He was assigned in January, 1863, as commandant of conscripts for the State of North Carolina. He has been in the conscription service since that date, never having been at any time capable of field duty. His present condition is indicated by the accompanying surgeon's certificate. It has been his condition within my personal knowledge since November, 1863, the date of his assignment to duty in the Bureau at Richmond.

I have regarded him as extremely liable to die at any moment from the effects of the disease which caused his assignment. He is not physically competent to one hour's service at the head of his regiment, and never will be. Colonel August is a lawyer of eminent ability and of high repute in the State of Virginia. He is an officer of distinguished gallantry, shot down at the head of his regiment, leading them in an assault on the breastworks at Malvern Hill The comment on the letter of Colonel August is not deemed a proner subject for remarks by a subordinate officer.

In the duties with which he has been charged in this Bureau he has exhibited a zeal, earnestness, and intelligence which have been of eminent advantage to its operations. With his skill, acquired by two years experience, his great industry, and intelligence, I am confident at this period of our struggle his place could not be fully supplied in the department to which he is allotted that of acting upon applications for agricultural exemptions and details and investigating and reporting on the law and evidence of the thousands of cases submitted to the Bureau.
Posted by Dennis Segelquist at 2:22 PM No comments: 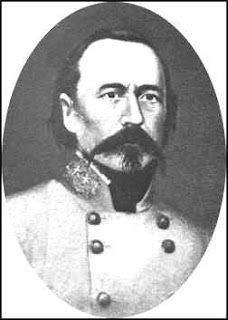 Civil War Confederate Major General. Born in Tennessee, he graduated from West Point in 1840, was commissioned an officer in the US Army Artillery and served in the Seminole War on the frontier, during the Mexican War. With the start of the Civil War, he joined the Confederate Army and was appointed a Colonel in the Tennessee Corps of Artillery on May 17, 1861. Promoted Brigadier General in October 1861, he commanded the 3rd Division, 1st Geographical Division, Department and was promoted Major General of the Army Corps of Tennessee in March, 1862. He led a division in the Corinth Siege, the invasion of Kentucky and fought at Murfreesboro. He then ran into trouble with Confederate Army commander General Bragg, who brought charges against him for disobedience of orders and was court-martialed in March, 1863. For the remainder of the war, he held only minor posts. After the war, he was a teacher and a farmer

Colonel commanding corps of artillery. Provisional Army of Tennessee, May, 1861.

Commands of Colonels Neely and Mark.

Division composed of brigades of Cabell and Churchill, Army of the West.

Division composed of brigades of Ector, Rains and McNair.

Army of the West, divisions of McCown, Little and Maury, June, 1862.

Division in Army of Kentucky under General E. Kirby Smith.

Posted by Dennis Segelquist at 1:41 PM No comments:

James B. Gillett was born in Austin to James Shackelford Gillett and Elizabeth Harper Gillett. He was reared in Lampasas. After a stint working as a cowboy, Gillett joined Company D, Frontier Batallion, of the Texas Rangers in 1875. As a Ranger, Gillett gained fame as an Indian fighter and as a man who could round up cattle thieves and outlaws.

In December of 1881, Gillett resigned from the Texas Rangers and was appointed assistant city marshal of El Paso; in June 1882, he was appointed marshal. El Paso was a tough border town and Gillett was known as a man without fear, despite his age. Arrow straight, he neither cursed nor drank and he claimed that "no man will ever kill me drunk". On April 1, 1885, he left law enforcement and became a cattle manager for the Estado Land and Cattle Company. Six years later, he successfully branched out on his own as a cattleman.