Georgia Fourth Infantry Regimental History.
Lieutenant William W. Hulbert went into the army as first corporal in the West Point Guards, and his promotions were rapid and well deserved. Captured at Spottsylvania while in command of the
sharpshooters of the Fourth Georgia Regiment. He was one of the six hundred Confederate officers who were placed under fire of our batteries on Morris Island, S. C, afterwards transferred to Fort Pulaski, Ga., and paroled December, 1864. He was a gallant Confederate soldier, always ready to face any danger or undergo hardships of any character. Colonel Doles, who was in command of
Ripley's Brigade, speaks in very complimentary terms of Lieutenant

Hulbert's gallantry in action during the seven days' battles around Richmond. There is not a more enthusiastic ex-Confederate in the South, and none that love the Lost Cause more dearly. A reunion
without his presence would loose much of its interest to his many admiring friends, for he is the prince of good fellows. He is now an influential citizen of the city of Atlanta, Ga., and holds the responsible position of division superintendent with the Southern Express Company.


Posted by Dennis Segelquist at 1:25 PM No comments:

Connecticut First Light Artillery Regimental History.
Page 83, Just after reaching the anchorage opposite Beaufort the first death in the Battery occurred.Comrade Henry B. Bullard, of Guilford, who had been sick with typhoid fever for a week, succumbed, and his comrades found him a resting place under some giant yellow pines just outside the city.

It was with heavy hearts that the comrades set about the task of burying their dead brother. Not one but wondered how soon new graves might have to be made, and those who were then engaged in the solemn duty might be the next to be laid under the sod. It was not Comrade Bullard's fortune to fight under the flag of his country, he died of disease, not from an enemy's bullet, but his heroism was the same. He had died for his country.
Death: February 6, 1862 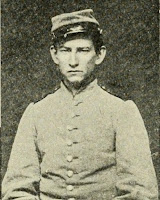 Author: If you have any information on this family I would like to know about.