Illinois Fourth Cavalry, Regimental History.
By Phineas O. Avery, published 1903.
PAGE 55., The advance vedettes, Bob Hume, Hiram Moulton and Myron Hare advanced in the road and overtook a lone rebel and they supposed he would surrender as the others had done, but instead, he whirled and shot Hume near the heart who fell from his horse dead. I did not go with the dismounted men but held the horses. While thus engaged I saw a rebel not very far off in the woods so I gave my halters to another man and went out and took him in. As soon as I came up he begged me not to shoot, saying that we had killed his father and "for God sake don't kill me. " I assured him that I would not shoot if he surrendered.

The other two boys, Moulton, and Hare had killed the rebel that shot Hume, both fired the same instant and both balls took effect. This rebel was the father of the one I took. Boyd Simison and I then went down the road about one-fourth of a mile where Hume's body lay and put it on his horse and brought it back.

Bob Hume had only been enlisted just a week when he was killed. He was station agent at Earlville and had gone down to Cairo to visit the boys and when the regiment left his enthusiasm got the better of him and he enlisted and was the first to fall . He had not been mustered into the United States service consequently, I am told, his widow has been unable to procure a pension.
Posted by Dennis Segelquist at 3:02 PM No comments:

Captain Baker  father, Ira S. Baker, was one of the foremost men of Kehoboth, having held the first offices of the  town for 3^eai-s. He was also a member of the House of Representatives in Boston. After graduating from the public schools of Rehoboth Captain Baker learned the trade of a mason, in which business he was very successful ; notwithstanding, when the war broke out he left his remunerative business in Providence, R. I., and enlisted in Company A, First Rhode Island Detached Militia, for three months.

He served his full term, being engaged with his regiment at the battle of Bull Run, where he received a wound in his arm. Having been discharged and having recovered from his wound, he re-enlisted as first sergeant in Company A, Fourth Rhode Island Infantry, September, 1861, and was promoted to second lieutenant, Nov. 20, 1861. He was with his regiment in the well remembered Burnside Expedition, taking part in the capture of Roanoke Island and the battle of Newbern, and remaining with his regiment until Aug. 11, 1862, when he resigned his commission. The cause of his resignation, together with over half of the commissioned officers of the regiment, was the action of Governor Sprague in taking an officer from another regiment and giving him a place over them as one of the field officers.

Soon after his arrival home I met Lieutenant Baker in Providence and invited him to go with Company H as first lieutenant, it being understood then that the captaincy was settled ; his answer was that he intended to see the war through and was ready for anything that might offer. Lieutenant Baker at that time was twenty-four years old; he was indeed a giant, standing six feet four in his stockings, straight as an arrow, well versed in military tactics.; and, although the youngest of the captains in the Third Regiment, his ability as officer was never questioned, nor had the company any reason to regret its choice of him as their captain.

Resolute by nature, kind in heart, he was a man who did things; always doing his duty regardless of consequences to himself. He exacted from every man of his company a strict and impartial obedience to himself and to all officers with whom they were to render duty. At the battle of Kinston, N. C, as we were formed into line of battle, expecting momentarily to be ordered to the front to take a more active part. Captain Baker made this little speech, "In a few moments we shall be where we shall see more active and more dangerous work, but no matter what we may meet let not a man of you run until I run, but when you see me run then let every man run like he devil." Sufficient to say, no man was seen running.

Authors note.  If you would like to read more about Otis A. Baker take this link.
http://www.findagrave.com/cgi-bin/fg.cgi?page=gr&GSln=baker&GSfn=otis&GSmn=a&GSbyrel=all&GSdyrel=all&GSob=n&GRid=83097277&df=all&
Posted by Dennis Segelquist at 4:44 PM No comments: 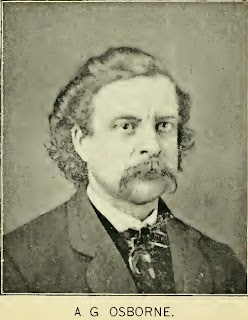 A. G. Osborne was born in Westmoreland county, Pa., in the year 1833, removing to Pittsburgh to learn the tinsmith trade. On the breaking out of the civil war he enlisted in the company known as the "Jackson Independent Blues," and with them entered the three months service, the company being assigned to the 12th Pennsylvania Regiment, in which he served during his term of enlistment. After his discharge he went to Western Virginia and enlisted in Company G, in which his brother was serving, and when the company was transferred to the artillery service, was appointed corporal and gunner of first piece, in which position he served until the end of the company's service. He was married to Miss Kate Hurst, of Buckhannon, West Va., in 1863, to which place he removed after his discharge, and carried on the tin business, afterwards removing to Emporia, Kansas, where he was engaged in business for several years, from which place he removed to Texas, and is at present living in Dallas, in that state
Posted by Dennis Segelquist at 8:55 AM No comments:

William E. Colston was born in Washington, March 24th, 1839, but his early years were spent in Virginia, the home of his ancestors. He came to Baltimore about 1857, an d was among the first to go to Virginia when the war broke out. On June ist, 1861, he enlisted as a private in Company B, Maryland Guard, attached to the 2ist Virginia Infantry, but when the First Maryland Regiment was formed was transferred to Company H, Capt. Wm. H. Murray, June i8th, 1861. In this company he served in all the campaigns and battles of the year, and at the battle of Cross Keys, June 8th, 1862, in Jackson s Valley Campaign he was desperately wounded, being shot through the body. He was permanently injured by this wound and disabled for a long time, but as soon as able to ride he was appointed Volunteer Aid to Major-General Trimble. General Trimble being wounded and left at Gettysburg, Colston then volunteered into Mosby s command, and was killed in the night at tack on Harper s Ferry, January loth, 1864. He is buried in the Confederate lot at Loudoun Park with his old comrades of Company H, First Maryland Infantry.

A Memorial Room to him has been furnished in the Confederate Home at Pikesville, Md., by his brother, Capt. Frederick M. Colston.
Posted by Dennis Segelquist at 3:13 PM No comments:

The funeral of the late John R. Rankin will be held today at Washington D. C., where he died Saturday morning.  The body will be interred in Arlington Cemetery, near Washington.  He was a veteran of the Civil War and for many years engaged in Newspaper work in Green Castle and Indianapolis.  He leaves a widow and three children.  Since 1889, Mr. Rankin had been employed in the Government Printing Department.


Fourth New Hampshire Infantry.
Joseph M. Clough served as first lieutenant in the First New Hampshire Regiment and three years in the Fourth, and was honorably discharged. He assisted in raising the Eighteenth New Hampshire Volunteers, and was commissioned lieutenant-colonel, and at the end of the war was brevet brigadier-general.
Posted by Dennis Segelquist at 3:22 PM No comments:

Matthias Lavillette was born April 15, 1843, at Carleton, Bonaventure county, Province of Quebec. He was the youngest of a family of eight boys and two girls, and is of  French descent. He was brought up on a farm till he was seventeen years old, when he went to sea, sailing on the Atlantic two years. In 1862 he came Wisconsin, and worked two winters in the lumber woods on the Menominee river.

When the boys of the 12th came home on veteran furlough, in the spring of '64, he concluded to enlist and join the regiment. Accordingly, he entered the United States service on the 10th day of May, being mustered in at Green Bay. He went to Madison from there, and was sent at once to the regiment, which he found at Huntsville, Ala. From there he served with the rest of us through the Atlantic campaign, on the march to the sea, up through the Carolinas, through the Grand Review at Washington, and then on to Louisville, where he was mustered out with the rest of us, July 16, '64, after which he returned with the regiment to Madison. He says, being six feet three inches in height, he had no chance to forage after chickens and things, the Captain desiring always to keep him close by to hide behind in case of serious danger.

Mr. Lavillette went, the winter after the war, to work again in the woods on the Menominee. In the spring of 1867, he went back to his old home to visit his parents. During the following summer he became a sailor on an English vessel bound from Boston to the Islands of Hayti. After sailing two years on the Atlantic, he came again to the Western States, and became a sailor on the Great Lakes till 1873, when he joined the fire department in Chicago. During his sailing on the lakes he had some rough experience in storm}' weather, more than once coming near losing his life.

Once while in the fire service in Chicago he brought two women down a fire escape, thus barely saving their lives and at great danger to himself.

Mr. Lavillette is the champion checker player of Lower Canada, or Quebec, also of both North and South Dakota. His present home is at Hecla, Brown county, South Dakota, where he went to take up a soldiers' claim on the prairies after resigning his position in the Chicago fire department
Posted by Dennis Segelquist at 9:59 AM No comments: