He was a Sales man.

Occasionally there were places where something good would open up. Soon after our return to Loudon, Sergt. Leeds of Co. C cast a wistful eye across the Tennessee, when a flock of sheep ran across his sight, upon which he said to " Uncle Ben ": " I wish we had some of that mutton over there." " I wish we had, too," came the answer. The times were such that nothing more needed to be said: no permission granted, no prohibition ordered — though there were standing orders against foraging except under direction of the quartermaster. The sergeant at once understood the words well enough to pick up a squad and "go for 'em." He had no difficulty in finding a boat, which, with a little repairing (soldiers always have a way of doing such things) bore them right speedily to the other shore. Landing by a farm house they stopped to get something to eat, and found a smoke house well filled with hams, shoulders and the like, to which they helped themselves and loaded their bayonets with all they could carry. In this way the mutual wishes of " Uncle Ben " and themselves were fully satisfied for the time being.
Posted by Dennis Segelquist at 2:00 AM No comments:

Children: May B. Cree.

Alfred was living in Iowa City by 1860, working as a carpenter and cabinet maker. He married Martha Smith there that year. After the War, he was active in the 22nd Iowa's regimental association, and with "Old Settlers" events in Johnson County.

Captain A. B. Cree, of Civil War fame, addressed the boys in this last assembly before moving forward to the depot. He said here: "True bravery is not recklessness. Appreciate danger, do not rush into it with foolhardiness, but be prepared to meet it when duty calls. Moral character makes truly brave men, and as I look into your earnest young faces I see that nobility of character written there. I know that you will be brave and do your duty in a manner worthy the great state of Iowa, as the good, noble fathers of some of you did theirs, when in my command a generation ago. May you return to us unharmed." 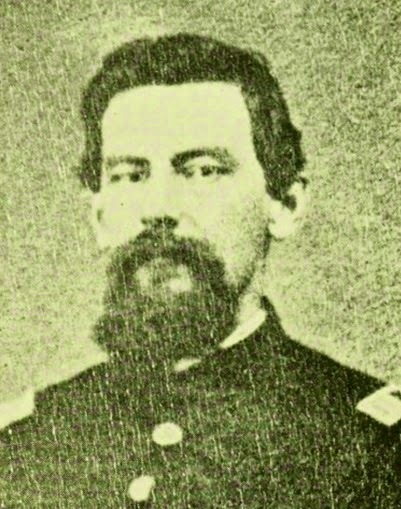 CAPT. ALFRED B. CREE, a resident of Iowa City, was born February 22, 1831, in Perry county, Pennsylvania. He is a cabinet-maker by trade. He came to Iowa in 1855, and settled in Iowa City in 1856. He enlisted August 7, 1862, and was commissioned captain of Company F, Twenty-second Regiment Iowa Volunteer Infantry, August 10, 1862. He was wounded in the right shoulder September 19, 1864, at Winchester, Virginia, and wounded in the right leg severely, October 19, 1864, at Cedar Creek, Virginia. He was mustered out of the service July 25, 1865, at Savannah, Georgia, and returned to Iowa City, and entered the store of Mr. Nixon, and remained there until 1881, when he became a member of the firm of Hohenschub, Cree & Lee, furniture dealers and undertakers. He was elected trustee of first ward March, 1869; again, in March, 1875, and again in March, 1877, and was chief of the fire department four years. He was elected vice-president of the State Fire men's Association in 1880, and re-elected in 1881. He was married September 5, 1860, to Miss Hattie Smith of Iowa City. He is a democrat in politics, and takes a lively interest in the interests of his party.
Posted by Dennis Segelquist at 1:38 AM No comments:

The medical and surgical history of the war of the rebellion.

Push to enlarge.
Posted by Dennis Segelquist at 1:59 AM No comments:

General John L. Swift was born of good stock. He had patriotic blood, and lived many years in Boston. He was appointed United States Storekeeper at Boston Custom House in 1861, but resigned in 1862, to enter the army.

His military career began early during the civil war. Of a patriotic temperament, he volunteered as a private,in 1862, in Captain King s company, Thirty-fifth Regiment, Massachusetts Volunteers, Six weeks later, he was made a Sergeant. The regiment was ordered to Antietam, and, just as the train was leaving the station, Sergeant Swift was ordered by Governor Andrew to return to Roxbury, and raise a company of volunteers. This he did in ten days. He was now commissioned as Captain of this Roxbury company, which became Company C, the color company of the Forty-first Massachusetts Volunteers. The sergeant, who took Swift s place was killed at Antietam, five minutes after the battle opened.

Swift drilled his company at Lynnfield, and Boxford,having as his First Lieutenant, W. T. Hodges, of Roxbury, and Otis, of same city, as Second Lieutenant. He went South with his regiment to New Orleans, and, at Baton Rouge, was made Provost Judge. He was present at the Battle of Irish Bend, on General Grover s staff,and during the siege of Port Hudson, he was one of the" Forlorn Hope" who volunteered to storm the works of the enemy in response to the call of General Banks.He remained on the staff of General Grover as Captain and Judge Advocate until 1864. He also served on the staff of the first Governor of Louisiana, Michael Hahn,after the reconstruction of the State.

General Swift was honorably discharged from the army,in order to accept a position as Adjutant-General of Louisiana, which position he held until 1865, when he resigned.

Returning North, he re-entered the service of the United States Government at the Boston Custom House,where he was an efficient official for many years. He was in great demand as a lecturer and orator, and stumped the State during many political campaigns.He was an ardent Republican, a true patriot, a friend of education, reform and religion, and died respected by all who knew him.
Posted by Dennis Segelquist at 3:17 PM No comments: