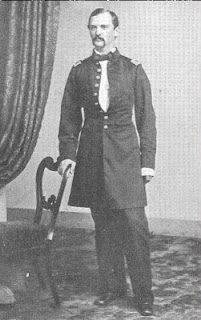 Civil War Union Army Officer. Served as 1st Lieutenant and commander of Battery D, 5th United States Regular Artillery during the Battle of Gettysburg. On July 2, 1863, Little Round Top on the extreme left flank of the Union line was in danger of falling into Confederate hands. He and his men dragged their cannons up the hill through boulders and trees by hand and opened fire immediately upon arrival. Moments after arriving at the top of the hill Lieutenant Hazlett was killed. Today a monument stands where he fell.

From the Official Records.

Lieut. Charles E. Hazlett, Fifth U. S. Artillery. Distinguished at Bull Run, Yorktown, Hanover Court-House, Gaines' Mill, Malvern Bull Run No. 2, Antietam, Fredericksburg, Chancellorsville, and Gettysburg. While stopping by the side of General Weed, to receive his last wishes, a bullet struck the lieutenant in the head and killed him almost instantly (July 2, 1863). This young officer, for his grade, had no superior in the army.
Posted by Dennis Segelquist at 1:33 AM No comments:

Push picture to enlarge.
Posted by Dennis Segelquist at 8:08 PM No comments: 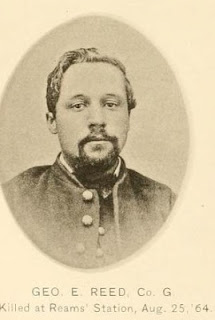 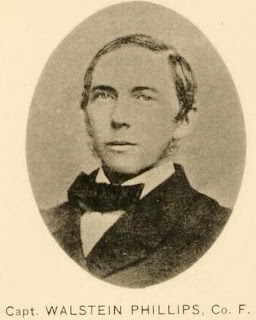 Notes from the third Pennsylvania Cavalry.

On September 16, Private John Flinn, of Company L, was killed at Magruder's Ford, Maryland, while on duty with a detail of his company.

The first volunteer cavalryman killed in defense of the Union cause in Virginia was Private Peter Brennan, of Company B, Third Pennsylvania Cavalry. He was killed at Munson's Hill, Aug. 26, 1861. Had he survived the vicissitudes of war, he would have been mustered out with his company, Aug. 26, 1864.

Weather moderate, alternately clear and cloudy; grounds continue muddy. Dress parade at 8 a. m., after which guard was mounted. Captain Gary, Officer of the Day, and Lieutenant Rogers, Officer of the Guard. Company E was dispatched at an early hour, a. m., for scouting duty. About 10 o'clock in the morning Private William Ewing, of Company H, was instantly killed by the accidental discharge of a pistol in the hands of * * * , an intimate friend and a comrade of the deceased. The ball entered the left temple of the unfortunate man and passed completely through the head.

Our camps on the Peninsula were many, and frequently changed, but they were always near the front. We remained longer in Camp Lincoln, at Savage's Station, than in any other. This we hastily left during the flank movement toward the James River. While we lay in camp there, Dennis Kelley, of Company M, was killed by the accidental discharge of his carbine.

Early in the fight Lieutenant Ellwood Davis, of Company H, was instantly killed by a splinter of a shell striking him under the left eye.  Lieutenant Elwood Davis was an exceedingly tall, slender, handsome lad, but eighteen years of age, though he looked somewhat older. Belonging to a wealthy family, he unselfishly left a home of every luxurious comfort to serve his country. His career in the regiment was a short and unfortunate one. He joined and was mustered into service May 16, 1863. On the terribly trying march from the Rappahannock to Gettysburg he was stricken down with fever, and was sent on June 26 to Alexandria, and thence home. After being carefully nursed through a long and severe illness he rejoined the regiment on September 27, at camp on Kettle Run, near Bristow Station, and was killed eighteen days later. Brave to a fault, enthusiastic about military life, showing every promise that he would prove an exceptionally fine officer, a perfect gentleman, he was held in high esteem by his fellow officers and the men of his regiment, short as was his career among them.

The weather continued exceedingly warm. We remained all of the 9th in the place where we had bivouacked, the army taking a rest. There was more or less fighting during the day, and the
skirmishers and sharpshooters were at times, and in some places, busy. A sad disaster to our army occurred in the death of General John Sedgwick "Uncle John," as his men fondly called him. During the morning he was riding along his line, speaking words of cheer and encouragement to his men. While joking with some of them about dodging bullets, he was shot under the left eye by a sharpshooter, and killed instantly His death caused great sadness through the army, in which he was much beloved and highly esteemed, for he was one of our best corps commanders. His body was sent North with an escort of five men from our regiment.
General Sedgwick was of the sixth Corps.


Posted by Dennis Segelquist at 12:42 PM No comments: