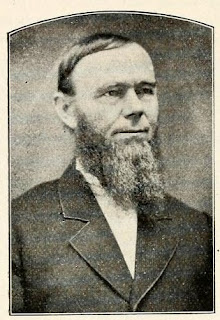 Born June 3, 1835, in Hamburg, Germany. Came to this country in 1851, and worked on a farm. When the' war broke out he enlisted in the 99th, where he served faithfully for three years. He returned home and clerked in a store for three years. October 29, 1868, he was united with Miss Belle Harris in marriage; to them were born six children, three girls and three boys. After marriage he entered into the mercantile business for himself and continued until his death which occurred at Wanatah, LaPorte county, Indi- ana, March 25, 1891. He was baptized and united with the Christian church in December, 1886; was faithful and a good christian man while he lived. His wife and family still reside at Wanatah, Indiana, and sent the picture which appears in this volume as a token of the respect and honor with which they cherish his memory.
Posted by Dennis Segelquist at 6:53 PM No comments: 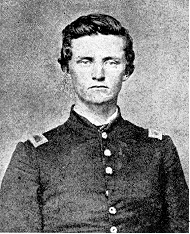 ALLEN GENTRY Was born in Spencer county, Ind., March 3, 1842, and entered the United States service with the organization of the 42d Regt. Indiana Vol. Iufty. at the age of nineteen years as corporal of Company H of the regiment, and color bearer for the regiment. Prom corporal he was promoted in the regular line till he reached the rank of lieutenant, in which he was mustered out with the regiment. He held a commission as an officer before he was twenty years old, being the youngest officer in the regime . He is a prosperous farmer now, with a residence near Bockport, Ind., enjoying the confidence and respect of all.
Posted by Dennis Segelquist at 1:02 AM No comments: