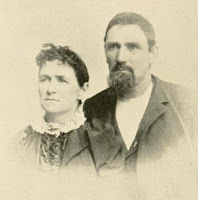 John W. Huffman, was born in Dearborn County, Indiana, February 24, 1844. he was removed with his parents to Ripley County Indiana, when sixteen years of age.  His boyhood was spent on a farm with the usual district school education.  Enlisted as a private in Company B., Sixty-Eighth, August 1862; was appointed to sixth Corporal; promoted to be Sergeant, and on October 1, 1864, was promoted to First Lieutenant of his company, for gallant conduct in action at Dalton, Georgia, where he grasped the colors of his regiment from the hands of the fallen color bearer, and led the line in the face of the enemy.

His father and two brothers were in the military service in the war of the rebellion, the father dying in Andersonville prison, and one brother falling at Fredericksburg.  Lieutenant Huffman was mustered out with his regiment on June 20, 1865.

He was married to Miss Martha Shackelford, October 29, 1865, three children, two sons and a daughter, blessed their union, all of whom survive.  His wife Martha, was the daughter of Erastus Shackelford, who was born in Brown County, Ohio, March 6, 1815; was married to Miss Mary Stewart, September 1, 1836, which union was blessed by eight children, four sons and four daughters, all living.  Enlisted in Company F., Sixty-Eighth Indiana Volunteers Infantry, at the age of Forty-Seven years.  Returning home at his discharge.  He removed to Boncturant, Polk County, Iowa, where he ied November 15, 1894, at the ripe old age.  His wife preceded him to the life beyond the grave.

Lieutenant Huffman, removed to Polk County, Iowa, in 1870, where he engaged in Agricultural pursuits, his favorite occupation.  His farm was highly improved, its fertile acres, handsome shrubbery , and stately groves making it one of the finest in the state.  An ideal home for the gallant soldier and patriot, and his charming wife and loving children.  On the 27th, day of May, 1897, surrounded by his devoted family, he crossed the "Silent River."  Was laid to rest in Santiago Cemetery on decoration day.
Posted by Dennis Segelquist at 4:46 PM No comments: 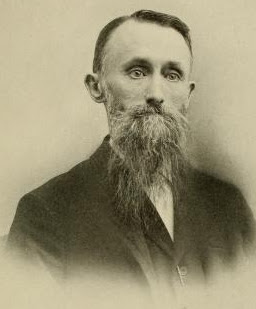 Joseph W. Garrison, was born January 18, 1838, and died on December 31, 1908, served three years in Company H., Thirty-Seventh Indiana Volunteer Infantry.  Battles: Stone's River, Murfreesboao, Chickamauga, Peachtree Creek, Chattanooga, Lookout Mountain, Missionary Ridge, Kenesaw Mountain, and Picket Hill.  He was also engaged in the Atlanta campanign and in many minor engagements.  Becoming sick in the latter part of the war, he was assigned to the commissary Department and was connected till he was mustered out of service.
On February 16, 1865 he married Martha E. Tanner.
Civil War.
Record Series: Military Records
Collection: Civil War
County: Statewide

John Powers, was doubtles the most popular sheriff the county ever had. He was serving his twelfth year in that capacity when he was fatally wounded on the night of February 5, 1902, in a battle with bank robbers. He was sleeping in an apartment above the bank of Clarksville, when a wakened by the explosion of the vault in the bank below. He hastened down stairs and encounnter four desperadoes. He engaged them in a rapid firing encounted of severalminutes, before the fatal shot entered his breast, within an hour he was dead.

One of the robbers, whose name was alleged to have been John Dunn, was also severly wounded, but was able to get a way. It was because of this wound that he was found later in a hospital in Wichita Kansas. However he escaped from the hospital. "Smiling Joe," Clark who proved to be a hireling of the leaders, was sent to the penitentiary for life, from which place he absconded a few months later.

The other two who give their names as Fred Underwood and George Durham, were finlly hanged from a hidden scaffod in the Johnson county, court yard on June 19, 1905.

Johnson County Arkansas.
Battle of Oak Hill on Wilson's Creek.
On August 10, 1861, the first battle of consequence west of the Mississippi river, was fought.  The conflict doubtless brought more casulties to the population of  Johnson County then any other battle during the four year turmoil. The six hours through which the fighting was in progress spread a terrible depression and anxiety over all the county while loved ones awaited authentic reports from the battle field which, when received caused great sorrow among the people.  Some who were killed outright and wounded were;
Joel Towel.
Robert James.
Joel Smith.
Thomas King.
Vincent Blackard.
Lew Slate.
Thomas Spears
Those Wounded.
J. N. Brown.
Robert Manley.
J. E. Cravens
John Harn.
Alee Rose.
Hall McConnell.
Abe Lensey.
John Grace.
J. L. Farmer.
Jap Newton.
John Morgan.
Posted by Dennis Segelquist at 3:33 PM No comments: 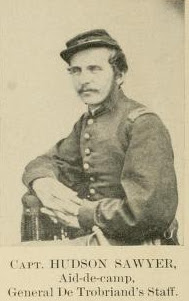 Hudson Sawyer, 21, years, Levant, Mustered in July 28, 1863.  Promoted Sergeant January 14, 1864.  First Lieutenant July 27, 1864. Wounded June 18, 1864, wounded in right side.  Promoted Captain Company I., April 25, 1865, and transferred.
Captain Hudson, Levant, joined by transferred from Company I., April 25, 1865; Aid on Brigade staff, from Fall of 1864 to June, 1865; Breveted Major; Mustered out September 11, 1865.  He is now serving as Post Chaplain at Togus Me.
Hudson Sawyer, then on Gen. De Trobriand's staff, was riding over the field with orders to some of the regiments.  His horse stumbled as he leaped a line of  breastwork, both being thrown to the ground.  The Captain, although he would hardly own that he was hurt at the time, suffered for months from the effects of the fall.
Posted by Dennis Segelquist at 10:54 AM No comments: 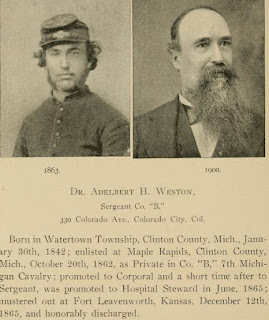 Push on picture to read better. 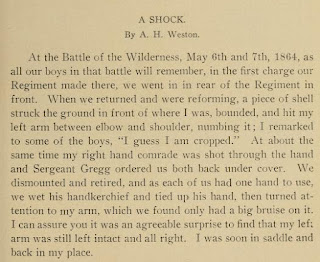 Posted by Dennis Segelquist at 6:52 PM No comments: 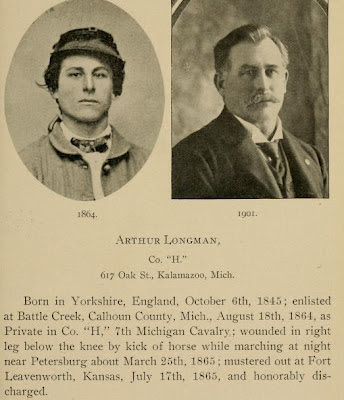 Note. Push any picture to read it better 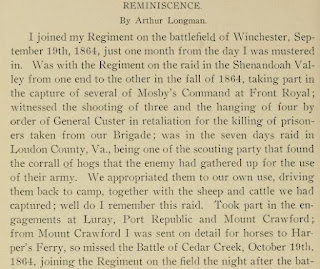 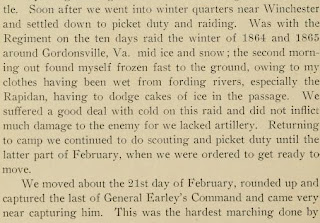 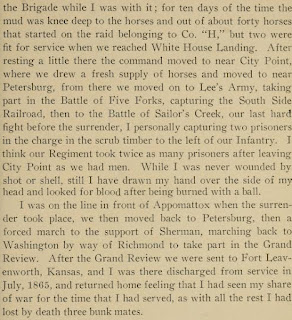 Posted by Dennis Segelquist at 4:11 PM No comments: 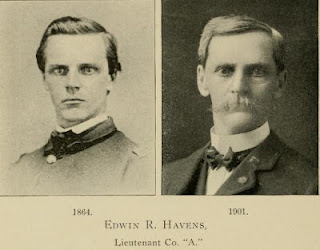