Authors note.  To see a picture of him and to learn more about him and his family take this link.
http://www.findagrave.com/cgi-bin/fg.cgi?page=gr&GSln=davidson&GSmn=h&GSbyrel=all&GSdyrel=all&GSst=14&GScntry=4&GSob=n&GRid=66052545&df=all&

Posted by Dennis Segelquist at 11:13 PM No comments:

John A. Cole, Private, Iowa,  25th., infantry, Co. H., Age 23, years, was wounded at Arkansas Post, January 11, 1863, and was conveyed on the hospital transport Louisville to the Adams hospital at Memphis.  He was later transferred to Lawson hospital, St. Louis, April 17, 1863, and on June 9, was sent to Keokuk, and was discharged from the service.  Pension records shows that he died January 30, 1865.
Posted by Dennis Segelquist at 1:34 AM No comments: 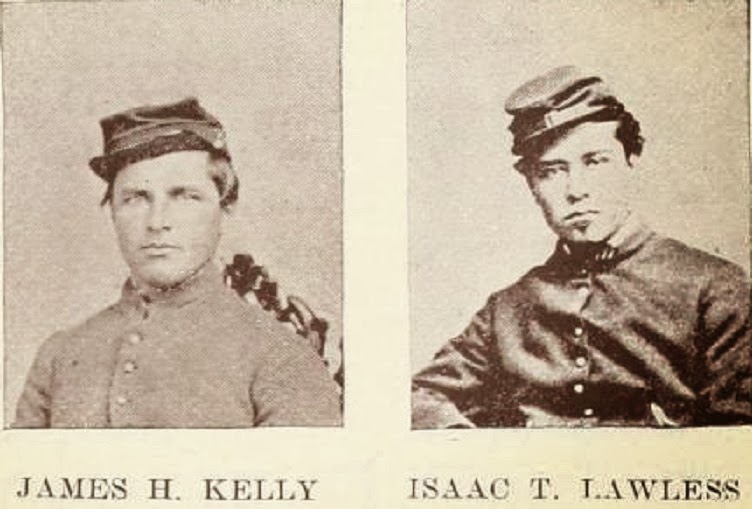 Push to enlarge.
Previous to the engagement at this place, which occurred June 17, 1862, the infantry under Col. Fitch had been landed on the west bank of the river, which was covered with woods, the transports at the same time taking position on the east side.

The gunboats then proceeded up the river to begin the attack, the Mound City being in advance. Lieut. Caldwell was stationed with the transports, Lieut. Gray accompanied the infantry, and the writer took his station on the Mound City. As soon as the latter came within range 'the rebels opened on her from the heavy guns on the bluff, which were well concealed by the intervening trees and shrubbery, the Mound City replying with her bow guns as soon as she could see the smoke from the enerny's guns. In rounding a slight bend of the river the Mound City was struck by a solid shot on the port side near the bow where there was no iron armor, which, after piercing her side and killing two or three men, penetrated the boilers, causing the steam to escape and scalding nearly the whole crew. Many jumped out of the port-holes into the river to avoid the steam, some being drowned and others shot, while a few succeeded in reaching the shore or were picked up by the small boats from the other gunboats.

Some of the rebels came down to the brink of the river to fire at our men swimming in the waterr, while their batteries continued to pour in grape and canister. Col. Fitch now requested the gunboats to cease firing, while he assaulted the rebel works from the rear with his infantry. He took them by surprise, capturing nine guns and thirty prisoners, including Col. Frye, the commanding officer.  while some of our men were swimming in the water a very gallant act was performed by a little tugboat accompanying the expedition, carrying a small brass howitzer, with a crew of only two men. She rushed to the rescue while the Mound City was drifting helplessly down stream, and at short range fired two or three charges of canister into the rebels along the bank.

Of a crew consisting of one hundred and eighty men on the Mound City hardly thirty escaped death, many of the scalded lingering one or two days in great agony. The Signal Corps lost an excellent man in this fight in the person of Isaac Lawless, who was so badly scalded that he died soon after on the gunboat Conestoga on his way to the hospital at Memphis. He was wrapped in his blanket by his comrade J. H. Kelly, and laid to rest with twenty-six of the crew of the Mound City on the east bank of the Mississippi river, a little above Island No. 68.


New York State Records.
JAMES H. KELLY, was not found on the roster

Company: H., Henry Spurr Tafft was also known as Henry S. Taft in some records. His military records are under "TAFFT", as is his burial and his pre-war records in MA.

On 1 Aug. 1861 Henry mustered into service with the 15th Massachusetts Volunteer Infantry as a 1st Lieutenant, being credited to the quota of Northbridge, Worcester County, Massachusetts. He was 27 years, 4 months and 19 days old.

On 14 Aug. 1861 at "The Worcester Spy", Worcester, Worcester County, Massachusetts, Henry Spurr Tafft was mentioned in an article about the departure of the Fifteenth Massachusetts from Worcester. In Sept. 1861 Henry was transferred from detached to the Signal Corps.
Posted by Dennis Segelquist at 3:09 PM No comments:


Medical and Surgical History of the War Of the Rebellion.
Wounding of Sergeant Louis Morell or Morrell. 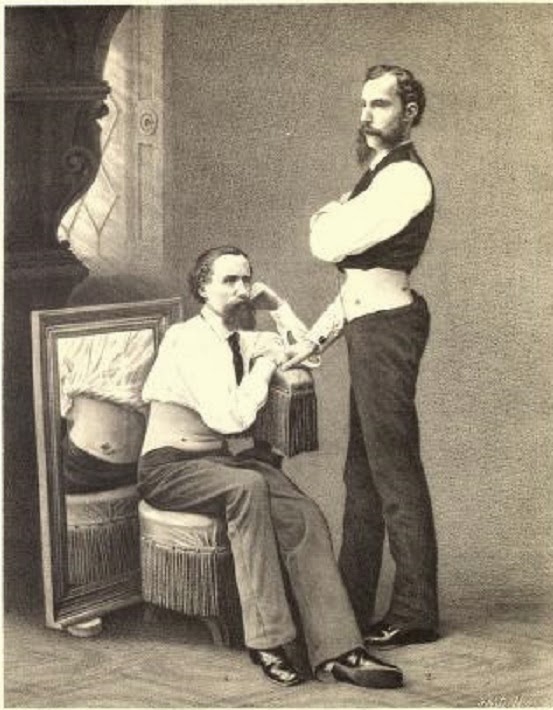 CASE 243. Sergeant Louis Morell, Co. D, 119th New York, aged 19 years, on the afternoon of July 1, 1863, in the assault on the lines of the Eleventh Corps, received two wounds, and, falling, and remaining on the field between two fires, a third wound. The first wound was from a small ball, which lodged in the globe of the left eye; the second was inflicted an instant afterward by a musket-ball, which entered four inches to the right of the umbilicus, passed directly through the body, and emerged near the right sacroiliac synchondrosis, having grooved the crest of the innominatum. The sergeant was then in the act of reloading, the right arm elevated to use the ramrod. He recollected seeing his cartridge-box torn by the missile, and the next instant fell unconscious. He dimly recalls a temporary return of consciousness, on being struck soon afterward in the left thigh, by a musket-ball, which passed through the quadriceps extensor, a little above the patella. He remained on the field
until the morning of July 4th, without suffering from hunger or thirst.

Authors note.  After his recovery he was discharged from the service on August 18, 1864.  His  disabilities were, shots through the abdomen, left thigh and the loss of the left eye.  He was paid a pension.  He re-enlisted into the service on May 11, 1867, as a hospital steward and assigned to duty at Division of Surgical Records of the Surgeon General Office.

Take note of the picture of Sergeant Morell sitting in the chair.  It shows were the ball entered his abdomen and came out the back.

Posted by Dennis Segelquist at 2:35 PM No comments:

Page 176, George H. Bowes of company F., was shot through the stomach, from which wound he almost miraculously recovered ; wounded at Middletown, Maryland.


Private George H. Bowes, 8th Illinois Cavalry, in a skirmish, September 13, 1862, was shot in the abdomen.

Captain J. D. Ludlam. 8th Illinois Cavalry, certifies that this man " was shot in a cavalry skirmish, by the enemy, near Middletown, Maryland, and left on the field. I afterward sent an ambulance and brought him in. I did not think he would live through the night. I saw him when shot ; and I was commanding the squadron."

Surgeon C. Hard, 8th Illinois Cavalry, does not refer to the case on his monthly report. As most of the wounded of the battles of South Mountain and Antietam were taken to Frederick the search for the patient was directed there, and it was found that Assistant Surgeon H. A. DuBois, in charge of Hospital No. 4, records, that Bowes entered that hospital on September 19th, with a shot wound believed to involve the intestines. The particulars of the progress and treatment of the case are not recorded. On January 5, 1863, the patient was transferred to the hospital at Camp B, Frederick, where Assistant Surgeon T. G. MacKenzie recorded the case without any details.

On March 9th, the patient was transferred to Jarvis Hospital, Baltimore, and came under the charge of Assistant Surgeon D. C. Peters, in whose language a more detailed history may be given :

"George H. Bowes, aged 19. a private in the 8th Illinois Cavalry, was transferred from Frederick, Maryland, to this hospital, March 7, 1863.

The patient states that the day previous to the battle of South Mountain his regiment was in the advance, skirmishing with the enemy, when he became engaged in a hand to hand encounter with a rebel horseman. The man fired several shots at him with his revolver, one of which took effect in his abdomen.

Private Bowes was discharged from hospital and from the military service April 2, 1863. His pension claim was admitted November 21, 1863, on his captain s certificate, already quoted, and a certificate of disability by Dr. Peters, which was substantially an extract from the foregoing report. The disability was rated as total. No further particulars are given by any pension examining surgeon. The pensioner was last paid in September, 1872, his condition being described as unchanged.


Posted by Dennis Segelquist at 2:50 PM No comments:

This is the medical History of Christopher C. Frayer, but its not so much about his wound that interest me, it was the adventures he must have had to take to get too the medical care he needed, I bet his story would have made a good movie or book.


Medical and Surgical history of the War of the Rebellion.
CASE A 1 -. Private Christopher C. Frayser, Co. C, 1st Dragoons, aged 22 years, was wounded, May W, 1856, at the Big Bend of Rogue River, in Oregon, in a fight with Indians. Dr. C. II. Crane, U. S. A., reported : " He was struck, at short range, by a large round rifle hall of the so-called Harper s Ferry make. The head of the humerus was fractured, two or three pieces were detached, and the upper part of the shaft of the hone was broken in fragments. It was at first supposed that it would be necessary to amputate at the shoulder joint. But, owing to peculiar circumstances the detachment being surrounded by a large number of Indians, and under fire for thirty hours; and as, furthermore, there was but little hemorrhage, and but alight constitutional disturbance, nothing more was done than to remove all loose fragments of bone, pieces of clothing, and other foreign bodies, and to keep cold-water applications to the wound.

This man continued to do well, and was transported, with other wounded men, by me, in a canoe, for a distance of fifty miles, on a river in which obstructions and rapids were numerous, and he had a rough transit He was then transported over more than fifty miles of precipitous mountain paths, on mule-back, and, three weeks after the reception of the wound, he was placed, in good condition, in the post hospital at Fort Orford, Oregon. I saw him some months subsequently, at Fort Vancouver, Washington Territory, and his wound was nearly healed.

He told me that a number of small pieces of bone had come away during the first two months ; and that then the wound had healed. He had some use of his arm when I saw him. I afterward heard that he made a good recovery, and had an excellent use of his arm." Surgeon C. II. Laub, U. S. A., reported, from Fort Vancouver, that this soldier was discharged February 9. 1857. The records of the Pension Office show that he went to his home in Fayetteville, North Carolina, and received his pension. The loss of the records of the Southern pension agencies, after the outbreak of the war, precludes the possibility of tracing the progress of the case. Dr. B. W. Robinson, of Fayetteville, wrote, in 1874, that the man had left that place.
Posted by Dennis Segelquist at 3:14 PM No comments: