I was going to list all the people living in Oakland, Kansas, in 1890 but there were just to many.  So I picked two streets.  I Picked Oakland Ave., and Kellam Ave. One I lived on the other my Grandparents lived on.


These names are in alphabetical order.

Posted by Dennis Segelquist at 3:37 PM No comments:


There will be no  personal information just military.  I couldn't find when he came to Kansas, nor could I learn when left.  But he was living in Topeka 1n 1881.  He is buried in  Colorado. 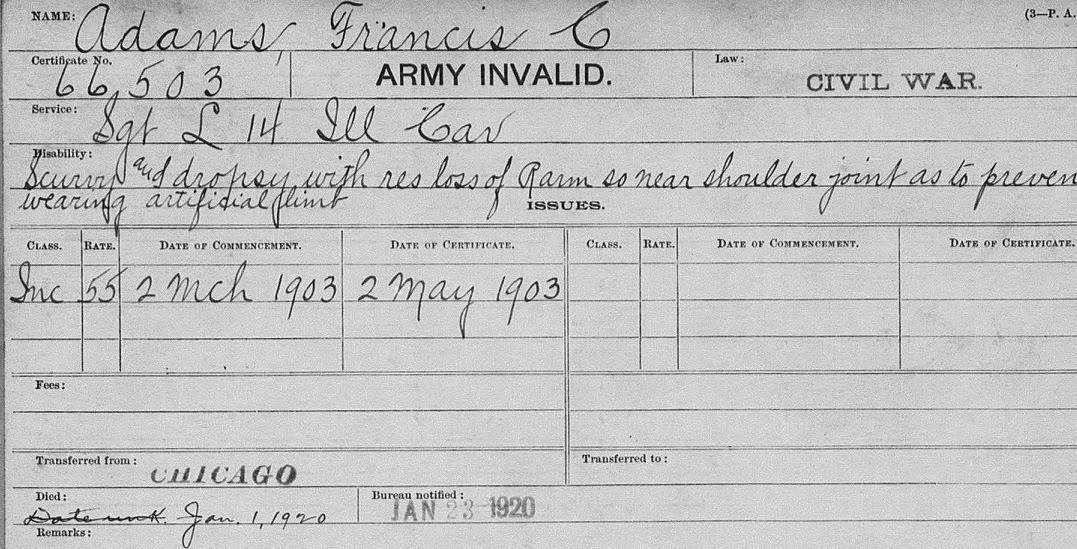 This file card tells of his wounds.
Posted by Dennis Segelquist at 11:55 AM No comments:

THOMAS WHITE STEPHENS, farmer, Section 30, P. O. North Topeka, was born in Wayne County, Ind., August 27, 1839, living there and in Carroll and Pulaski counties until July, 1861, when he enlisted in Company K, Twentieth Indiana Infantry, serving until August, 1864, when he was discharged.

He was in the Army of the Potomac, taking part in McClellan's different campaigns, as well as those of other commanders; was at Fair Oaks, Fredericksburg, Gettysburg, Wilderness and Petersburg battles, and others; was taken prisoner at Orchards, Virginia being held five weeks and spending a portion of the time in Libby Prison and Belle Isle.

He was four times slightly wounded, being protected from serious wounds by his cartridge box and knapsack, once by a book inside his clothing, a Bible taken from Chancellorville battle field, once wounded by a Confederate soldier, Alexander Weant, and another time a ball struck his gun and shattered it. After his discharge he returned to Pulaski County, Ind., there marrying on August 27, 1864, Miss Mary E. Tyler.

They have seven children - Thomas E., Caroline E., James A., George A., John F., Frank F. and Harrison E. In 1877 he came to Kansas, locating in Shawnee County. His farm consists of eighty acres, of which fifty are under cultivation and the rest grass land. He also keeps a small herd of cattle of good grades. He is a member of the Methodist Episcopal Church

Posted by Dennis Segelquist at 3:22 PM No comments:

Author. He lived in North Topeka, Kansas, from 1880-1882. after that I lost all track of him.  While in Topeka his occupation was that of a Carpenter, Contractor and Builder, From what little records I could find, it looks like he may have died in a Soldiers Home in California.


Posted by Dennis Segelquist at 11:33 PM No comments: