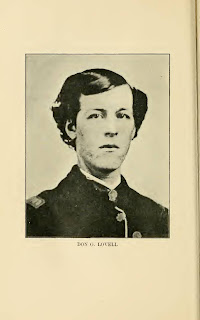 Birth: 1841
Michigan, USA
Death: Oct. 25, 1907
Tacoma
Pierce County
Washington, USA
New York Times, October 27, 1907.
MAJOR DON G. LOVELL DEAD.
Past Commander of Department of Washington G. A. R.
TACOMA, Washington, Oct. 26.--Major Don G. Lovell dropped dead from heart disease last night while attending a board meeting at the First Church of Christ, Scientist. He was Past Commander of the Department of Washington and Alaska, G. A. R., and a prominent member of the Loyal Legion. Major Lovell was 66 years old.
Don G. Lovell was born at Iona, Mich., in 1841. He received a common school education and went to work as a clerk in a dry goods house. At the outbreak of the civil war he enlisted as a private in the Third Michigan Regiment. He served until 1862, when he received the commission of Second Lieutenant and was transferred to the Sixth Michigan Cavalry. He was badly wounded several times, and at the battle of Fair Oaks he received a bullet which he carried at the time of his death.
Lovell was mustered out of active service in 1865 with the rank of Major. He went to Colorado and later to what was then Washington Territory, settling at Tacoma. He aided in organizing Custer Post, G. A. R. He also filled the position of Deputy United States Marshall.
Name: Don George Lovell, Residence: Grand Rapids, Michigan, Age at Enlistment: 24, Enlistment Date: 6 Oct 1861. Rank at enlistment: Corporal State Served: Michigan, Was Wounded?: Yes, Survived the War?: Yes, Service Record: Enlisted in Company A, Michigan 3rd Infantry Regiment on 10 Jun 1861. Promoted to Full Corporal. Promoted to Full 2nd Lieutenant on 13 Oct 1862. Commissioned an officer in Company F, Michigan 6th Cavalry Regiment on 13 Oct 1862. Promoted to Full Captain on 22 Oct 1863.  Promoted to Full 1st Lieutenant on 09 May 1863. Promoted to Full Major on 21 Jun 1865. Mustered out on 24 Nov 1865. Birth Date: abt 1837 Sources: Record of Service of Michigan Volunteers 1861-65, Union Blue: History of MOLLUS U.S. Civil War Soldier Records and Profiles
Name: Don G. Lovell, Death Date: 25 Oct 1907, Death Place: Tacoma, Pierce, Washington. Age at Death: 66 years 1 month 13 days. Estimated Birth Year: 1841. Father's Name: George Lovell,; volume/Page/Certificate Number: CN 272. Collection: Washington Death Certificates, 1907-1960.
Burial: Tacoma Cemetery, Tacoma, Pierce County, Washington.
The following was taken from a book by J. H. Kidd, called; Personal Recollections of a Cavalryman.
In troop "F", commanded by Captain William Hyser, was Second Lieutenant Don G. Lovell, one of the three
veteran officers. He went out as corporal in the Third Michigan infantry, was wounded at Fair Oaks, and again at Trevillian Station while serving in the cavalry. He was one of the bravest of the brave.
Captain Don G. Lovell, of the Sixth Michigan, the senior officer present with the regiment, greatly distinguished himself in the difficult duty of  guarding the rear, meeting emergencies as they arose with the characteristic courage and coolness which distinguished him on all occasions on the field of battle.
CAPTAIN LOVELL'S DISCOVERY.
Captain Don G. Lovell, who was riding by the side of the commanding officer of the regiment,* suddenly cried out : "Major, there is a mounted man in the edge of the woods yonder," at the same time pointing to a place directly in front and about 200 yards beyond the fence.
Captain Lovell was one of the most dashing and intrepid officers in the brigade. He was always cool and never carried away with excitement under any circumstances. It is perhaps doubtful whether he could have
maintained his customary imperturbability, if he had realized, at the moment, just what that lone picket portended.
A glance in the direction indicated, revealed the truth of Captain Lovell' s declaration but, recalling what General Custer had said, I replied :
"The general said we might expect some mounted men of the Seventh from that direction." "But that vidette is a rebel," retorted Lovell, "he is dressed in gray. " "It can't be possible," was the insistent reply, and the column kept on moving.
Just then, the man in the woods began to ride his horse in a circle. "Look at that," said Lovell; "that is a rebel signal; our men don't do that."
The truth of the inference was too evident to be disputed. Things were beginning to look suspicious, and in another instant all doubt, if any remained, was set at rest. The horseman, after circling about a time or two, brought his horse to a standstill facing in the direction from which we were approaching. There was a puff of smoke from the muzzle of his revolver or carbine, and a bullet whizzed by and buried itself in the breast of one of the horses in the first set of fours.
"There, — it," exclaimed Lovell. "Now you know it is a rebel, don't you? "
The information was too reliable not to be convincing, and the regiment was promptly brought front into line, which had hardly been accomplished, when shots began to come from other points in the woods, and no further demonstration was needed that they were full of confederates.
Posted by Dennis Segelquist at 9:15 PM No comments: 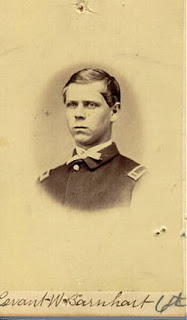 The Michigan Sixth Cavalry, was known as Custer's Cavaalry Bigade.

The following was taken from a book written by Coloner J. H. Kidd, of the Sixth Cavalry.


Levant W. Barnhart was but nineteen years of age and a boy of remarkable gifts. He was one of the prize taken in scholarship when he entered the University ( West Point? ) in 1860, in the class of 1864. His rise in the volunteers was rapid, passing successively through the grades of First Sergeant, Second and First Lieutenant. He in 1863, was detailed as acting adjutant. While serving in this position he attracted the notice of General Custer who secured his appointment by the War Department as asistant adjutant general with the rank of Captain. He served on the staff of General Custer till the war closed.
Levant W. Barnhart was born in 1844 and died in 1898, his burial was at Riverside cemetery, Denver Colorado.

﻿﻿﻿﻿﻿﻿﻿﻿﻿﻿﻿﻿﻿ ﻿﻿﻿﻿﻿﻿﻿﻿﻿﻿﻿﻿﻿
John Brent Fishback, was born on December 14, 1841, to William Norval Fishback and Harriet McClary, in Garrard county Kentucky. Later in life he would marry Mary Bulkey, on November 11, 1868. Later he would marry his second wife Margaret Mitchell Ballard on March 29, 1898 or 99. There was no record found on any children to these unions. John Brent Fishback, would die some time after 1909, at Winfield Kansas iin the county of Cowley.
Note. The above Information was found at ( Familysearch.com.)
When the war of the rebellion started he enlisted into the First Kentucky Cavalry, company L. His service would run from 1861 through 1864. While in the cavalry he would have many adventures and come close to death many times. The First Kentucky was in many encounters and these encounters can be read in the regimental history, a book written by Sergeant E. Tarrant, called; The Wild Riders of the First Kentucky Cavalry.
Note. The following Information was taken fron the book.
Page 175.
After the mortal wound of Carter, Captain J. B. Fishback assumed command of the First Kentucky detacnment, and fought Morgan's forces for some time, when finding his little force about to be surrounded, he, with marked skill and bravery, withdrew his command and retreated his regiment at Jamestown, without sacrifieing a man on his retreat.
Company L.
This company was enlisted and organized at Somerset, Polaski, county Kentucky, September 11, 1861, arrived at camp Dick Robinson, September 13, 1861, and was muster into service October 28, 1861. The regiment would be muster out on December 31, 1864.
The service record of John Brent Fishback.

He enlisted September 11, 1861, he entered the service as a First Sergeant, was promoted to First Lieutenant on March 3, 1862. He was promoted to Captain July 31, 1862. He command the regiment after the death of General Sanders, November 18, 1863. He commanded until the cavalry was reorganized in Kenyucky in the spring of 1864. He resigned on June 14, 1864.
Posted by Dennis Segelquist at 7:17 PM No comments:

I ran across this report will looking for something else and found it interesting. If any one knows the story behind this event I would like to hear about.
------------------

The general commanding, satisfied that the citizens of the town of Rocheport, in Boone County, Mo., have countenanced, tolerated, and fed, if not encouraged, gangs of bushwhackers and other outlaws, for the last six weeks, and being apprised that a gang of these villains in open daylight shot and murdered Thomas Waterman, the only support of a widowed mother and two sisters, on the steam-boat Buffington, at the landing of said town, orders that the sum of $10,000 be collected from the disloyal citizens of Rocheport and paid to the chief quartermaster of the department for the use of the widow and sisters of said Waterman. The district commander is charged with the execution of this order.

By command of Major-General Rosecrans:

Assistant Adjutant-General and Chief of Staff.
Posted by Dennis Segelquist at 3:03 PM No comments:

Note. The next names is mostly just that, but the main thing is to learn that your ancestor was indeed in the war.

2. Nehemiah Waterman Jr., To be Captain of the sixth company or trainband in the 20th., regiment of this colony.

9. Captain Sylvanus Waterman, to go to Jamaica to transact his business as a merchant.

11. Robert Waterman, to be Ensign of the fourth company or trainband in the 23rd., regiment of this state.

Note. I had to stop here as I found that Waternam was spelled to many different ways to put them all here. However if you had a ancestor in the Mass., regiments and falls under the following Surnames I will be glad to look for you. The names are; Waterman,Wartarmon, Warteman, Warterman, Watermon, Watermun, Watterman, Worterman.

Note. Once again this is a list mostly of names. The Rhode Island records are hard to work. Many of these names will have add information.

Note. All these names will have more information.

Note.These names will have more information.

Note. The information on the following names will be; Rank, Company, Regiment, Date of services and where the regiment served.

Note. There are just to many names to put their information here. I will have information on all these men, in the following state. You can write me for their info.

Authors note.  If you find a name of interest on this page and you would like to know more. Please state full name State and War. You can write to me at the following; dsegelquist1@cox.net
Posted by Dennis Segelquist at 4:44 PM No comments: