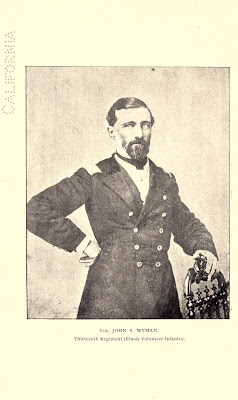 There has been a lot written about Colonel John B. Wyman, army career, and they say he was killed at Chickasaw Bayou, but they say noting on how he was killed or what happened after he was shot.  This little bit of information will put a little light on his last hours of life, and a little insight into the man.

Colonel John B. Wyman was killed at Chickasaw Bayou, December 28, 1862.  He had been surveying the field of operations on the rebel side, with field-glass, and had already been fired at several times by reble sharp-shooter's, but disregarding the danger, he seemed to think and in fact is said to have remarked, that the bullet was not made that could hit him; and so he was shot and received his death wound.

Captain Demont thus relates the incident; "Being the only officer near him when he was shot, I can testify that no soldier ever received his death wound with more sublime courage.  When I searched for the wound, I found the bullet had passed through his shirt in front of his shoulders, and remarked; This wound can not be dangerous Colonel, but with that pleasent smile so characteristic of him .  He said, "Oh: yes Harry, it is all over; this side is nearly paralyzed already."  He never complained, the same pleasent smile spread over his features when any member of his regiment approached."

His remains were taken back to his home at Amboy.  His burial was at Prairie Repose Cemetery.  He was later removed and interred in Rose Hill Cemetery in Chicago.
Posted by Dennis Segelquist at 4:37 PM No comments: