MAJOR: I have the honor to submit the following report of the operations of the command during the recent movement on Hatcher's Run:

At 8 a.m., on the 5th instant, broke camp near Gurley's house and marched down the Halifax road to Rowanty Creek; crossed the creek and so on to the intersection of the military pike road with the Vaughan road. Here the command lay in line of battle until midnight, when it moved back on the Vaughan road and occupied a line of breast-works to the left of the road, about a mile west of the run. At 1 p.m. moved out to the support of Gregg's cavalry, who were skirmishing heavily with the enemy some distance farther down the road. Relieved the cavalry pickets with the One hundred and forty-sixth New York Volunteers, and deployed the Fifth New York Veteran Volunteers and One hundred and fortieth New York Volunteers on the right-hand side and the Fifteenth New York Heavy Artillery on the left-hand side of the road in a large open field. These dispositions had hardly been made before our cavalry advanced to the attack with two brigades, and a third in support. They soon became actively engaged with the enemy's infantry, and, getting rather roughly handled, retired in considerable confusion, the enemy closely following. I immediately ordered up my three regiments at a double quick, and, delivering some very fair volleys, succeeded in checking their advancing column and driving it back to its shelter in the woods. Once or twice again the enemy attempted to advance over the open, but each time were handsomely repulsed by my troops, who fought with great spirit. Finally, about 5 p.m., being relieved by the First Brigade, First Division, and having replenished our cartridge boxes, we were ordered out on picket, covering the road leading to Dabney's Mill, where we remained until the afternoon of the 7th.

I regret to mention the loss of Captain Charles S. Montgomery, commanding Fifth New York Veteran Volunteers, who was shot through the brain during the engagement. He handled his regiment in a most creditable manner, and is a severe loss to the command. It is but simple justice to say that I have rarely seen troops fight with more animation or maintain their ground so stubbornly against such superior numbers as confronted them in the earlier part of the engagement. With such troops I shall always feel confident of success. From my staff-Lieutenant Campbell, acting assistant adjutant-general, and Lieutenant Leatz, aide-de-camp, and Lieutenant Raymond, pioneer officer-I received the most efficient assistance, and each and all of these gentlemen were conspicuous along the line, encouraging the men by their gallant bearing.

In nearly every one of the numerous battles we have had with the enemy, my command had to lament the loss of some of its bravest and best, and the battle of Five Forks was not an exception to our former experience. Bvt. Brigadier General Frederick Winthrop, colonel of the Fifth New York Volunteers, commanding First Brigade, Second Division, was mortally wounded at the head of his command while making a successful assault. His conduct had always been distinguished for gallantry of action and coolness of thought, and no one carried with him more of the confidence and inspiration that sustains a command in trying scenes. His countrymen have lost no one of their soldiers who more deserves a lasting place in their memory. 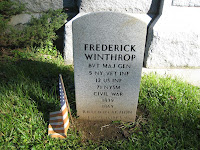 On her last voyage, the ship ran into a heavy gale within hours after leaving San Francisco harbor and steaming north. Most of the passengers on board the Brother Jonathan became seasick and were confined to their rooms by the continuing storm of “frightful winds and stormy seas”. Early Sunday morning, July 30, 1865, the steamer anchored in Crescent City harbor on the first leg of its trip to Portland and Victoria, B.C. After leaving the safety of the bay that Sunday afternoon, the ship ran headfirst into more stormy conditions. The seas were so bad near the California-Oregon border that the captain ordered the ship turned around for the safety of Crescent City. Forty-five minutes later on that return and close to port, the ship struck the rock, tearing a large hole in its hull. Within five minutes, the captain realized the ship was going to sink and ordered the passengers and crew to abandon ship. Despite having enough lifeboats to hold all of the people on board, only three were able to be deployed. Acts of courage and desperation, fear and self-sacrifice, were numerous. The rough waves capsized the first one that was lowered and smashed the second against the vessel's sides. Only a single surfboat, holding eleven crew members, five women and three children managed to escape the wreck and make it safely to Crescent City.

Among the victims were Brigadier General George Wright, the Union Commander of the Department of the Pacific; Dr. Anson G. Henry, Surveyor General of the Washington Territory, who was also Abraham Lincoln’s physician and closest friend; James Nisbet, a well-known publisher, who wrote a love note and his will while awaiting his death; and Roseanna Keenan, a colorful San Francisco madam, who was traveling with seven “soiled doves”. As a result of this tragedy, new laws were written to increase passenger-ship safety, including the ability of lifeboats to be released from a sinking ship.

Civil War Union Brigadier General. A graduate of West Point, George Wright's gallantry in the field earned him commendations; from the Seminole War in Florida, to the Mexican War, to the Indian Campaign in the Pacific Northwest. During the Civil War, President Lincoln gave him the command of the Pacific Coast.

Authors Note.  I was hoping to find a lot more but was unable to.  The only other two I found are the following.

First Lieutenant, Edward D. Waite, was promoted to First Lieutenant March 9, 1863, was killed on the steamer Brother Jonathan, July 30, 1865, while enroute to Headquarters Department of the Columbia.

Assistant Surgeon, Alexander Ingram, of Ohio, became Assistant Surgeon, May 28, 1861, was killed on the steamer Brother Jonathan, July 30, 1865, while enroute to Headquarters Department of the Columbia
Posted by Dennis Segelquist at 10:24 PM No comments:

Civil War Confederate Army Major General. He was killed during the July 1864 Battle of Atlanta. He is buried in a family cemetery now on the grounds of Augusta College. The cemetery is normally kept locked. A mortuary cannon was erected on the spot where he fell, and is located today on the northbound side of Glenwood Avenue in Atlanta.
Burial: Walker Family Cemetery, Augusta, Richmond County Georgia.
Posted by Dennis Segelquist at 3:51 PM No comments:

Godfrey Brereton From Boy To Commander.

Commander Godfrey Brereton was born on 21 April 1793. He was the son of Lt.-Col. William Brereton and Mary Charlotte Lill. He married Catherine Reid, daughter of Alexander Reid, on 2 August 1853. He died on 25 September 1874 at age 81, without issue. He gained the rank of Midshipman in 1809 in the service of the Royal Navy, taking part in capture of LeVar off Corfu. In 1814 He took part in the reduction of the Ionian Islands of Zante, cephalonia and Santa Maura. He retired from the military in 1837, with the rank of Commander, late of the Royal Navy. He held the office of Justice of the Peace (J.P.). He lived at Esky, County Sligo, Ireland. He lived at Queenstown, County Cork, Ireland. He held the office of High Sheriff in 1874.
Posted by Dennis Segelquist at 2:18 PM No comments: 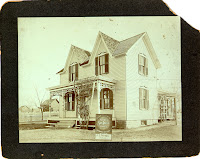 I first ran across the name of SunProof Paints was when I was doing some research for my Kansas web site.  I thought the name was interesting so I started looking into it. I found the company started in 1855, beyoud that I could find little eles.  I could find a lot of old advertisements as this page shows but no history on the paint.  The selling of SunProof paints is still going strong to day.  Pittsburgh Glass Co., is the distributor today.  SunProof paints had been around almost thirty years before Pittsburgh Glass Co., started.

I wanted to know how they got a hold of SunProof paints and what was the history behind it but I had no luck on the web so I called the Pittsburgh Glass Co., but after playing leap frog with the phones and a little red tape I finally give up.

I was able to find this little bit of information on Pittsburgh Glass Co.

In 1883, Captain John B. Ford and John Pitcairn established the Pittsburgh Plate Glass Company (PPG). They set up shop in Creighton, Pennsylvania, along the Allegheny River about 20 miles north of Pittsburgh. PPG became the first commercially successful producer in the United States of high-quality, thick flat glass using the plate process. The company was also the world's first plate glass plant to fuel melting furnaces with locally-produced natural gas. This innovation quickly stimulated widespread use of clean-burning gas as an industrial fuel.

Although I have little information I still wanted to do some kind of page on SunPProof Paints.  Their advertisements are interesting to look at and some are very colorfull.  The picture at the top is the home of Joseph Lockwood rogers of Vermillion Kansas taken between the 1890's and 1904, notice sign in the front yard.  The second picture is of a  add for the years between 1925-1930.  The third picture is a pin advertising SunProof Paints they used the sun as they logo.

They use the sun in a lot of their advertisements  it made them very colorfull.  Sun Proof Paints advertised on all most anything wagons, walls trucks, lunch pales and umbrellas.  They sold the paint where the dealer could get the people to sell it.  Take the fourth picture it's a Post Office in Riverdale New Jersey ran by S. J. Garrison's who advertised P. O. & Economy cash, Notons, Groceries, Hardware, Rubbers and Patton's SunProof Paints.  There is no information on the last picture but it's interesting to look at.

Maybe one of my readers willl see the page and have some interesting information to add to these page it will be most welcome.

On a last note. to enlarge any of the pictures just push on one of them. 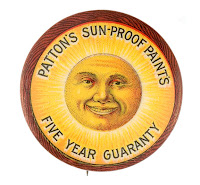 Posted by Dennis Segelquist at 1:56 AM No comments:

Civil War Confederate Brigadier General. At the start of the Civil War, he was a lawyer in practice when appointed a Major in the 18th Alabama Infantry. With the 18th Alabama, he fought at Corinth, Mississippi, Shiloh, Tennessee and was promoted Lieutenant Colonel in July, 1862. In 1863, he was sent to the Army of Tennessee, was promoted Colonel and led a regiment at the Battle of Chickamauga, Georgia. After the fight at Chickamauga and siege of Chattanooga, Tennessee, he received a promotion to Brigadier General in June, 1864. As General, he led a brigade through the Atlanta Campaign serving as General John Bell Hood's Army rear guard until ordered to Mobile, Alabama at the end of the war. Following the war, he resumed legal practice and served on the Alabama Railroad Commission.
Posted by Dennis Segelquist at 12:21 AM No comments: