In the battles of Lundy's Lane and Plattsburg; wounded in the shoulder.

.
Posted by Dennis Segelquist at 1:14 AM No comments:

Authors note: Sold his wife is no error at that time one could sell one's wife.  It cost to much for the poorer man to get a divorce.
Posted by Dennis Segelquist at 2:03 AM No comments: 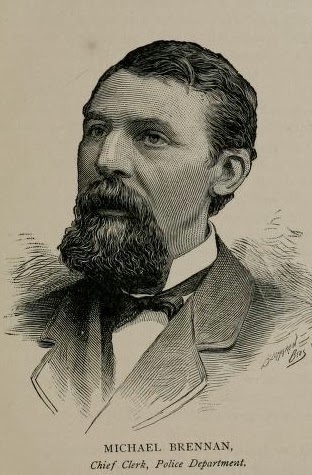 Push pictures to enlarge.
This is a picture of Michael Brennan, as Police Clerk, of the Chicago police department in 1887.
He would be appointed Police Chief six years later on September 11, 1893 through 1895. 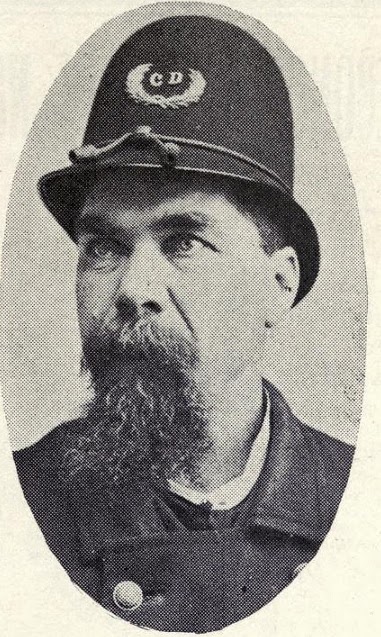 I believe this is a picture of Patrolman James Brennan who is some time mistaken for Michael Brennan.
The top picture came from the History of the Chicago Police Department, published in 1887.
The bottom picture was taken from the History of the Chicago Pensioners Ass'n published in 1916.
I have their information from these two works, what I'm looking for is more personal information, like who's the wife and children and so on.
If you have any information on them I would like to hear about it, so I can post it here.

When researching the revolutionary war you can find many records.  Some of these records are military, pension and state and  county records.

For this post I will be talking about the pension rolls, there are many kinds of pension rolls, some are put out by the state, county and some towns put some together.  The best pension rolls are the one put out by the United State Government, in 1835, it was put together from different government departments. Covering the years of 1828, 1832, 1833, 1834 and 1835, these rolls cover the Revolutionary War through the War of 1812.  Its known as the United States Pension Rolls, and are in three volumes.

Its important when researching a revolutionary ancestor to look at as many pension rolls as you can.  There are many persons within the same state with the same name, some may have died or just moved, they may be found in one state then found in another state years later.

I was researching pension rolls for surnames, those of you who been to my site many times known this site was built upon the surname and of course other historical events, but the main theme is the surname.  The pension roll I found was that of the sixth census of 1840.  Now what's different about this roll is that not only does it give you the State but the county and town, age and the person they are living with.

As you know there thousand of names on these lists and no way possible for me to list them all, so I will only list a few states.  After looking over this list if you find it helpful and would like a search for a ancestor you may request one.

When requesting a search give the title of the post ( Revolutionary Pensioner Roll of 1840.), and not of the web site.  My E. Mail address can be found in my profile.

This is for the author only so the list can be found again when needed.
A census of pensioners for Revolutionary or Military Services.

Posted by Dennis Segelquist at 12:18 AM No comments:

The Brigantine Convention had 6 guns and a crew of 20.

The following list of names was taken from the muster roll of the Convention.


We were unprepared for the following information which comes from Michigan. There has been an investigation of the cruelties said to be perpetrated on the prisoners at the State Reformatory at Lansing, resulting in the usual exoneration. From the Detroit News, we quote part of the testimony before the investigating committee. "Harry L. Hurlburt, warden of the prison, explained to the committee how the flogging apparatus is worked. The man to be flogged is blindfolded, handcuffed and shackled at the ankles. Then he is stretched out on a long ladder which is made to fit snugly over a barrel. His hands and ankles are fastened to the ladder.

"The prisoner is blindfolded, the warden said, so he will not see who is flogging him. His back is bared and a piece of stout linen cloth placed over the bare spot. The instrument used in the padding is a heavy strap about four inches in width, punched with small holes about an inch apart, and fastened to a handle. The strap is soaked in water, according to the warden, till it becomes pliable.

"Dr. Robert McGregor, prison physician, holds the pulse of the man being flogged and gives the signal for the flogger to stop.

No. 1.,  ” Thomas Schultz. Boy of 21 years old, seven months after being sent from the insane asylum was given 181 lashes and kept in the dungeon during period of the floggings for nine days, and fed on bread and water.

May 15. 1920- Sent to Ionia State Hospital for the criminally insane.

Nov. 3, 1 920. Three months later, assaulted a guard. For this and a few minor offenses, none of them serious, he was sentenced to receive 181 lashes.

He was kept in the dungeon during this time and for nine days was fed on bread and water.

On Nov. 30 he was returned to Ionia Insane Asylum and is still there.


Posted by Dennis Segelquist at 3:59 PM No comments:

Union & Confederate Soldiers of the Rebellion.

Isaac Etchell, Private, CO. D., 72nd., Pennsylvania infantry, wounded in left side of the chest, by a round ball, at Antietam, September 17, 1862, out come unknown.