From the Kentucky Adjutant General Report

Names and Regiments are not in any order.

R. A. Alston, A. A. G.,Captain,Field & Staff of Brigadier General John H. Moran;Killed in a private quarrel at Atlanta,Georgia,in 1868.

Posted by Dennis Segelquist at 9:56 PM No comments:

Author.  If any one has information on him I would like to hear about it, all information will be posted here.
Posted by Dennis Segelquist at 12:35 PM No comments: 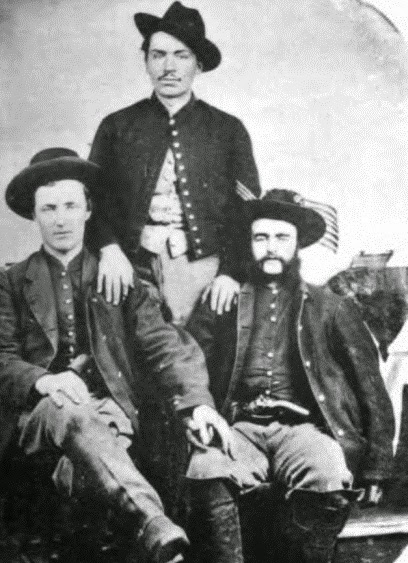 Winfield S. Collins was one of the first to respond to the call for  men to form a regiment of cavalry in Maine. He enlisted and was assigned to Co. E. Soon afterwards he was made corporal. At Camp Bayard, in 1862, he was made sergeant. His soldierly bearing was a model for his comrades, and his bravery on the battle-field won the highest admiration. ,0n  the thirtieth of December, 1863, he reenlisted as a veteran volunteer; on  the eighteenth of July, 1864, he was mustered as first lieutenant of Co, E,  First Maine Cavalry, and as such served until the first of August, when he was assigned to the command of Co, M, Here was an opportunity to display his military talent, which, with his kindness, won the hearts of all under  his immediate command, and elicited the highest praise of his superior  officers. There was every prospect of his soon receiving higher rank, with  military honors.

Again our columns move on the enemy. The First Maine Cavalry has the advance. It was the afternoon of the twenty-seventh of October, 1864, in  the hottest of the fight, that the First Maine was ordered to charge. At the  head of his company, with stern but cheering words of command, he led them on, until a bullet came crashing through his temples. He fell, never more to give command to his brave followers, and amid the fearful carnage  was carried from the field. He was taken to the Yellow House, where he died the following morning, and near which he was buried. "Young and brave, he sacrificed his life for his country, and in years to come his memory shall lie blessed. — Adjutant General's Report, 1864-5.

James J. Gray.
No other records found.
Posted by Dennis Segelquist at 12:43 AM No comments:


Arthur L. Swartz, a well-known and well-to-do farmer of Amo township, Cottonwood county, is a native of Iowa, born in Clinton county, that state, October 25, 1863, son of Henry and Eliza (Koch) Swartz, natives of the state of Pennsylvania, who came West about 1852 and settled in Clinton county, Iowa. Henry Swartz was a carpenter by trade, but the most of his life he spent farming. During the Civil War he served as a private in Company F, Tenth Regiment, Iowa Volunteer Infantry, attached to the Fifteenth Army Corps, and during all the period of his service was neither wounded nor taken prisoner.

In 1868 he and his family moved from Clinton county to Cedar county, Iowa, and established their home there.In that latter county Mrs. Swartz died in 1883. Henry Swartz spent his last days in Ida county, same state, where his death occurred in 1906. He and his wife were members of the German Reform church and their children were reared in that faith. There were seven of these children, of whom the subject of this sketch was the sixth in order of birth and the first two of whom died in infancy, the others being Ella F., who died in 1915, George Peter, William J. and Burdette.

Reared on the paternal farm, Arthur L. Swartz early began farming for himself and after awhile located on a farm in Cherokee county. He married in 1890 and in 1895 disposed of his farming interests in Iowa and came to Minnesota, locating in Cottonwood county. He bought the farm of one hundred and fifty acres on which he now resides, in Amo township, and there he and his family have made their home ever since, being very pleasantly and comfortably situated.

Mr. Schwartz is an excellent farmer and his place is well improved and profitably cultivated, he long having been recognized as one of the substantial farmers in that section of the county.It was in 1890 that Arthur L. Swartz was united in marriage to Lizzie Springer, who was born in Pennsylvania, daughter of Harry Springer and wife, natives of that same state, who came West and settled in Ida county, Iowa, where they spent the rest of their lives. Harry Springer was a veteran of the Civil War and a substantial farmer in the community in which he lived in Iowa. To Mr. and Mrs. Swartz eight children have been born, Earl H., Mabel A., Ethel M., Bessie A., Lewis M., Willis C, Coral and Angie Iris Zaida.

Posted by Dennis Segelquist at 12:38 AM No comments:

JOSEPH H. CHRISTY, Post Office Greenton, Mo., is the son of Bainbridge and Dulcina Christy, and was born in this county, Oct. 18, 1839. He was raised and educated in this county and has lived here all his life. His parents were from Kentucky and came to this county in 1837. He has been occupied in farming and stock-raising, and has a fine farm of 440 acres in the Greenton Valley. He was married to Miss Martha Stapp, Oct. 24, 1866 granddaughter of Allen Jennings, who came to this county at an early day. They have four children living Elnora, Alma S., Lucy H. and Joseph Gilbert.

In August 1861 he enlisted in Capt. Keith's company, M. S. G. and was wounded at the siege of Lexington, Mo., which disabled him for a year. He then went south and enlisted in Bullard's company, Gordon's regiment, Shelby's command, C. S, A., and was in the battles of Lexington, Cape Girardeau, Helena, Bayou Metre, Little Rock, Mark's Mills, Poison Springs, Newtonia three times, Westport, etc. surrendered June 12, 1865 at Shreveport. He is a deacon in the C. P. church, and also a member of the Grange.

Hopkins Hardin was a Confederate soldier and served in the 19th Virginia, Pickett's Division. He was lieutenant of Company C. Lieutenant Hardin entered the Army in April, 1861, at the age of 23, enlisting at Scottville, Albemarle County, Virginia. He fought in all the principal battles and skirmishes of his division, taking part in such actions as those at Bull Run, first and second battles, Williamsburg, Fredericksburg, Boonsborough, and, last of all, he was in that great decisive battle which determined the fate of the Southern Confederacy, the battle of Gettysburg.

In this battle he was wounded three times. He had been wounded previously at both Fredericksburg and Boonsborough. There was no question as to his bravery, his ardor, his enthusiasm in battle. Young Hardin was a typical Virginia soldier.

At Gettysburg he was unfortunately captured, after an active service of over three years. From that time until his release at Ft Delaware in June, 1865, nearly two years, he suffered the hard ships of a prisoner of war. Some of his privations and sufferings were unusual. He saw the inside of the Federal prisons at Ft. Mc Henry, Point Lookout, Ft. Delaware, Morris Island, and Ft, Pulaski. At the latter place the prisoners were fed on bread and pickles for forty-nine days in retaliation for the treatment of Federal prisonerg at Andersonville. Many died and few were able to walk at the end of the time. Lieutenant Hardin was one of the 600 Rebel prisoners who were placed outside the Federal breastworks at^ Morris Island, where for weeks they were exposed to the shot and shell of their friends who were bombarding the place.

Lieutenant Hardin's life was saved once by a note-book. It arrested the flight of a Minie ball speeding straight for his heart. A jagged hole was torn through a number of the leaves. The bullet stopped when it reached an old yellow paper, which it cracked in four parts without penetrating. The yellow paper was a document authorizing Hopkins Hardin to exhort in the Methodist Episcopal Church.

Lieutenant Hardin has long been a resident of Missouri, and he has been a successful farmer and business man. He resides with his family in Independence, Mo.

Posted by Dennis Segelquist at 12:33 AM No comments: