The horse of John W. Gray was killed, which in falling caught his leg, holding him fast for a moment. He soon was free and on his feet, and, emptying his revolver, he- jumped on behind a comrade and came out ready for duty, though minus a valuable horse.

John W. Gray was from West Brownsville. He was promoted to corporal for bravery. He had his horse shot dead in the first advance on Romney, September 23rd, 1861.  He died near  Pittsburgh, March 11th, 1903. Few men were braver and none more loyal. He was bugler ot that company for over a year. He was also the youngest man in the company.

Posted by Dennis Segelquist at 4:14 PM No comments:

Byron D. Hoitt of Northwood was wounded in head and side, and would have been killed but for a piece of castile soap and a large bone ring in his pocket. The ring had three hearts on it, and was broken. An old copper cent also helped receive the ball.


The following was taken from 132nd. Regimental History.

After getting into our new position, I at once began to look up our losses. I learned that Colonel Oakford was killed by one of the rebel sharp-shooters just as the regiment scaled the fence in its advance up the knoll, and before we had fired a shot. It must have occurred almost instantly after I left him with orders for the left of the line. I was probably the last to whom he spoke. He was hit by a minie-ball in the left shoulder, just below the collar-bone. The doctor said the ball had severed one of the large arteries, and he died in a very few minutes. He had been in command of the regiment a little more than a month, but during that brief time his work as a disciplinarian and drill-master had made it possible for us to acquit ourselves as creditably as they all said we had done. General Kimball was loud in our praise and greatly lamented Colonel Oakford's death, whom he admired very much. He was a brave, able, and accomplished officer and gentleman, and his loss to the regiment was irreparable.

Had Colonel Oakford lived his record must have been brilliant and his promotion rapid, for very few volunteer officers had so quickly mastered the details of military tactics and routine. He was a thorough disciplinarian, an able tactician, and the interests and welfare of his men were constantly upon his heart.
Posted by Dennis Segelquist at 11:04 AM No comments:

Anne his wife asked congress for a pension which was approved February 16, 1869, pension stared from April 1, 1864.
Posted by Dennis Segelquist at 4:09 PM 3 comments:


From the Library of Congress.
Chap. CCXCL.  An act granting a pension to James Rooney
Be it enacted bt the Senate and House of Representatives of the United States of America in Congress assembled, That the Secretary of the interior be, and he is hereby authorized and directed to place on the pension roll, subject to the provision and limitations of the pension laws, the name of James Rooney late member of company B., seventh Missouri Cavalry, commencing April fourteenth, eighteen hundred and sixty-three.
Approved July 27, 1868.
Posted by Dennis Segelquist at 11:12 AM No comments: 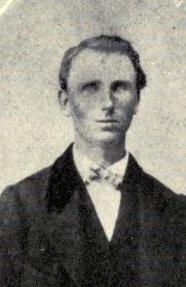 Sergeant Alfred Shively of Company F was conspicuous for his bravery. Colonel Moore, in a letter, says : "When last I saw this young man, he had rushed some distance in advance of his company of brave comrades, for he had as brave men by his side as ever stood in battle, waving his hat and shouting, 'Come on, boys, the day is ours/ I trembled for his safety in his exposed position. The carnage about this time was terrible. And there he went down. His comrades are of the opinion that he was instantly killed."
Posted by Dennis Segelquist at 10:53 AM No comments: