Drying the civil war there were hundreds of steamers on the rivers of the united states. Many of this ships names are lost to history. I have been asked many times over the years if I heard of a ship or heard of a person on one of these lesser known ships. One problem with these steamers is that many were owned by small companies or private citizens. Some of these ships were leased by the army to transport troops up and down the rivers. If the need came some of these ships were commandeered and were sunk or destroyed before the captain could record them in his logs, and so the name were lost to history.

There are many Steamers named in many reports, but the reports are to long and to many to list here. So I will list the steamers and if you see a name of interest you can request a lookup. My address can be found in my profile. Please state the title of this page when asking for information or I may not be able to help you.

I realize this is a short list but many of the steamers are stated together in the same reports and makes for interesting reading.
Posted by Dennis Segelquist at 5:35 PM 2 comments: 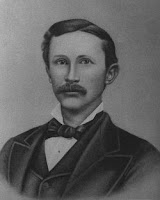 Photo provided by Naomi McFadden.
In 1861, he enlisted in the early part of the year in the C. S. Army, joining Co. B, Twelfth Alabama Infantry, was made sergeant, and served until the fall of that year when he was discharged because of ill health. In the spring of 1862 he entered the Second Alabama Cavalry as a second lieutenant; was promoted a year later to first lieutentant; and in June 1863 was retired on account of wounds received at Mud Creek, Miss.
Note. To learn more about him and his family take this link.
http://www.findagrave.com/cgi-bin/fg.cgi?page=gr&GSln=gaddis&GSfn=william&GSmn=p&GSbyrel=in&GSdyrel=in&GScntry=4&GSob=n&GRid=54180260&df=all&amp;
Posted by Dennis Segelquist at 1:00 AM No comments: