William. P. Hiserodt, promoted Sergeant, thrice wounded and captured at Pleasant Hill, escaped and ached our army at Vicksburg; furloughed himself, and came to Iowa with Captain Ackerman; returned and served through the entire Missouri. Nashville and Gulf campaigns; was discharged for disability at Montgomery. July 17. 1865.


Comrade Hiserodt was a man of rare bravery and resources; of great endurance; and would put down the rebellion if it took the last ham. chicken, or horse in the Confederacy. Illustrative of this it is told of him that in Montgomery after Bragg's force was disbanded there, "Bill" was in a saloon, and heard a rebel Major raving about the results of the surrender and his embarrassment at being compelled to go home without ever being whipped, etc., etc.

"Bill" finally told him to square himself and he should have something that he could talk about to his folks at home; and proceeded at once to administer to the boastful and hitherto unwhipped rebel a most thorough and severe beating in the most approved knock down style. After he returned to his home near Robertson he engaged in farming and raising live stock; was elected Justice of the Peace; was a member of the Board of Supervisors; took an active part in the prosecution of outlaws in chat region: and died there in 1894.

Posted by Dennis Segelquist at 4:48 PM No comments:

On the 27th day of October, Lieut. D. H. Lee, of F. Company, then on staff duty, went in command of a detail, among which was two or more of our regiment. He had with him probably a dozen men. His duty was to find and bring into camp some citizens whose testimony was wanted by a Confederate who was being held as a spy.

When Lee, with his command, had gone some miles outside our lines, and while bearing a flag of truce, was surrounded by a band of guerillas, under command of one Jenkins, and although they displayed the white flag, they were denied its protection and a fight began, in which every man but Lee and one private, a Thirty-second Ohio man, was killed.

Lee was yet unhurt when the guerilla captain called to him to surrender and his life would be spared. On this Lee threw down his arms and the guerilla force gathered around him, and while the captain was talking with him, one of his men came up and shot Lee with a revolver through the back of the head. They took from his finger a diamond ring that had been given Lieut. Lee by his young wife, whom he had married when home on veteran furlough.

His body, with that of others, was thrown into a ravine and covered with brush, where it lay until the summer of 1865 after the surrender when the father of the young lieutenant went south, and with the aid of some of the citizens of a hamlet near by, recovered the remains of his son, which he was able to identify by the clothing. He was also fortunate enough to recover the diamond ring, which was in possession of an old citizen who claimed to have bought it from one of the guerillas.

Note His Burial is unknown.

Posted by Dennis Segelquist at 12:56 PM No comments:

James T. Guppy. Age 21 ; born in England ; farmer ; enlisted from Atioch ; at the battle of Chickamauga two bullets passed through his hat, one giving him a scalp wound ; remained on the battle-field that night, and next morning was aroused by a Rebel surgeon, who gave him the first definite knowledge that the Federal forces had retreated ; he then made his way back to Rossville ; was with the Regiment until near the close of May, 1864, when he was sent to Jeffersonville hospital, sick, re mining about a year ; is charged at Louisville, Ky., May 29, 1865; is farming at Mankato, Jewell County, Kansas.
Posted by Dennis Segelquist at 6:54 PM No comments: 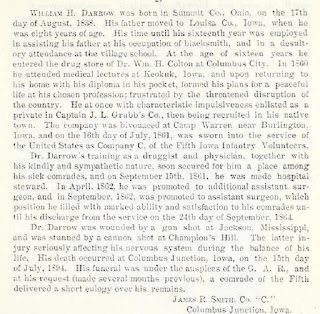 Posted by Dennis Segelquist at 1:20 PM No comments: