Though a boy in years he was a man in all thru it takes to make a brave soldier, and whether we find him riding through the darkness side by side with the brave men who burned the bridge, standing his ground with the bravest at Taylor's Ford or marching and fighting with his company at Greeneville at the death of Gen. Morgan, in the charges at Morristown and Fort Brecenridge and Saulsbury, and in all the marches and battles in which his Regiment was engaged he is the same brave and fearless boy.

Corporal Burchfield has had a varied experience since the Civil War. He first went west and located at Athens, Ill.., in January, 1866, and later removed to Iniopolis, thence to Niantic, and then to Springfield, Ill.. At the latter place he was married to Miss Margaret Baumgardner, December 10, 1868, and settled at Niantic, Ill. He removed to Kansas in 1886 and thence to Washington, D. C, in December, 1890, where he resided until recently, 1902.

While in Washington he was appointed on the Capitol Police force until relieved by change of administration, but was re-instated in 1899.

We are pleased to note that our friend has received an honorable and lucrative position in the Mountain Branch  of the National Soldiers' Home for Disabled Veterans at Johnson City, Tenn.
Posted by Dennis Segelquist at 11:08 AM No comments:


Illinois Ninth Cavalry Regimental History.
Joseph O. H. Spinney enlisted from Bradford, October 14, 1861, in company K., of the ninth Illinois cavalry.
January 1, 1864, he re-enlisted as a veteran and was appointed Sergeant, and late was promoted First Sergeant of his company, in which position he served well and faithfully until he was again promoted to First Lieutenant, September 23, 1864.
On the promotion of Captain Clark to a majorship Lieutenant Spinney received his commission as Captain, remaining with the company until the final muster out at Selma, Ala., October 31, 1865.
Captain Spinney was one of the true and tried, who by his bravery and fine soldierly qualities won his way upward, and also gained the respect and esteem of both officers and men.  His genial, hearty speech and manner made him a general favorite.
His address, May, 1888, is Massena, Iowa.
Posted by Dennis Segelquist at 4:57 PM No comments: 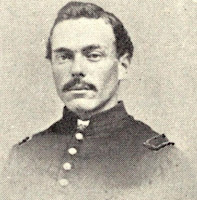 p. 65, A lull in the battle followed the repulse of the enemy. Although the battery was exposed to a hot fire of shot and shell, but one of its number was struck Private Charles A. Cuffel, who was serving the third gun at the lanyard. A Belgium musket ball, that had first struck the ground in front of him, glanced and hit him on the breast. He was, however, able to resume his post at the gun an hour later when the battle broke out afresh.
Posted by Dennis Segelquist at 12:27 PM No comments: 
From the 8th., Regimental History.
p. 51., Dr. Gale was well known in the state of Vermont as one of the fore- most men in his profession, was an accomplished scholar, and a gentleman of character and dignity. Governor Holbrook had appointed him surgeon of the regiment on account of his eminent abilities, but the short time which he remained with them afforded very little opportunity for the display of professional skill. After his resignation was accepted, and before his return for home, the line officers signed resolutions which were handsomely engrossed, assuring him of their confidence, and regret at his departure.
Posted by Dennis Segelquist at 1:03 PM No comments: 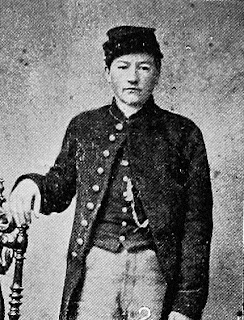