First I would like to thank Jack McConnell of Vintagephotosrus for allowing me to use his photo’s of George W. Ashby. Mr. McConnell had this to say about the Photo’s: The one thing I find interesting about the image showing him as a civilian is the photographer backstamp Lawrence Kansas. is that as you know Lawrence massacre accrued in 1863. We can date this CDV using the U. S. rev. stamp c1860-1866 since this is the time frame when the U. S. government used these rev. stamps to create rev. $$ for the U. S. government. So now I am trying to find out if Ashby was involved with pursuit of the outlaws that took part in the Lawrence massacre since he enlisted in 1862 and was in the area when this event took place and was in the union army. the one thing not clear on is why the second image has a photographer stamp from Iowa? If you have anymore info or suggestions let me know thanks jack.

If you have a answer to his questions, or are just interested in these type of photo’s his company Vintagephotosrus can be found on line or if you wish he can be reached at the following: vintagephotosrus@earthlink.net

Note. All these photo's can be enlarged by pushing on them. 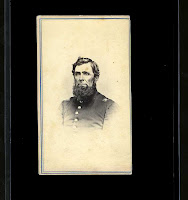 Jack McConnell Of Vintagephotosrus sent another photo of George W. Ashby it too was taken in Iowa. Mr. McConnell states that all photographers were required to collect a revenue tax for every photo image sold from their studios. The revenue stamps were required on photographs sold in the U. S., from 1864-1866, this was a taxation system to pay for the war against the Confederacy. Mr. McConnell also notes that this photograph was hand canceled with a fountain pen by the photographer by using his entails ( P. H. W.), this was required by the U. S. Government, it was to show that the stamp and been used and was canceled. McConnell also says to note that the photographers used the backs of the C.V. D. photo’s as advertising, as this photographer did here, which this photo shows that he not only took photographs but he was a dentist, artist and druggist, watchmaker and jeweler which Mr. McConnell thinks is quite unigue.
------------- 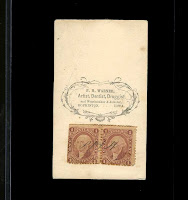 Mr. Shirley, of Buffalo, Wilson county, brings the news that G.W. Ashby was buried in the cemetery at that place last Sunday. No particulars concerning his death are reported, only that he died in Oklahoma. G. W. Ashby was Captain of a company in the 12th Kansas Infantry and served three years. He lived in Chanute a good many years. He owned for several years and improved the old Hawkins place south of town, now owned by Mr. Henry, and planted all those trees that have grown so large. He became involved in debt, in making his improvements and exchanged his little fruit farm, that had just began to bear, for dwelling property on South Junction Street where he lived for several years.

After moving to town he went into the furniture business on West Fourth Street with S. J. Hatcher. Captain Ashby was commander of the old G. A. R. Post, and was a candidate for Mayor once. He was a good officer in the army, a loyal soldier and as a citizen was jovial, friendly and was well respected. If there was any acid in the Captain’s system none of it ever worked out. He was commander at the time Dobbs and the Post played the Spy of Atlanta. He was enthusiastic in his activity in helping to reproduce on the stage the events of the civil war in which he had taken part in reality. The old soldiers and settlers of Chanute all knew him and will have no recollection of that acquaintance to jar their kindness for his memory.

It is said that every one makes the world better by coming into it and that they make it still better when they leave it. This may be true, yet it is open to serious doubt. Coming into the world is a matter of no particular importance to the world only to those directly interested, but how the new comer pass out is always a question more or less serious. “Going out of the world is a different thing altogether. Some people leave it, but leave no lingering regrets, while others die and leave many wishing that they could have staid longer. Captain Ashby was one of those frictionless characters that make the world a more congenial place to live. As his country stands trembling on the verge of another bloody conflict the Captain crosses the dark sea to join his comrades on the other shore.

Mr. Ashby had a lest one daughter and this was said about her on her death.

Sarah Frances Ashby Neff was born in La Doga, Ind., to Captain G.W. and Martha Ashby, on October 15, 1853. She came with her parents to Franklin Co., Kansas in 1858, settling at Prairie City. In 1870 she came with her father and grandparents, Thompson Ashby and wife, to Wilson county, living one mile east of Buffalo, afterwards making her home with her father in Chanute, Kansas. She lived in the state of Kansas 78 years. She was married to Omer P. Neff on October 24, 1876 at Iola, Kansas and lived on a farm six miles southwest of Buffalo, moving to Buffalo in 1888. She was a resident of Wilson county about sixty-six years.

It was in November, when Jack McConnell had sent me a new photo of George W. Ashby, and I thought it couldn’t get much better. Well I was wrong, I have just received a letter from him and he told he had two more and had this to say;

“I went back to that antique shop to check out what they had new. found another Ashby image along with a soldier with the num 11 on hat. Do you want a scan of this other Ashby image to add to your site? also ill send you a scan of the soldier. it came along with the other Ashby album I was told so I am guessing it was 11th regiment maybe you might know more and can help Let me know if you want a scan image and backside this time only has a rev stamp w cancel date 3-1865. so this image was taken just before the war was over, nice we have image before he joined and later in the army than another towards the end.”

“I hope you had a nice thanksgiving. yes that other cdv image of Ashby has some foxing on front but oh well. RE: The 11th, is the on the soldiers cap, is all I know about him the unique thing is this soldier has long hair style, dating the image using the type of cdv mount c1862 its an early mount and early large mount with large image of the soldier. so ill would like to see what you think of this guy and let me know.”

Well after a few week the photo’s finely came, he told me the reason why they were a little late in coming;

“I had to get back down to antique shop where I bought these images. to buy another image of Ashby when he was not in the army, I have enclosed a view of this as well. also where can I get more info on his family, due to I bought a stack of all of the rest of the cdv’s and appears we have a view of his dad and brother and I think his hole family. I am waiting for the store owner to bring me the empty cdv album these all came in so I can try to recreate the album back to its original state, I am hoping that within this album there will be some written info, not sure I don’t have album yet and owners not sure. Looking to hear from you, appears Ashby family was in Kansas and ended up after the war in Wisconsin? can you confirm? But I am sure all 33 cdv images are of the Ashby family. need some help if you can. anymore info on the Ashby family? also enclosed is the other view of him and the civil war soldier from the 11th hope you can get me some info on him as well. thanks jack.”

Well I was unable find any more information on the family or the soldier of the 11th, So Mr. McConnell and I are hoping some of you readers or members of the Ashby family well have some information to share with us, Mr. McConnell well be glad to hear from one and all. He can be reached at the following:


Mr. Jack McConnell.
vintagephotosrus@earthlink.net
Posted by Dennis Segelquist at 1:27 AM