Over the years I have done some research on the CSS Alabama and the findings of that research can be found at this site. Last month I received a mail from a gentleman by the name of Mr. François Crevel, and he wanted to share with me some newly discovered photographs of the CSS Alabama and USS Kearsarge, which have not been seen in over a hundred years. Well after I saw photographs I just had to have them on my site to share with my readers, and after many weeks of negotiations he has agreed. Now I would like Mr. François Crevel, to tell us about this grate photographs.

Note. These Photo’s can be enlarged by pushing on them.

When I did this page for Mr. François Crevel I don’t know how controversial these photos would be come, so much so I did other page on this controversy.

After reading this page you may want to read on what all the controversy is all about.

The title of the page is ( Controversy Over CSS Alabama & USS Kearsarge Photos), This link well take you there.
http://civilwarthosesurnames.blogspot.com/2010/01/controversy-over-css-alabama-uss.html 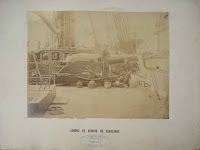 It is with great emotion that I wanted to inform you of a discovery which will obviously hold your attention. In fact, I discovered at a flea market in Normandy 6 photographs us back straight in an episode of the war of secession between CSS Alabama and USS Kearsarge. All have the stamp of Cherbourg photographer Francois Rondin, pledges of their authenticity. Analysis of these photographs was given to the American historian RON TARBURTON. 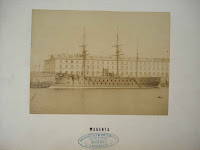 One of these pictures supposed to represent the crew of the USS Kearsarge in the form of a photomontage (see heading into the bottom of this photograph: N ° 7) has considered any advantage his attention since he is made of crew of the CSS Alabama with the top of the pyramid Captain Raphael Semmes.

After nearly 6 months of research by historians, the conclusion is unanimous. This is the crew of the CSS Alabama. Over 15 members of the crew have been formally identified from photographic data archives or from the uniforms they wore. One crew members that is identified is the black sailor David White who is present. this also proves that the photograph was taken a few days before the battle against the USS Kearsarge, as he was killed during combat in 1864. 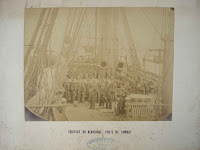 Another benefit of this photograph is the presence in the upper left form the mosaic picture of a ship which at first glance does not seem to be the CSS Alabama. But after a long process undertaken by RON TARBURTON to this day 14 points compared to the CSS Alabama were highlighted. It is indeed the ship CSS Alabama in June 1864 that would do battle against the USS Kearsarge.

We wish RON TARBURTON pay tribute to the crew and the ship legendary disseminating the photographs to the general public. I would like you to bring your contribution to this success. 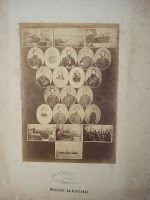 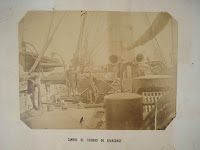 Warning these photographs are copyrighted and the copyrights are held by the owner and may not be reproduced in any format, any Persons or organizations desiring to use this material must obtain express written permission from the owner.
francois.crevel@syngenta.com 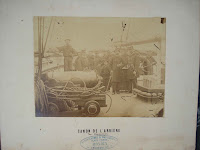 I was informed by Mr. Francois Crevel, That the photograph mosaic corresponds to James Dunwoody BULLOCH, the confederate officer in France who is responsible of the building of the ALABAMA at Liverpool. 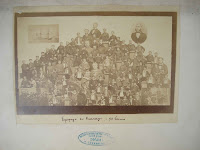 Francois Crevel has sent us new information on the recent discoveries of RON TARBURTON.

The photomontage of RONDIN appears to have been carried out in 2 stages according to the following scheme.

During his stopover in Cherbourg, a part of the crew of the Alabama was photographed by Rondin alone or in groups of 2 or 3., Then it was after the fight that Rondin decided to make a portfolio consisting memory seems there a ten photographs to sell to the public who wished to have a memory of this episode and it is in this spirit has been made the montage of the crew of Alabama from portraits before the battle.

This is in part because of the discovery in 2005 of photographs of some crew members taken in Cape Town in 1863 (acquired by Meyerside museum in England) that Ron has come to this deduction. Indeed among the crew photographed William Robertson, who has paid a heavy price during this battle since it is the only officer who lost his life. And it is clear that is actually the top of the pyramid and not the man Raphael Semmes as we could have claimed earlier. In addition, Raphael Semmes has hardly set foot in Cherbourg during the stopover of Alabama.

The entire crew would have been favorable to it that highlighted the crew who gave their lives to defend the Southern cause. And Rondin was well understood by highlighting priority these crewmen. That is why we find larger portraits of the crew with a purpose "blur" as if they were "ghosts" This was probably intended by Rondin to give a tragic dimension and shape and feel emotion in relation to this photograph. To date, although this has not been recorded accurately, nearly 25 members have been identified.

Secondly Ron is convinced that the photograph mosaic of the ship in the upper left is Alabama and it was taken just before the fight. This allows us to have a clear idea of the form of the vessel before the battle. The white band appears to have existed according to research by Ron. The hull dimensions obtained from the man who is single storey at the front of Alabama (used as ladders to measure) are between 200 and 220 feet. The size of the mat is also associated with known values. The chimney is not visible in the photograph because it was telescopic. Ron has found so far 14 points of similarity with Alabama.

On the other hand seem to float behind the ship as "trophies" flags of the 100 vessels he defeated during his journey almost 2 years. We trace in a work period that Semmes had brought many documents before the battle but was left on board the 100 flags of victory. This information remains in check.

Ron has also studied photography entitled mosaic Kearsarge. In the archives, we trace the existence of a photograph taken by Rondin seen by an English writer and one man crew of Kearsarge (named Kinby) called Mosaic Kearsarge on which we can see the photograph mosaic of the naval off Cherbourg. This is he seems to photography that I have in my possession.

Rondin may have used a revolutionary at the time with a lens system so as to "zoom" from the top of the church Querqueville battle that took place at 4 or 5 miles from shore. The legend says that photography exists, and it may be that we find in the photograph mosaic named Kearsarge (center top) Alexandre Lecoeur, photography historian in France, told us he seems the existence of a patent filed by Rondin. If we try to find him there in order to know the exact content.
The data I've provided is only a small part of the scope of work by Ron.
Posted by Dennis Segelquist at 11:13 AM

Dennis, I just thought you may like to know that at least three or four of the photographs you show on this particular page, of the USS KEARSARGE, are already in the public domain, and available freely to use, as shown at the United States Naval Historical Center's photographic images of the KEARSARGE at http://ibiblio.org/hyperwar/OnlineLibrary/photos/sh-usn/usnsh-k/kears-o.htm

I have been visiting various blogs for my term papers writing research. I have found your blog to be quite useful. Keep updating your blog with valuable information... Regards

I have 3 photos of a gentleman. I think that he is possibly a confederate marine. Can anyone help identify the uniform or gentleman? I did not know how to post the attachment.

Monica, I don't know either, if you would go to by profile and get my address and send me the photo and I will take a look, and send any info you have on them and I will do a page on the them you may get some answers.

HI , I have a great portrait photo of a sailor who who has the USS Constitution or Constellation on his hat. I ave had the Uniform verified by by the folks @ the USS Constitution as circa 1860-early 90s.I bought this from an auction of the Abraham Lincoln Civil war museum ,Toledo University.
I would love to get the real story of which ship? Can you help. I have a name & studio that was under the tin tabbed back with oval rounded glass . Very unique Pic How do I post it ?
Thank you ,
Joe C

Hi joe, First the picture has to be scan and put in your picture file. Then go to your mail and open compose, then write the info you would like me to know. When done go to the bottom of the page and look for ( Add Attachments ), push on this and it well open to your browser, push on it, it will link to you picture files, push on the picture you want to send. The address should show up in your browse if so push ok, then send.

Now I don't know what mail carrier you use but they all should work about the same.
DEnnis S.

Joe I for got to give my address.
dsegelquist1@cox.net or you can find it in my profile.
Dennis S.

Over the years you have done some research on the CSS Alabama and I'm glad to hear that the findings of that research can be found at this site. Our college paper writing service is looking for the best essay writers to cooperate with us!