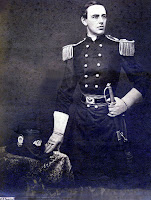 Civil War Union Army Officer. He served during the Civil War as Colonel and commander of the 2nd New Jersey Volunteer Infantry. He was killed in action at the Battle of Gaines Mill, Virginia, and his body was never recovered from the field. A cenotaph to him was erected in his family's plot in Mount Pleasant Cemetery, Newark, New Jersey.

No. 173. Report of Captain Edwin Bishop,
Second New Jersey Infantry, of the battle of Gaines' Mill.

SIR: I submit the following report of the action of yesterday, in which Companies D, H. I, and K, of this regiment, were engaged, under Colonel Tucker:

The battalion left camp about 3.30 o'clock for Gaines' farm, the scene of action, where it arrived about 4 o'clock, and was ordered by General Taylor to support Major Hexamer's battery, but soon was sent by General Porter, commanding, to relieve the Fourth Michigan Regiment (Colonel Woodbury), posted along the edge of a thick wood about 500 yards to the front and left of the battery, which position was maintained under a heavy fire for about half an hour. Our situation was such that we were totally unable to observe the movements of the enemy on our left flank, and it was only when we received a severe cross-fire that we learned that that important point had been gained and the regiment on our left had already retreated. Owing to he superior numbers of the enemy and the want of support the battalion was forced to retire to the top of the hill, which it did through a perfect storm of bullets. Having reached the hill and formed in line of battle the number of men left was so small, the force opposing us so immensely superior, that it was thought by Major Ryeson (then in command, Colonel Tucker having been killed just after ordering the battalion to retire) better to retire to the top of the newt hill, which was then occupied by the bulk of our troops. On the was to the place designated Major Ryeson fell wounded in the abdomen, and many of the men fell killed or wounded, as the battalion was obliged to retire through a cross-fire of the enemy, and received two volleys of musketry from our own troops occupying the hill above, who evidently mistook us for the enemy.