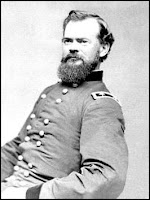 GENERAL: It is my painful duty to report that Brigadier General James B. McPherson, U. S. Army, major-general of volunteers and commander of the Army of the Tennessee in the field, was killed by a shot from ambuscade about noon of yesterday, July 22, at the time of this fatal shot he was on horseback, placing his troops in position near the city of Atlanta, and was passing by a cross-road from a moving column toward the flank of troops that had already been established on the line. He had quitted me but a few moments before and was his way to see in person to the execution of my orders. About the time of this sad event the enemy had sallied his entrenchments around Atlanta and had, by a circuit, got to the left and rear of this very line and had begun an attack which resulted in serious battle, so that General McPherson fell in battle, booted and spurred, as the gallant knight and gentleman should wish. Not his the loss, but the country's, and the army will mourn his death and cherish his memory as that of one who, though comparatively young, had risen by his merit and ability to the command of one of the best armies the nation had called into existence to vindicate its honor and integrity. History tells us of but few who se blended the grace and gentleness of the friends with the dignity, courage, faith, and manliness of the soldier. His public enemies, even the men who directed the fatal shot, never spoke or wrote of him without expressions of marked respect; those whom he commanded loved him even to idolatry, and I, his associate and commander, fail in words adequate to express my opinion of his great worth. I feel assured that every patriot in America on hearing this sad news will feel a sense of personal loss and the country generally will realize that we have lost not only an able military leader but a man who, had be survived, was qualified to heal the national strife which has been raised by ambitious and designing men. His body has been sent North in charge of Major Willard, Captain Steele and Gile, his personal staff.
I am, with great respect,
W. T. SHERMAN
Posted by Dennis Segelquist at 10:13 AM