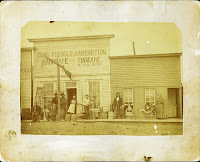 
Frederick C. ZIMMERMAN, dealer in a general line of hardware, guns, ammunition, crockery and glassware, stoves, pumps, lumber and building material, agricultural implements and wagons. He opened business in 1872, being one of the first traders in Dodge City. He first carried a stock of $3,000 in fire arms and ammunition only. He now carries a stock of $15,000 and employs three men. He has a fine residence one mile west of Dodge, with 240 acres of land. He was born in Prussia, Saxony, Germany, 1883 (sic). When he was only twenty six years old, he was foreman for Gastrine Renett, gunsmith, Paris, France, and had charge of forty men. He came to New York City in 1863, and worked at his trade of gunsmith in may portions of the Eastern States. He was married in 1865 to Miss Matilda Messenger, of Wurtemburg, Germany. They have two children living, Arthur and Clara. William, Adelia and Blanche are deceased. He is a member of the Knight Templar Lodge, A., F. & A. M., of Great Bend. He was a member of the County Board when Ford County was organized. He served as County Treasurer four years, and is present County Commissioner of the county.
Authors note: One interesting event that happen at the Zimmerman Hardware store happen on September 8, 1879. Two gentleman by the names of B. Martin and A. H. Webb, there had been bad blood between for a long while. On this day they were on the streets talking and one thing lead to another Webb left mad and the more he walked the mader he got. He headed for the Zimmerman hardware store and asked Mr. Connor to loan him a pistol, but he was refused. Webb left mader then ever and headed for home where he got is horse and Winchester and headed back to town. He found Mr. Martin setting on a bench and walked up to him and raised the rifle with both hands and brought the barrel of it down on Martin's head, which in the end would kill him. A numer of people saw what happen and when Webb started to leave on his horse a number of the citzens stopped him. Marshal Bassett, took him to the calaboose. A crowd soon formed and were in favor of a good Lynching, Bassett decided to take Webb to the County Jail for his safety.
Posted by Dennis Segelquist at 3:49 PM

Nice blog work. I came across your blog while “blog surfing” using the Next Blog button on the blue Nav Bar located at the top of my blogger.com site. I frequently just travel around looking for other blogs which exist on the Internet, and the various, creative ways in which people express themselves. Thanks for sharing.