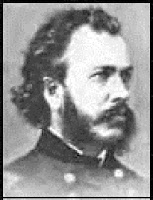 Civil War Union Brigadier General. Born in Swanville, Maine, he was a US Customs Agent when enlisted into the 4th Maine Infantry and was appointed Major. Promoted Colonel of the 14th Maine Regiment in November 1861, he was sent to Louisiana. There he was placed in command of a brigade in the XIX Corps, Department of the Gulf and was promoted Brigadier General. He participated in the Red River Campaign and in July 1864, was sent to Washington D.C. remaining on clerical duty until the end of the war. After the war, he engaged in the practice of law in Boston until his death.

From the Official Records of the Union Army.

Colonel Nickerson, of the Fourteenth Maine, had his horse shot under him by a discharge of grape. He sprang from under his dying steed and waving his sword called upon his men for one more charge. The men sprang forward with three rousing cheers and drove back the advancing foe.
Posted by Dennis Segelquist at 6:51 PM