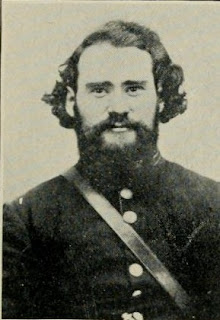 Comrade Henry B. Bullard, of Guilford, who had been sick with typhoid fever for a week, succumbed, and his comrades found him a resting place under some giant yellow pines just outside
the city.

It was with heavy hearts that the comrades set about the task of burying their dead brother. Not one but wondered how soon new graves might have to be made, and those who were then engaged in the solemn duty might be the next to be laid under the sod. It was not Comrade Bullard's fortune to fight under the flag of his country, he died of disease, not from an enemy's bullet, but his heroism was the same. He had died for his country ; he had given his life for his flag :
" His hands were folded on his breast ,
There is no other thing expressed.
But long disquiet merged in rest."
HENRY B. BULLARD,
of New Haven, Conn.

Enlisted Oct. i6, 1861 ; mustered in Nov. 2, 1S61 ; died of disease contracted on Ellwood Walter, Feb. 6, 1862; buried Beaufort, S. C.
Authors note.  He was later buried at Nut Plains Cemetery, Guilford, New Haven County, Connecticut..
Had he lived he would have brought no discredit on old Connecticut's flag; in the thickest of the fight, in the miseries of camp life, in all the hard  ships to be endured, he would have been at his post a worthy comrade, a brave man, a good citizen. And in his far-off grave beneath the pines he was not forgotten by his comrades, who prayed oft:
" Let angels spread their wings above ;
Let flowers forever bloom ;
Let bays, green bays, spring forth to mark
Our Comrade's sacred tomb."

Posted by Dennis Segelquist at 12:49 AM