From Confederate and Union Officers and Men From Tennessee.

Authors note.. Members of his staff was also listed, but was not recorded here.


From the Military Annals of Tennessee. 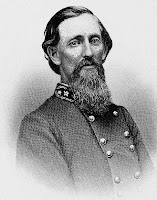 In the battle of Franklin none occupied a more exposed position than the Nineteenth, and none more fully accomplished all that could be asked of flesh and blood. Its right rested on the west side of the Co- lumbia turnpike. Charging across the plain, the enemy were driven from their breastworks. Several men of the regiment clambered over them in the face of the enemy concentrated behind the buildings a few yards distant. Finding them- selves between two tires, they sought such protection as was afforded. Sergeant Lum. Waller, of Co. E, than whom no truer man lives, was wounded at the end of Carter's brick smoke-house by the fire of our own men the enemy firing from the opposite end  and lay there all night. This building still stands, bearing the marks of over one hundred bullets. Here fell our beloved brigade commander, Gen. Strahl. He died upon the enemy's works about midway of the Nineteenth Regiment. During the engagement he took gun after gun from the men below and fired at the enemy. A private of Co. A, Zack Smith by name, whom Gen. Strahl had punished for some act of insubordination, seeing the General on the works and firing at the Federals, scrambled up to his side, and as the General fired he fired. The General, struck with admiration, patted Zack on the shoulder and said: "Go it, Zack; 1 will never forget you for this"


Posted by Dennis Segelquist at 4:07 PM