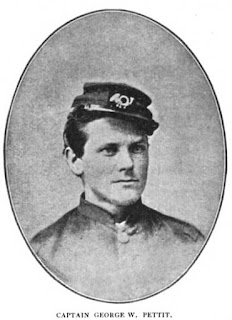 Capt. George W. Pettit, a well known veteran of this city and for many years a grocer on the East Side, died Sunday afternoon at 2:40 o'clock St his residence on Highland Avenue. He had been ill for several weeks. Mr. Pettit was born at Hoosick January 31, 1844, and lived in his native town .until 1881, when he removed to this city.

When the Civil War broke out he enlisted as a private in Company G, One Hundred and Twenty-fifth New York Volunteers. On May 15, 1882, be was promoted to be Corporal and on February I8, 1884, to Orderly Sergeant. He was made Second Lieutenant September 24, 1884, and First Lieutenant on November 28, 1864. Mr. Pettit acted as Adjutant of the regiment for a time in front of Petersburg and received his final promotion on March 1. 1885, when he was made Captain of Company H.

Captain Pettit participated in the thirty-two battles in which his regiment was engaged, and he returned home with his command ln 1865. Chaplain Ezra D. Simons in his regimental history said of Captain Pettit: He was one of the primmest, bravest little soldiers that ever buckled a sword.

The record made of Captain Pettit's valor and good service, as of the valor and good conduct of other officers and enlisted men, is not an afterthought, penned only In view of this history, but distinct record was made of the courage displayed and the ability and fidelity manifested while yet these were matters of observation." Captain Pettit was brave to a fault end was only too eager to show his devotion to his country on the battlefield.

The men under him loved and trusted him, and would follow him wherever he led them. Captain Pettit was a member of Post Tlbbits, G. A. R., and a Past Commander of the post, and was Treasurer of the One Hundred and Twenty-fifth Regimental Association. Mr. Pettit was a member of the Veteran Boys In Blue Republican Club. Mr. Pettit returned to this city at the close of the war and. with the exception of about two years, had always lived in Troy.

He was for a number of years employed at the factory of Earl A Wilson, and then opened a grocery store at the corner of Pawling and Maple Avenues. He continued In this business for about twenty years and retired about three years ago. Mr. Pettit then removed to Round Lake, and after spending about a year there returned to this city end took up his residence on Highland Avenue.

Captain Pettit had a wide acquaintance and was respected by all who knew him. He was a member of Trinity Methodist Church. The survivors are his widow. who was Miss Jennie M Chisholm, and a daughter Miss Maud Pettit; also a brother David Pettit, and two sisters, Mrs William Sweet and Miss Jennie L, Pettit of Gilman. Ill.

The funeral of Captain Pettit will be held to-morrow morning at 10 o'clock at the residence. The service will be conducted by Rev, Robert L. Thompson of Trinity Methodist Church, assisted by Rev. H. M, Boyce of Schuylerville and Rev. A. I. Clerk of Round Lake. Selections will he sung by a quartette composed of Miss Gertrude E Shacklady, Mrs. Edna Herrich Peck. George W. Reynolds and Herbert G. Vanderpool. The Grand Army funeral service will be held at the residence tonight under the direction of Post Tlbbits. The members of the One Hundred and Twenty-fifth New York Volunteers are invited to attend the service as are the members of other posts. The interment will be at Cambridge.