ISLAND NUMBER TEN.
WE publish on a view of ISLAND NUMBER TEN, which was surrendered by the rebels on April 7 to Commodore Foote. Our picture is from a sketch by our artist, Mr. Alexander Simplot. The following account of the place will be read with interest:
Arriving at No. 10 I found more than space will allow me to write. Sixty-one large guns, mounted upon a dozen batteries, would have commanded the river had it not been for the fact that they were spiked by the discomfited and surrendered rebels with rat-tail files, and the Grampus and other rebel gun-boats lay sunk in the river between the island and Tennessee shore.

Great piles of provisions were stored upon the bank, which the Confederates, in their haste to evacuate, had failed to destroy, and tent of all descriptions, with camp paraphernalia, occupied the positions and places assigned to them at the commencement of the siege. The Hickman wharf-boat, which the rebels had stolen, lay on the inside of the island, laden with some forty thousand dollars' worth of stores of all kinds, and all in good order. Our own transports were busy taking care of the abandoned property, while our troops were engaged in securing trophies of the victory.

The works upon the island are of less extent than those upon the main land, and, with the exception of the upper battery, are not so strong. The island is very high, affording fine positions for long ranges, but rendering their guns useless when closely approached, as in the instance of the gun-boats running the blockade, when they hugged the shore closely, causing the enemy's shots to pass over their decks.

VIEW OF STEAMERS SUNK BY THE REBELS BETWEEN ISLAND NUMBER TEN AND NEW MADRID.—SKETCHED BY MR. A. SIMPLOT.

Note. All photo's can be enlarged by pushing on then.

Pensioner of war from the Island No. 10.

Amelia Davis, born in East Brandon, Vt. ; is about thirty-three years of age; left Vermont at the age of 18; has lived in many parts of the Union; has been married twice. Her present husband is a seafaring man, whom she married in Baltimore two years since. Both husband and wife were respectively employed as cook and stewardess on board the steamer Red Rover when taken by General Buell at Island Numbers 10 and both sent prisoners to Camp Douglas together with a little boy eight years of age. Does not know that she has any relatives alive.

GENERAL: Firing has almost ceased this evening. Federal troops are moving down the river from New Madrid. Gunboats still go up to Tiptonville in the night. A good deal of sickness in the command. Steamers here are the Grampus, Mohawks, Kanawha Valley, and Champion, small boat Red Rover with floating battery, Ohio Belle, Simonds, Yazoo, De Soto, Mears, and Admiral. The small boat used as watch boats, &c., the large one as hospitals.

A Ship That Fought The Fever Description: view of the USS
Hospital, also known as the "Red Rover" Date: 1862 Source:
Miller, Francis T., The Photographic History of the Civil War Volume 1. 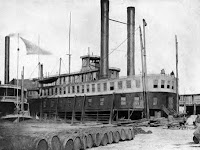 
I have a friend by the name of Bud Shortridge, who has a naval web site and has just finished a in depth report on the “Red Rover”, His report tells how the Red Rover Hospital came about and what was the end of it’s use. This report contains many photo’s and is a must read for anyone doing research on this grand ship.

Posted by Dennis Segelquist at 3:30 PM