COLONEL: At the request of Major-General Rosecrans, I have the honor to make the following report of Private William J. Carson, bugler in the First Battalion, Fifteenth U. S. Infantry;

On Saturday, September 19, when the regular brigade was falling back, he behaved with most conspicuous gallantry; with a sword in one hand and his bugle in the other, he sounded constantly the "Halt," the "Rally," and the "Forward;" espying a stand of colors belonging to the Eighteenth U. S. Infantry, he rushed up to them and sounded "To the color." His conduct attracted the notice and elicited the admiration of the whole brigade. On Sunday, September 20, before our battalion was engaged, the Eighteenth, being pressed by vastly superior numbers, was falling back; Carson by some means became the possessor of a musket and constituted himself a "provost guard." One of the officers attempted to pass him, but he positively refused to allow it, stating that it was against his orders. All this time he continued to sound the various calls on his bugle. I regret to state that his fate remains a mystery; he was last seen by me late on Sunday afternoon behind the breastworks. I can only hope that he is a prisoner.

I have the honor to be, very respectfully, your obedient servant,
ALBERT B. DOD,
Captain 15th U. S. Infty., Comdg. Batt. at Chickamauga. 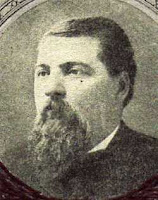 Saturday morning, October 31, at sunrise, Private Isaac S. Curtis, of the Ninth Virginia Cavalry Regiment Co. A., and myself passed the enemy's pickets, stationed at a mill near Weaverville, entering the enemy's camp, passing their pickets after daylight, whistling so as not to cause suspicion. We were disguised in Yankee overcoats.

Going to the house of Mrs. Weaver, in Weaverville, we saw a sentinel in the front yard. We passed him without his noticing us in rear of the house. We discovered three Yankee tents. Riding around to these tents we dismounted and proceeded to capture 6 Yankees who were asleep in them, and 6 horses, which we made them saddle and mount, and then rode back in the same direction, whistling as we passed the pickets. These men were a cattle guard, and were well armed.

We brought out 3 pistols, 1 carbine, and 1 saber. We were unable to bring off the cattle for the want of them enough to drive them. One of the Yankees escaped after we had passed the pickets of the enemy. The other 5 were delivered at Richards' Ford.

General Meade's headquarters were near Weaverville-in less than 800 yards. The capture was made about sunrise in the morning.

Side Note. CURTIS, ISAAC S.: Enl. 7/20/61 in Co. A, age 19. Absent sick, May and June 1862. Absent on detached service as scout for W.H.F. Lee, Nov. 1863 thru 10/6/64 last roll. Alive in 1912 in Sherman, Texas, engaged in the lumber business. He is mentioned often in the William Campbell memoir in William & Mary Quarterly. Curtis killed a member of the 18th New York near White Chimneys who was attempting to rape a Caroline Co. woman.
Posted by Dennis Segelquist at 12:00 PM