I got interested in these two gentlemen when I received a mail from Tom parson a park ranger of the Shiloh National Military Park, thanking me for having some of the information on one of the gentlemen he was looking into, which I will talk about at the end of this page. I found the information interesting and I hope you well too.
-----------------------

GENERAL ANDREW JACKSON SMITH, has recently come prominently before the public as commander of the Red River Expedition, was born in Pennsylvania, and graduated at West Point in 1838, in the same class with BEAUREGARD and HARDEE, of the rebel army, and Generals BARRY, M'D0WELL, and other officers in the Federal service. For seven years he was Second Lieutenant in the First Dragoons, with whom he served during most of that time in the Territories.

In 1847 he was made Captain, and served against the Indians 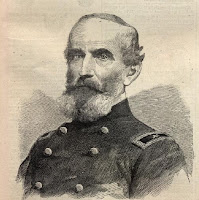 in South Oregon. In 1861 he was appointed Colonel of the Second California Cavalry, and in March, 1862, was made Brigadier-General of Volunteers. In October of that year he was placed at the head of the First Division of General GRANGER'S army in Kentucky; but subsequently was attached to General GRANT'S army, as commander of the Tenth Division of the Thirteenth Corps. General SMITH led the right .division in the attack on Vicksburg in December of that year, and afterward commanded the Second Division of the Thirteenth Corps at the battle and capture of Fort Hindman, Arkansas Post, in January, 1863.

After the return of this part of the army to the vicinity of Vicksburg, General SMITH was placed in command of the district of Corinth, from which post he was removed to take charge of the post of Columbus, Kentucky, in order to keep open the communications along the Mississippi River with General GRANT'S command, near the rebel strong-hold. Having cleared that part of Kentucky of guerrillas, General SMITH was, on January 24, 1864, relieved of his post command, and ordered to lead the Third Division of the Sixteenth Corps in the Sherman expedition through Central Mississippi. After the return of the forces under General SHERMAN to the Mississippi River, General SMITH was placed in command of the Red River Expedition, which he has so far led to victory.

The details of the advance, the fight, and the victory of General Pleasanton's cavalry—under Generals Buford, Kilpatrick, and Gregg—at Culpepper, on Sunday, show that it was not only a brilliant but an important affair, and may probably be regarded as the advance movement of General Meade's army. The cavalry crossed the Rappahannock and reached the banks of the Rapidan; came into collision with Stuart's cavalry and the light artillery of the enemy, and, after a series of skirmishes, drove them from point to point until they reached Culpepper, through which town they charged, driving the rebels before them, and capturing over one hundred prisoners and three guns, two 12-pounders and one 6-pounder. A large quantity of ordnance stores were found in the railroad depot at Culpepper, the guns being of English make, with sabre bayonets attached. General Buford's division followed up the enemy beyond Cedar Mountain, and encamped on the banks of the Rapidan.

Civil War Confederate Brigadier General. Graduated West Point in 1841. Veteran of the Mexican War. Appointed Brigadier General on September 2, 1862. General Buford took part in the Vicksburg campaign, and later assigned to General Nathan Beford Forrest Calvary corps until Forrest's surrender at Selma in April 1865. He served a term in the Kentucky legislature after the war.
-----------------------------

As I stated earlier Mr. Parson give me a thank you for my site and along with his thanks he stated what he was looking into. I found it interesting and got to looking around and the end result is this page, so it is my turn to say; “Thanks Tom.”
*********************

Thanks on an excellent site. I was in search of officers in the 1st U.S. Dragoons prior to the Civil War. I found everything I was looking for, on your site, Well done.

I am writing an account of the Campaign and Battle of Tupelo, Mississippi, July, 1864. The Federal commander was Major General Andrew J. Smith, a former officer in the 1st Dragoons who rose from 2nd Lieutenant to Captain in the Dragoons and then to Major in the 1st Cavalry. I was interested in finding which officers, Union and Confederate, who served with Smith in the pre war army. Of particular interest was Abraham Buford who later joined the Confederate army and commanded a division at the Battle of Tupelo. The 1st Dragoons was a virtual "Who's Who" of Civil War commanders.