While I was doing some research on Sheriffs of Kansas, I ran a cross Josiah Clark Redfield, and found so much on him and his family that I decided he should have a page of his own. Now I can’t take credit for this research that goes to ( Mr. Ray Downing ), who I feel did a great Job, and has many pages on the net about this family. While I put this information in a order that I felt would be pleasing to my readers.
--------------------------------------- 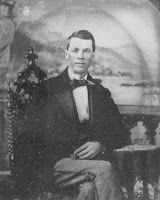 Son of Sylvanus Graves Redfield and Esther Clark Redfield. Kansas Territorial pioneer. First settled Geneva, Allen County, KS, in April of 1857. Sheriff of Allen County 1861 - 1865. Receiver of Land Grants, appointed by Pres. Lincoln in 1864 and again by Pres. Grant in 1872. Served in Kansas State Legislature, 1869-70. Went to Wellington, Kansas, in 1885, where he built the Wellington water system. Removed to Wichita. Justice of the Peace and Sedgwick County Commissioner.

Josiah married Hannah Augusta Nichols in Ohio in 1859, and they immediately set out for Kansas Territory where they spent the remainder of their lives. They had six children: Flora, Frank, Carrie, Kate, Belle, and Pearl. Josiah died in Ohio while on a visit, but his remains were returned to Kansas for burial. 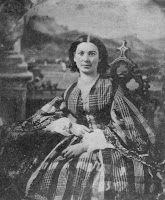 Hannah A. Nichols, daughter of Col. Caleb Nichols and Amanda Parks Nichols, became an early pioneer to Kansas after her 1859 marriage to J.C.Redfield. Arriving in covered wagon in Humboldt, Allen county, she tended the jail while her sheriff husband was away. Local Indians occasionally caused fright, but her firmness in dealing with them caused no problems. Hannah later removed to Wichita when J.C. was appointed Land Commissioner, where she raised six children in those early, rustic pioneer days. After J. C.'s 1904 death, she returned to Ohio to live with a daughter until her own death three years later.

"Monday forenoon the painful intelligence reached this city that death had visited the family of Hon. J.C.Redfield and taken away one of the brightest members of his household. Early in the morning his daughter Carrie ("Little Cattie", as she was familiarly called while living here) died of scarlet fever. The death of Carrie was more than the grief stricken mother could bear, and the same dispatch that announced Carrie's death also contained the sad news that the mind of Mrs. Redfield had become deranged. She appears to be unable to recognize family members. This is indeed heart-rendering, and the sorrowing family have the earnest and heart-felt sympathy of their numerous friends in Humboldt."

Wife of Charles Baldwin Harris; mother of Dorothy, Howard, Frank, and Charles Harris Jr. She was the daughter of Josiah Clark Redfield and Hannah Nichols Redfield, who were very early pioneers into Kansas Territory in the 1850s. According to descendants, all four children were supposedly buried in Oakland Cemetery, Dallas, TX., but cemetery records fail to support the claim for all except Charles Jr.

Daughter of Josiah Clark Redfield and Hannah Nichols Redfield. She was also the 6th great granddaughter of John Alden and Priscilla Mullins of the Mayflower.

Born the same year that Edison patented the phonograph, Pearl suffered from hearing disability in her adult life. She married George D. Downing in 1899 in a double ceremony with her sister, Belle Redfield (Harris). Pearl's three children and her grandchildren were her greatest joy in life, along with a deck of cards or a crossword puzzle.

There were two other children; Flora Redfield and Kate Redfield, but I was unable to find any information on them.
Posted by Dennis Segelquist at 11:22 AM

Oh, my, what a delightful find! Must note that I have found information on Flora and Kate.

For the sake of completeness.