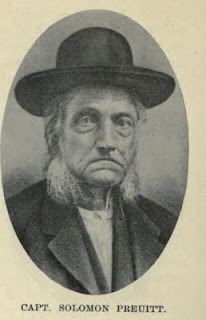 Solomon PREUITT was born on 7 Jan 1790 in Abington, Washington, VA. He died on 9 Jan 1875. He was buried in Madison Co., IL. Solomon Preuitt was active in the settling of this part of the country. He was elected Captain of a Military Co. at the age of 21. In 1813 he volunteered and joined the rangers in the war against Great Britain serving until peace was declared. In 1831 he was sent as a Captain of a spy company against the Indian Chief Black Hawk, returning after peace was signed. In 1832 Black Hawk reopened hostilities. Solomon Preuitt volunteered and was made Captain and later Lieut. Col. of the regiment. At the close of the war the people elected him Major of Militia, an office which he held for many years with credit to himself and the battalion.

Solomon Preuitt wrote the following to James T. Hair, Publisher of Alton, Illinios: In 1767 when my father was 15 years of age he went to the wild woods of Kentucky in company with his father, Martin Preuitt, Daniel Boone, John Finley, Isaac Belcher, and other hunters. They staid nine months when they returned with their furs to North Carolina. My father married my mother, Mary Woods, some five years after his return from this hunting expedition. When the Revolutionary War commensed my grand-father and my father joined Gen. Washington's army and served as soldiers till the colonies gained their independence. During the war Gen. Cornwallis of the British Army sent Ferguson with fourteen hundred Tories to break up some new countries along the frontier. When the backwoods mountaineers heard the news, they rallied together near King's Mountain. My father with his brother, Isaac Preuitt and my father-in-law, Philip Higgins, all took a part in that battle. Before the attack was made a council was held in which it was decided that all should return but one thousand picked men, who led on by the brave Campbell Servier, Shelby and Williams, ascended the hill, and commenced that attack. Like Sinai of old, the top of the mountain was wrapped in smoke and flame as the leaden hail came whizzing from every quarter. In forty minutes, Ferguson was slain and he entire command destoyed, either by death, wounds or prisoners. Martin Preuitt died at the age of 98 years. Martin Preuitt, Jr. died at the age of 92 years. Solomon Preuitt died at the age of 86 years. Jacob Preuitt died at
the age of 92 years.

(This report taken from the account given in the Gazetter of Madison Co.,
Illinios of 1866) Parents: Martin, Jr PREUITT and Mary WOODS.