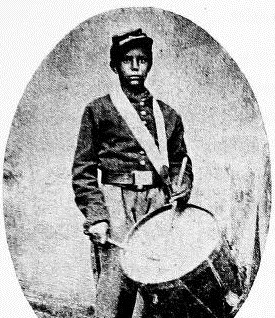 The following information was given by Bob McKay.

Miles Moore was my grand mother, Edna Mabel Moore's Grandfather. Miles was married to Ardele Moore, lived in New Orleans after the war and had three kids The middle son Richard fathered my grandmother. According to Miles muster records he was paid $7 a month as were all the "colored" troops in the 54th. Records also indicate that he was "owed $100 bounty" when he mustered out but no indication that he received it. Miles was listed as an "invalid " in 1897 and Ardele was granted a pension, then granted death benefits in 1904. He died back in NY. For more detailed info on Miles and other young Civil War recruits see G. Clifton Wisler's "When Johnny Went Marching".
Posted by Dennis Segelquist at 11:52 AM