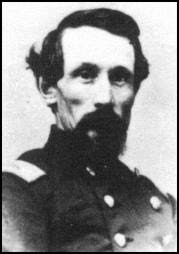 Civil War Union Brevet Brigadier General. Served in the Civil War as a 1st Lieutenant in the 1st Connecticut Volunteer Infantry before being transferred to the 7th Connecticut Volunteer Infantry. With the 7th Connecticut he rose to Lieutenant Colonel and commander of the regiment. He received brevet of Brigadier General, US Volunteers on March 13, 1865 for "conspicuous gallantry at the first assult on Fort Wagner, Morris Island, S.C.". However, it was not acted upon and confirmed by Congress until March 3, 1869.

Posted by Dennis Segelquist at 12:19 AM