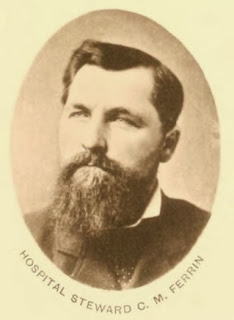 p. 128, C. M. Ferrin, the hospital steward, attended to the wants of the ailing in the trenches. And to his credit it should be recorded, that his kind and skillful care saved many a soldier from severe illness, and he performed a noble service by his brave and tireless attentions to the wounded in times of battle.

p. 135, A singular illustration of the power of imagination was discovered at one time by Hospital Steward Ferrin. He was hastily called to a man who lay groaning on the ground, who declared that his foot had been completely shattered by a ball.  The steward removed his shoe and stocking, and found the pedal extremity perfectly sound â€” the ball had struck his shoe and glanced off.

p. 263, Hospital Steward C. M. Ferrin controls a large practice as physician, and is held in high esteem by all the old comrades

as secretary of the Eighth Vermont Society.
Posted by Dennis Segelquist at 12:27 AM