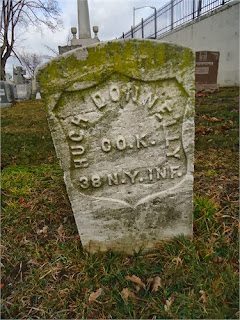 CASE. Private Hugh Donelly, Co. K, 38th New York Volunteers, received at the battle of Williamsburg, May 5th, 1862, a flesh wound of the shoulder. He was made a prisoner. While confined at Richmond he had a fall in prison, striking his head, and producing a depressed fracture of the right parietal bone. He was exchanged, and received into hospital at Camp Parole, Annapolis, on February 5th, 1863. He was deaf, and his mental faculties were very sluggish and obtuse. He was discharged from service for total disability on February 18th, 1863. Surgeon James Norval, 79th N. Y. S. M., reports the case
Posted by Dennis Segelquist at 2:51 PM