A US Postmaster in Dolliver, Iowa at the time of his death, this Civil War soldier's body was returned to the Rock Grove Cemetery so he could rest beside his wife Sarah, young daughter Zoa and his mother, Rebecca. Following his wife's death in 1902 he lived with his son, Charles, in Dolliver. War related injuries made it impossible for Samuel to continue life as a farmer. He had some of his land added to the village of Nora Springs where a street still carries his name and he operated a general store in the village.


Samuel Sullivan Statement as Prisoner of War.
Push to enlarge. 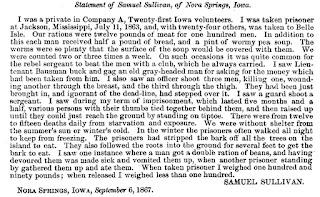 Posted by Dennis Segelquist at 11:35 AM